Eilean Donan: A visit to the ridiculously photogenic Highlander castle

If you, like me, grew up in the 70s and 80s you may remember the iconic Hollywood movie Highlander with Christopher Lambert and Sean Connery. A movie set in the 1500’s in the Scottish Highlands about a singled out immortal warrior who has to fight other immortals over the centuries to become “the only one”. A movie so groundbreaking in atmosphere, cinematography and score that it defined a whole generation. This movie singlehandedly projected a romantic picture of the Scottish Highlands to my generation that is unmatched by any other medium.

You may remember from the movie one scenic backdrop that is particularly remarkable. It is that of a Scottish castle on an island, connected to the mainland through a beautifully arched stone bridge. A castle, so picture-perfect, so quintessentially Scottish in appearance it has become synonymous with the term “Scottish Highlands castle”. This castle is called Eilean Donan castle, and it is located not far away from the popular Isle of Skye, en route of our road trip a couple of weeks ago.

I have visited Eilean Donan twice. Once in 1999 together with my brother (who himself had the urge to revisit the castle after having seen it for the first time 10 years earlier – talking about “attraction” in the most literal sense), and then again this year. The first time around it was just a very brief stint, and I am not even sure if back then you were able to visit it on the inside. I don’t remember seeing a tourist centre on the mainland, and sure enough looking at the buildings now they seem to have been built only a couple of years later after I first visited.

Let me tell you that in contrast to the Highlander movie which I watched again this week after many, many years, Eilean Donan has aged just perfectly. If you haven’t seen the movie yet don’t bother. I really don’t understand today how such a badly acted and composed movie could have had such an impact on a whole generation.

But if you are planning a trip to Scotland or find yourself close to the area, do have a look at Eilean Donan yourself. It is well worth the visit. 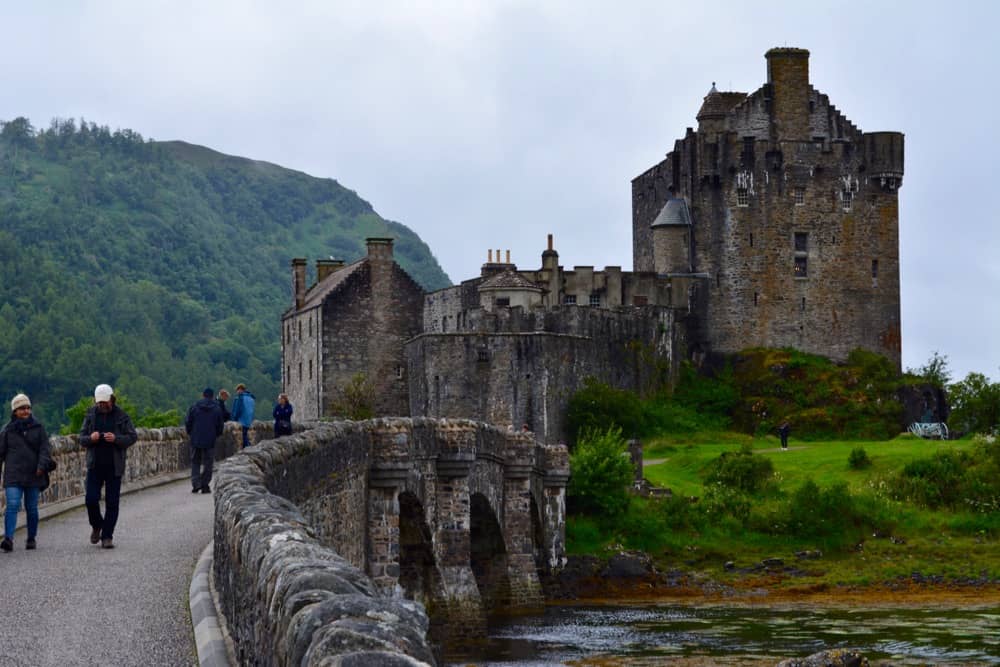 A word of warning though: Eilean Donan is not a medieval castle. It is a reconstruction from the 1920s. It follows the medieval plans as much as possible but it is not the real thing. But does it matter? I don’t think so. The castle has been rebuild with so much love by the owners and with so much care that you will still have a very authentic experience as a visitor.

The island on which Eilean Donan was built has seen a lot of action over the century. And when you are looking at it is clear why.

The location of Eilean Donan is strategically important, perfect for defending large stretches of land from incoming Viking attacks and other clans. Over the centuries, many defensive structures have been built here, but it was in the early modern times that the castle finally was brought down to its knees in the Jacobite Rising. The medieval structures just couldn’t withstand the modern gunpowder weapons of the English navy. In 1719, the castle was nothing more than a ruin, like a blackened broken tooth rising from the rocky outcrop of the island.

We can count ourselves lucky that there are visionaries and history lovers who are happy to take on projects like this ruin and turn them into perfect castles just like Eilean Donan. In 1911 Lt Colonel John Macrae-Gilstrap bought the neglected castle ruin and rebuilt Eilean Donan to what it is today.

To this day, the castle is still in use by his family, although it is not their permanent residence but rather their holiday home.

A visit to the castle can be broken down in three areas of interest: You can admire the medieval fortifications, the deep window seats, the tiny winding staircases, the bedroom chambers, the banquet room, the kitchen and the secret peepholes. It’s a castle that has not been built with tourist crowds in mind so it takes time to explore every nook and cranny on the inside and outside.

You can also enjoy intimate glimpses of the heirlooms, picture frames and furniture of the owners – it’s a bit like walking through a private apartment with the owners just quickly stepping out to allow you to have a closer look at the interior.

Lastly, Eilean Donan offers a bit of a history lesson, with some very exciting items on display in particular in the banquet hall such as locks of hair from Bonnie Prince Charlie, rare antique furniture and historically significant weaponry. In the apartments there are a handful of century old dresses in top condition, and the kids will probably love the completely restored medieval kitchen.

Now, the latter might at first sound a bit tacky – a kitchen complete with plastic food and props, mannequins and sounds from loudspeakers, but it’s so well done and comes with so many details that you can actually get a really good feel of what life on the castle used to be like back in the olden days.

Alas, we weren’t allowed to take pictures inside the castle keep, but at least I can share with your some impressions of the beautiful surroundings and the loch. Weather conditions weren’t perfect but I think you will still get a sense of why this castle is such a special place and one of the most popular tourist destinations in the Scottish Highlands. A highly recommended experience that shouldn’t be missed in any Scotland itinerary.

34 stunning photos of the Fairy Pools, Isle of Skye (and one story about how I got lost)