Treptower Park may be a little bit off the usual tourist trail but it has so much more to offer than you might think. We took the S-Bahn to this beautiful riverside park in the east of Berlin to catch the last golden rays of summer. We also wanted to find out if it was possible to catch glimpses of fabled abandoned theme park Spreepark from here (Spoiler Alert: The answer was “yes”).

What we found was definitely one of the most picturesques and entertaining parks in Berlin, popular not just with families and seniors but also with students and young professionals. Follow me as I explored some of the most iconic sights at Treptower Park!

An avenue of trees – poplars, lindens – led to the oversized Soviet Memorial.

From the riverside lawns of Treptower Park it was just a couple of steps to the massive Soviet Memorial on the other side of Puschkinallee. On this late summer’s day it was definitely one of the most beauitful places to be in Berlin, if somewhat slightly bizarre – the enormous dimensions, the overuse of weeping willows, the meticulously kept gardens, indeed the solemn silence turned this quiet place into an otherworldly experience.

The memorial was completed in the 1950s in what was then Soviet controlled East Berlin. It commemorated the 80,000 Russian soldiers who died in the last Battle of Berlin; 7,000 of them were buried in this spot – some say, in imported Russian soil. From the portal we walked towards the statue of a kneeling woman, Mutter Heimat (“Mother Homeland”). It was facing the main part  of the memorial, a soldier carrying a young child in his arms.

The pretty Mother Homeland statue was part of the Soviet Memorial at Treptower Park.

We felt as small as ants as we walked past the rows of sarcophagi, adorned with unreadable Russian script and animated war scenes. We climbed on top of the little mount to the feet of the soldier statue, looked at the straight lines and the canopy of trees. Yes, this was a war memorial, yes, they got it right.

Great views from the little mount that supported the soldier with the girl in his arms.

Riverside Park and the Island of Youth

From the Soviet Memorial we made our way back to the actual park near the river. We came past fountains and flowering gardens, now late in summer less of an attraction with their faded colours and dry leaves. But in summer, they must look and smell fantastic. Big lawns made way to wooded areas, people laying on the grass, catching the last rays of sunshine for this year.

Behind that, the dark blue ribbon of the River Spree glittered in the sun, ducks and swans gliding idly on the surface. A group of young people were taking their small wooden houseboat for a ride, bare-chested and free. On the shores, people sat and watched, naked feet dangling over the water. We followed the river to an arched bridge, Abbey Bridge, which connected a river island with the mainland. This was known as the Island of Youth, home to a beergarden and a stage, perfectly made for summer.

Pedalos and the arched bridge to the Island of Youth – Treptower Park was home to many more views like this!

Across the water we could see some typical Berlin sights. Expensive penthouse apartments with river views, minimalistic and cubic in style. Sober office towers in the distance, all steel and glass, topped by company logos. The TV tower in the centre of Berlin, seemingly just a boat ride away. And then the less picturesque parts of Berlin, the tall chimneys and industrial buildings, loud banging noises of industrial activity echoing across to the other side of the Spree.

We walked on, following the river all the way to an area that was known as Plänterwald. A wooded area, less tamed than Treptower Park, darker and more mysterious. A fence with barb wire kept curious visitors from walking deeper into the woods, signs in three languages telling people to stay off the property. This was the site of the abandoned theme park Spreepark.

Once, this had been a popular amusement park in Communist Germany. At a time when car travel was less common and distraction needed to be found nearby, many families would spend their weekends here by the river. Buying tickets to the rides, having picknicks by the water. After the fall of the Berlin Wall, the area was privatised and not well managed. The owner fled the country, leaving behind a derelict amusement park with broken rides and damaged dinosaurs.

While it wasn’t possible to enter the theme park to get a closer view for mere passers-by like me, you might want to join a guided tour of Spreepark. I did manage to see some of the abandoned rides through the fence, but it was no comparison to actually walking around the site and hearing more about the history of the place. I knew I needed to come back one day. 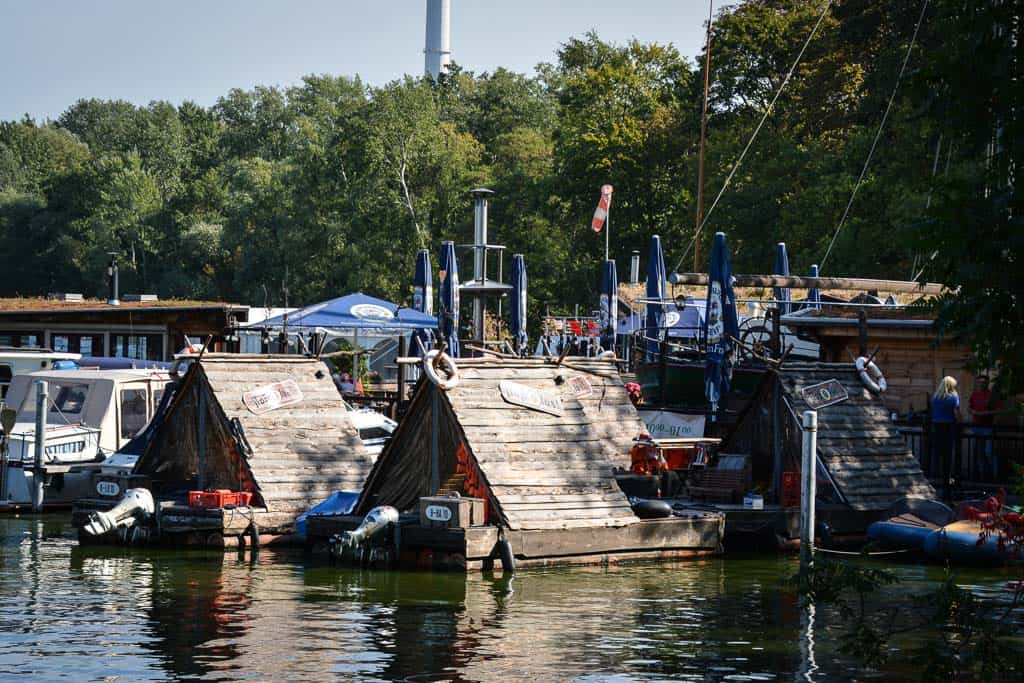 Near the Island of Youth you could hire canoes, pedalos as well as these tent-like wooden floats.

Treptower Park: Great Spot for a Summer’s Day in Berlin

It was time to go home to welcome the kids from school. We returned to the S-Bahn station, following the walkway along the river. Pedal boats were circling around the Island of Youth, joined by canoes. There was a ruined fisherman’s cottage covered in graffiti and with broken windows – typically Berlin. Just a few steps further we saw a traditional restaurant for day-trippers. Bookings were requested for Martin’s Goose lunches.

For those with less money in their pockets we eventually came past a string of snackbars selling foods from around the world. Pizzas and doner kebabs, toasted sandwiches and vegan food, a selection of Martini cocktails. It was also a popular stop to embark on river cruises to Berlin’s historic city centre.

Plenty of food options near the S-Bahn station, including beer, wine and cocktails.

Even though we had seen a lot, Treptower Park had so much more to offer. We could see that there was a massive children’s playground in the making. There was also a historic observatory that was a popular attraction in the east of Berlin. We knew now that we had to come back one fine sunny day, and this time take the kids too. More pix as you scroll down! ⇓

Berlin With Kids: A Comprehensive Travel Guide for Families

This 10+ metre tall fountain was just one of the many attractions in this Berlin riverside park. There were also flower gardens including a sunflower garden which must be very pretty in summer.

From Treptower Park you could get some amazing views that are so iconic for Berlin, including a view of the TV tower at Alexanderplatz.

The fisherman’s cottage was a witness of the time when this part of Berlin was still quite industrial. Treptower Park was established in the mid 1800’s.

People enjoying the last days of what had been a hot and glorious summer in Germany.

Napa, California, Offers so Much More Than Wineries