Travelling back in time at Lacock Abbey (Part 2)

After our stroll around Lacock Village, we can now make out Lacock Abbey in the distance. The picture in front of us couldn’t be more English even if it tried: Behind a glorious tree and a flock of grazing sheep the estate sits peacefully in its rural surroundings. Lacock Abbey is a former nunnery that was later turned into a country estate. It still has many of the original medieval features, including the cloisters and the chapter house.

Lacock Abbey is also the home of one of the pioneers in early photography, William Henry Fox Talbot, whose works and life can be seen at the museum in the rooms of Lacock Abbey. 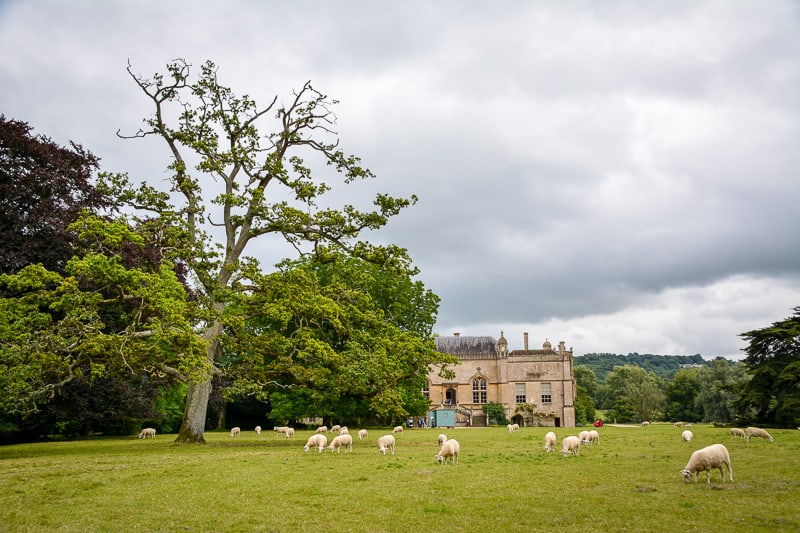 This is a beautiful estate throughout, and in such excellent condition, that film crews have discovered Lacock Abbey as the perfect backdrop for their period productions. The abbey stands in for Harry Potter’s Hogwarts, and it has been turned into a Tudor palace for the production of “The Other Boleyn Girl”.

Intrigued, we buy our entry tickets at the gatehouse and find our way through the lovely summer garden where the flowers bravely stand their ground against the grey skies. We marvel at flowers and plants in all shapes and sizes – purple delicate spots and bold yellow sunflowers, tufts of white milfoil, giant examples of clover with four leaves. You simply cannot help but love a good old English country garden complete with conservatory, lawn games, and monuments.

Through the elegantly formed arch we go and then into the inner courtyard where the more worldly areas of the nunnery are located. A quick look into the brewery reveals an enchanting whitewashed space where dried hops hang from the ceiling and pre-industrial machinery give us the scale of the medieval operations. I see an inscription in the cold stone near one of the windows, it says “J Martin” and “1853” in a curved script. When I touch it with my index finger it feels brittle and cool to the touch.

A romantic setting with medieval touches

We walk around the Abbey, past enormously sized windows. Some of them have pointed arches, others are more classical. There is ivy growing in places, adding some romance to the old stonework. The bay windows, in particular, take on the size of giants. When I sit the children under one of them for a photo they look like little mice.

Once inside, we can see that the Abbey rooms are raw and naked. The arches and ceilings, columns and vaults are still there, but the walls are devoid of decorations and ornament, the floors have no tiles. When you look closely, you can make out some signs and symbols in the crosspoints of the vaults, maybe family emblems from the women who used to live and pray here.

From the old abbey we step into the more modern part of the estate. The kitchen is not fully equipped but there are some remarkable contraptions left that have once helped organise the kitchen and thus the entire Lacock Abbey household. There are larder and shopping organisers, a bell system, and even a dumbwaiter.

The house of the Talbot family

The rest of the house continues to impress with some beautiful old rooms, grand in scale, yet homely and personal despite their size. The last owner of Lacock Abbey gave the estate to the National Trust in the 1940s and it hasn’t been changed or lived in since. That’s all we want to know about the Talbot family for today – we have little interest in the Talbot photography museum. The kids are dragging their feet and we skip the museum part of the abbey to slowely find our way to the exit.

Before we leave this grand estate through the main door we have the chance to fall in love with the stately entrance hall which copies many elements from the Middle Ages. Statues stand tall in stone niches some three metres above the ground. They look like kings and peasants, not like the kind of statues you would expect in such a setting. We can even make out a what looks like a torso of a wizard complete with a pointed hat.

There are indeed many things that we love about Lacock Abbey. What makes it outstanding is its elegant aesthetics.

There is a femininity and a delicacy in the arches and the gates, in the curves of the chimneys and on top of the turrets that I have never seen before. Maybe it is because the estate has its origins in a nunnery. If that’s the case, then it is remarkable how over the centuries the owners have managed to acknowledge the heritage of the building and the significance of the medieval architecture.

Even if you are not interested in seeing a Harry Potter set, the beauty of Lacock Abbey still speaks for itself. More photos on the bottom of this post.

Travelling back in time at Lacock Village (Part 1)

Eilean Donan: A visit to the ridiculously photogenic Highlander castle

The fantasy world that is Sintra

Travelling back in time at Lacock Village (Part 1)

5 Things you Can’t Miss on Your Trip to Sicily