Home Travel BlogEurope Travel BlogMalta Travel Blog The Grandmaster’s Palace in Valletta: The ghost of a cat, tons of armour and rare Gobelins

Malta wouldn’t be Malta as we know it today if the Muslims hadn’t conquered Jerusalem in 1291. This turn in history resulted in the exit of the Order of St. John who now needed to find not only a new home but also a new reason of existence. As service providers to the crusaders they had to find a new task and reason for existence. Their hospitals in the Holy Land were nothing more than a pile of rubble.

After years of uncertainty and the search for a new base in Europe, the knights eventually received the island of Malta to rule. And soon enough, their role in European politics were not just confirmed but widely appreciated. Not only did the Knights of the Hospitaller keep the Mediterranean safe from piracy. They also fought off the Ottoman conquest during the Great Siege of 1565.

Malta and indeed the whole South of Europe would be a very different place now had the Turks succeeded. Malta was a strategic outpost in the middle of the Mediterranean and a conquest would have been devastating.

The Clock Tower at the Grandmaster’s Palace is just one of the many details you can pick up when you visit this historic place in the centre of Valletta.

I understand if you think that all of that sounds like dry, boring history. But it helps to remember that real people used to life these histories. They breathed, they ate, they walked around, they fought in fierce and bloody battles.

One of the best ways to experience history is by visiting places that played a pivotal role in the history of a country. In Malta, the Grandmaster’s Palace is such a place.

One of Malta’s best kept secrets

Mind you, the Grandmaster’s Palace will probably not overwhelm you at first. Do not expect something that has the opulence and grandeur of some of the old European courts. This is not a second Versailles or Windsor Palace or the Vatican City. Malta, a small and rather isolated island, certainly couldn’t compete on the same level as the princely courts.

Yet, contemporary visitors did comment on the splendour and the comfort of the building. Between the lines you could definitely read a certain degree of envy.

If you take the circumstances into consideration you will still be positively surprised. The palace does have a magnificent display of frescos, suits of armour, Gobelin tapestries and paintings. In particular the State Rooms are worth the visit. It may not be a lot that you can see here, but the things that you do get to see will be quite astounding.

The Inner Courtyard of the palace is surprisingly green and peaceful. Even if you don’t want to visit the palace, just a peek inside the courtyard is very recommended.

The palace was built by the Knights of the Order of St John 500 years ago during the reign of Grandmaster Jean de La Cassiere. After that it served many years as residence of the Governor of Britain when Malta was Crown Colony to the British Empire. Today, it is the official residence of the Maltese President.

Consequently, not all rooms are open to the public at the Grandmaster’s Palace. You may find that considering the size of the complex you haven’t really seen that much at all.

But I don’t quite agree. There is a lot to discover in this old structure, and the devil is – as usual – in the details. For example, many visitors will fail to notice the lovely Pinto Clock Tower from 1754 with its set of pretty clock faces. It’s a matter of looking up and down and in the crevices and through open doors to discover the true treasures.

The State Rooms in particular are absolutely splendid. Along the walls you will see rows of empty knights’ armours that are standing guard to the daily visitors. I really loved the painted ceilings in the hallways. And if you look closely you may find a strange chute in the walls of the hallway – see if you can figure out what it was used for. I can tell you that it was definitely not used as a privy. 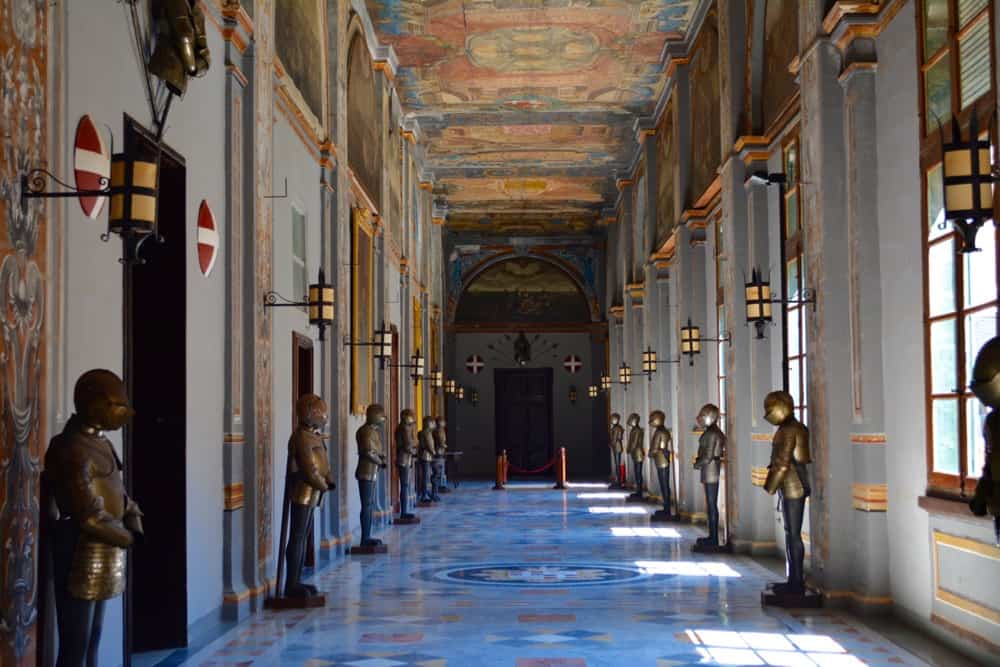 Armours line the walls of the palace. The rulers of Malta had a military background, so naturally arms and armour play a big role in the history of the country.

Another great highlight of the palace is the Grand Council Chamber where you can see a stunning visual narration of the Great Siege. A competent tour guide will be able to explain to you all the different stages, and it is really worthwhile listening to a Maltese telling the story which is such an important turning point in the history of Malta.

The paintings, unfortunately, are rather disappointing – they could do with some cleaning as the varnish is severely blackened. Hopefully, the curators will tackle this job some time soon to bring back the splendour of these official rooms.

Precious tapestries that you won’t see anywhere else

My personal highlight was a visit to the Tapestry Chamber. This used to be the room where the Grand Master would meet with a select group of councillors to decide on matters of importance. It’s a smallish room, very different from the magnificent throne room where a larger group of people could assemble.

The tapestries, also called Gobelines, come from Paris. They depict the world as the knights knew it back in the 18th century. You will see the most exciting and exotic plants and animals here. It’s an illustrious collection of what travellers would find in the most remote countries such as Africa, India and Brazil, hence the name “Les Teintures des Indes”. It is the only complete set in the world.

Unfortunately, due to the delicate nature of the tapestries they cannot bear exposure to sunlight. When you enter the room nearly complete darkness will greet you. You are not allowed to take photographs. You won’t see the brilliance of the colours, as they are in deep shadows.

But at least you can still see them at all. Until solutions are found to preserve the delicate nature of these tapestries for generations to come we will need to accept the limited conditions under which we can see them today.

The tapestries at the Grandmaster’s Palace are among the best in the world. They are very delicate which is why they mustn’t be photographed and can only be viewed with dimmed lights. Other parts of the palace like these reception rooms are beautifully decorated, for example with scenes of the Great Siege of Malta.

The story of the ghost cat

The Grandmaster’s Palace’s most cherished part by the public, however, is without doubt the armoury which is home to an extensive collection of weapons, all neatly categorised and displayed in the most orderly fashion. If you are a weapons and armoury buff then this place will feel like heaven to you: the sheer amount of helmets, rifles, guns and armour is just fantastic.

And with this your tour of the Grandmaster’s Palace will come to an end. Despite the small size and the lack of opulent grandeur outside the State Rooms, this palace is in my opinion well worth a visit if you want to understand a bit better the history of the Order and indeed the whole nation of Malta.

But wait! – You may have been wondering what the ghost of a cat has to do with it? As with many grand buildings that the British have laid their hands on over the course of centuries, the Palace of the Grandmasters is home to its very own residential ghost: a large cat. So if none of the above is tempting you to pay a visit then maybe you want to take the opportunity for your own private ghost hunt instead.

Don’t forget to order your copy before you go!

30 photos that prove that Valletta’s Baroque beauty is everywhere