The Different Quality of Light in Tarifa

The light, it was so different on the other side of Andalusia. When you travel on the N-340 from Algeciras westwards to Tarifa, you would barely notice that something had changed. The nuances were almost not noticeable, they were so subtle. Yet, from one moment to the next you would realise that the colours had changed, the climate had changed, the landscape had changed. From a temperate Mediterranean outlook to the wild and untamed flavour of the Atlantic Ocean.

In summer, it meant a light with a brighter, more brilliant quality. But now in winter, it was a more stormy outlook, with dark and brooding clouds that hung low under the endless horizon. Spain as we knew it was sitting in our back, waiting for our return later today.

But the western side of Andalusia was expecting us with open arms, welcoming us on our day-long escapade for a taste of freedom and fresh air, spiced with the exotic backdrop of an Africa unknown, a dark silhouette framing the endless blue of the ocean.

Tarifa: The Town of Three Stories

The winding road took us around the southernmost point of Spain, where different weathers would meet, sometimes unpredictably, sometimes violently. Windfarms captured some of that energy, standing like beacons on the desolate hills overlooking the Strait of Gibraltar. Just one more bend and then suddenly, in front of us the view opened up to a panorama of the Atlantic Ocean, an endless stretch of beach, and the eight-figure shape of Tarifa.

Tarifa, a town of three stories: location, history, and the surf. The most obvious one: The strategic position on the southern tip of Spain, just a few kilometres from British Gibraltar. We parked the car near the old watchtower and raced with the kids to the island, Isla de las Palomas. On the short causeway we had two different seas, one on each side, the Mediterranean to our left and the Atlantic Ocean to our right.

The winds tugged on our jackets as we approached the abandoned island that used to be a military base. To the left we could see all the way to Morocco – the ferry would take only 35 minutes to reach the African continent. To the right, an endless dreamy beach stretched all the way to the horizon, now in winter a welcome alternative route for horse riders and dog walkers. 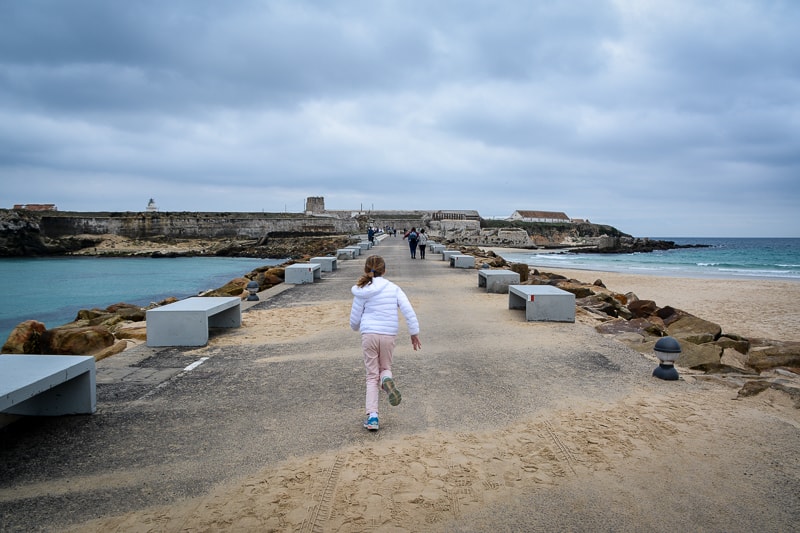 A History of Abandoned Buildings and Conquest

The island was closed off, so we turned around and headed towards the city for the next part of our adventure: Tarifa’s history.

There was a lot of it here; you would expect so, given the strategic position of the town. We walked past the old watch tower, a modern construction of the 20th century but embellished with Mudejar elements of pointed arches and round balconies. Like a palace or a private villa, but strangely surrounded by makeshift walls and sturdy looking closed doors whose unloved appearance unmistakenly told you to back off.

A spooky, abandoned place in the middle of town, where seagulls circled like ravens a haunted tower, mysterious and full of unanswered questions.

The most obvious historic place of Tarifa, however, was the old castle of Guzman El Bueno. Originally a Moorish castle, a thousand years old, it was today named after the man who had recaptured the town from the Moors, sacrificing his own son in the process.

We climbed the ancient walls for views of the small but busy port, across the Strait of Gibraltar and all the way to Africa. Long container ships travelling back and forth in the distance, peacefully criss-crossing the seas from here to there. We saw old cannonballs and Arabic inscriptions, the remains of century-old blue tiles around the windows, Roman foundations in the chapel floor.

A Town With Rough Edges

Through the back exit we left the castle to explore the picturesque Plaza de la Ranita, where broken ceramic frogs spilled water into a star-shaped fountain. There were stairs leading down to the old town, and we descended into the familiar maze of narrow streets and white-washed walls.

Tarifa was by no means a picture-perfect town. There were a lot of rough edges here, empty buildings with rotting balconies and broken windows, crumbling walls and splintering wood. Much more could have been restored but this was authentic. It had a certain appeal. A city with rough edges. From the closed off Isla de las Palomas to the haunted watchtower and now the imperfect walled old town, Tarifa had a refreshingly honest personality with not a care in the world.

And here was the last of the three appeals of Tarifa: Despite its history it was a young city.

There was a vivid surfing culture, attracting those crazy, sporty hippie travellers who liked to stay for a while longer before chasing the next big wave. Bars were selling cheap cocktails that almost smelled of the sea, the salt and the sand of the Atlantic. Little shops offered a mix of creative handicraft and fashion, hand-painted signs glowed in all colours of the rainbow. Outside the town walls, big international brands equipped visitors with gear and surfware.

Roman Ruins by the Sea

We returned to the car for one last stop of the day, the Roman ruins of Baelo Claudia in the village of Bolonia. Probably the best preserved Roman site in Spain, a complete city of baths, a temple, a forum, a market, and a theatre. Through the ultra-modern visitor centre we went, taking the steps to the archaeological site that was beautifully presented and perfectly positioned.

A visit here was like a walk in a park, with the rolling of the waves and the screaming of the seagulls as our soundtrack. The children were amazed at the little details that we discovered along the way, the original pavements, the views into the underfloor heating of the baths, the big salting basins. The open views, the smell of the sea, the framing mountains, they all turned this history lesson into an invigorating experience for the whole family. More often than not we caught the children running down the paths, looking for the next discovery, pointing here and there.

As we traveled back home, we came past Tarifa one last time. The wind had picked up, and there were hundreds of kites in the air. We made one last stop to see these kites, as they were dancing over the beach like musical notes of a symphony on a sheet of music. Their bright colours so happy against the stormy winter sky. The perfect end to a perfect day on the other side of Andalusia.

Andalusia Travel Blog: Plan Your Next Holiday With These Hotel Tips!

Queribus: That haunted feeling of the borderlands