Guadix – such an interesting place yet shamefully unknown to most visitors in Andalusia. We visited the town for a second time after fifteen years, this time with our children. There were many reasons why we wanted to return, but the most prominent one was a unique feature of the town: The cave dwellings.

A great part of Guadix’s inhabitants lived underground in caves dug in the soft tuff rock that was surrounding the city. “Troglodyte” was the term that described this form of living. Traditionally, this was the area where artists and artisans would live, and also the gypsies. Even today, it was still very much alive, a populated part of the town with a church in its centre, a school, bars, and restaurants that offered a more alternative way of living.

In short, the cave dwellings of Guadix were an important part of Andalusia, yet widely unknown as many people tend not to travel on the road between Granada and the deserts of Tabernas.

The old Town: A Cathedral, a Square and a Moorish Fortress

We parked the car near the cathedral, not daring to go any further into the fabric of this ancient town. From experience, we knew it could be rather challenging to navigate old Spanish streets with a car. In front of us, covering a weak winter sun that was sitting low in the sky, rose the tower of the ochre cathedral of Guadix, A beautiful building that took almost 200 years to complete, hence showing a wild mix of styles that ranged from Gothic to Baroque.

We walked all the way around the cathedral and to the front porch, admiring the elaborate facade. Today, the church doors were closed for visitors, but the views of the outside were enough to leave a lasting impression on us.

Right opposite the square in front of the cathedral we found an archway underneath a building. On the other side, the orderly forms of the Renaissance style main city square awaited us. Now in December, it was tastefully decorated with Christmas lights.

Like a Smurf village: The Cave Dwellings of Guadix 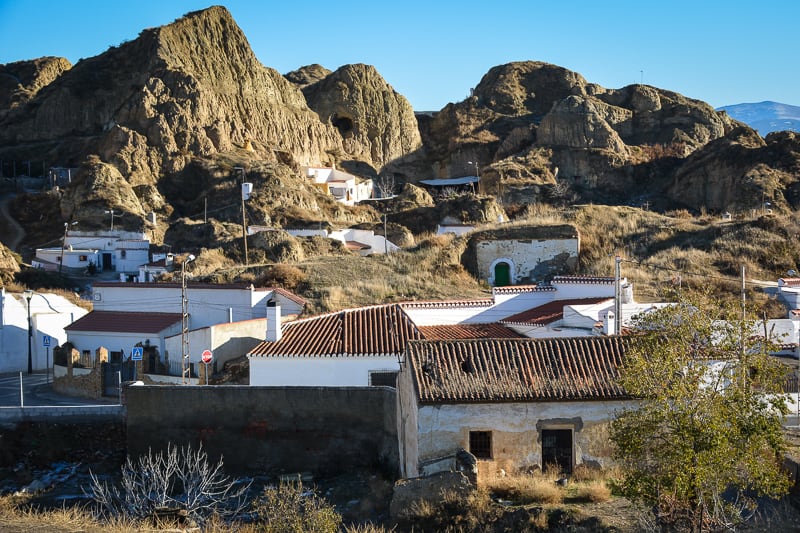 Of course, the children wanted to see the caves straightaway, so we walked from here to the southern quarter that was dominated by these unique dwellings. Walking around the base of the massive Moorish castle, it was easy to find our way to the Barrio Troglodyte, just 20 minutes from the cathedral by foot.

A charming part of town, almost like a Smurf village, quaint and cosy with soft round curves and tiny front yards. The caves were easy to make out: the fronts whitewashed like proper Spanish houses, and on the top a sea of little chimneys. We found a small fenced lookout point, a mirador, which at the same time was the roof of one of the houses. From here we enjoyed 360-degree views of the quarter. From above we looked at the stables with the donkeys, the Moorish castle, and the spectacular mountain ranges in the distance.

Many residents in Guadix liked to show visitors around their cave dwellings. The elderly gentlemen on whose house we had been standing just a minute ago invited us inside and gave us a free tour of his apartment. As he explained in Spanish, on the inside the temperatures were always a steady 20 degrees – a bliss during the hot summer months. No windows, of course, except to the front where we found the modern kitchen. A tour so intimate, we saw a hand drawn greeting card pinned to the fridge, saying, “For the best granddad in the world”.

The Setting of the Winter sun in a Haze of Fires

From Guadix, we took the southerly route towards Granada. As the sun was setting, the light changed to a warm glow of oranges and reds, painting the limestone cliffs in the most vivid colours. Smoke was lingering in the lower lying areas and valleys, the result of many winter fires and smokey chimneys. The particles of the smoke added streaks of pastel to the landscape.

Guadix was not the only place in the area to have cave dwellings, but it was the biggest. However, if you are not keen on visiting the barrio, just watch the landscape carefully from your car window. There were caves everywhere, from modern to rustic, single houses as well as farms.

The mountains on both sides were beautiful in their eroded way. The bizarre forms of pinnacles and lose rocks sitting precariously on top of peaks entertained us and the children for quite some time. In the far distance, the snow capped Sierra Nevada made us scheme our next winter trip to the region.

More Than Just a Side Note

Guadix was well off the tourist trail but made such a rewarding destination for a day trip. The ancient cave dwellings were unique to Andalusia, but for most tourist guides there were inexplicably not much more than a side note if mentioned at all. To us, Guadix was more than just a quick stop, it was something that we needed to return to in order to share the experience with the children.

More photos on the bottom of the post, including an inside view of a cave.

Did you like this post? Leave your mark by clicking or tapping the heart on the top of the article! ↑

You may also Want to Read This

No Time for Vertigo: Caminito del Rey near Malaga

Andalusia – A Comprehensive Travel Guide for First-Timers and Returners

Che Guevara and the Irish Connection in Kilkee