What is a city to you? To me, it’s not the flashy boulevards and the shiny facades, a collection of houses and streets. To me, a city is a living and breathing organism. One that changes everyday as it interacts with the people. That reacts and provokes reaction, is being modulated and modified by humans as they create the space that they need in order to live their lives.

Street Art is very much part of this process, and big cities like Berlin have long realised that providing creative spaces not only brings life to the urban organism, it also turn less attractive spaces into an integral part of the cityscape.

On our recent visit to Berlin, we found a hidden laneway that was covered from top to bottom in urban art, and it was here that we fell in love with this living city all over again. Let me show you, how. 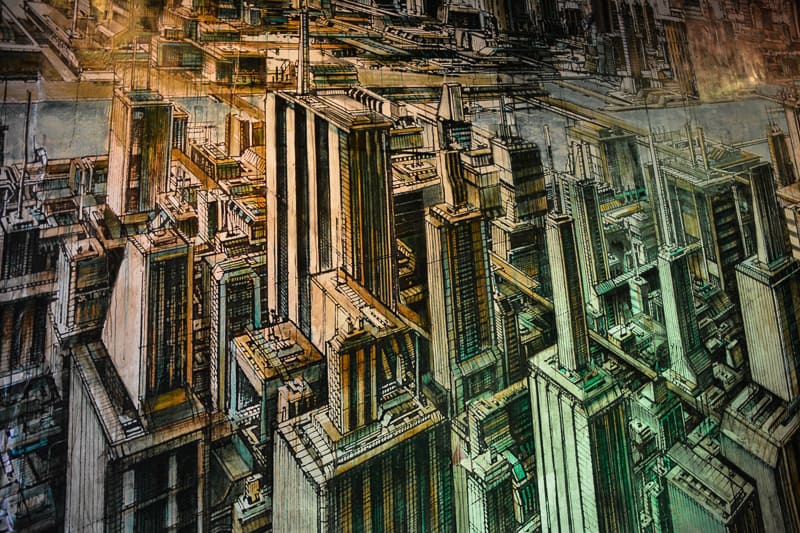 A Story of the Gentrification of Berlin

Over the last 20 years, Berlin has seen massive changes. I remember that when I was a student at Humboldt University in the early 2000’s many of the students would live in the cheaper areas of the city, mainly in Friedrichshain and Prenzlauer Berg. This was due to the fact that many apartments in the east had not been modernised in the GDR. If you lived in the inner eastern suburbs of Berlin in the 90s and the following decade, chances were that you would have to put up with coal heating and shared bathrooms.

But then developers entered the scene, kicked out renters and modernised the one hundred year old buildings, realising that they had rough diamonds at they hands. They knew that renters and buyers would look out for period features such as high ceilings, floorboards and stucco ceilings. They modernised and beautified, and then they returned these rentals back to the market where they fetched much better prices.

By and by, the inner eastern suburbs of Berlin were gentrified, the grubby house fronts and neglected courtyards disappeared and were replaced by luxury apartments for young professional families. 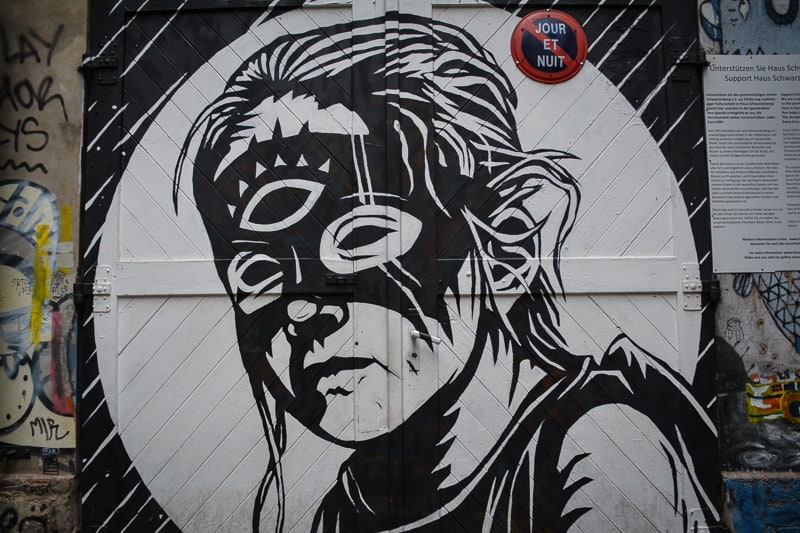 How Hackesche Höfe Lost Their Character

It’s the way of the world, I guess. A game of supply and demand. But at the same time, a city who loses these parts of the cityscape run the risk of losing character. Just look at Hackesche Höfe, a prime example for this change. Many Berlin apartment blocks looked like Hackesche Höfe during the turn of the century, but they were not a desirable place to live in. The apartments were cramped and dark, the activity by businesses in the courtyards dirty, dangerous and loud. Yet, look at the modernised courtyards now and you will know nothing of this.

I was slightly disappointed when we visited Hackesche Höfe and found little that would remind us of this difficult past. The former workshops now housed small boutiques, art galleries and speciality shops. The courtyards were swept clean, they looked deserted. Somebody had tied Christmas balls to the naked trees, bikes were chained to the railings of cellar stairs, abandoned. It was the perfect picture of orderliness and cleanliness. Typically Germany. Maddeningly boring. 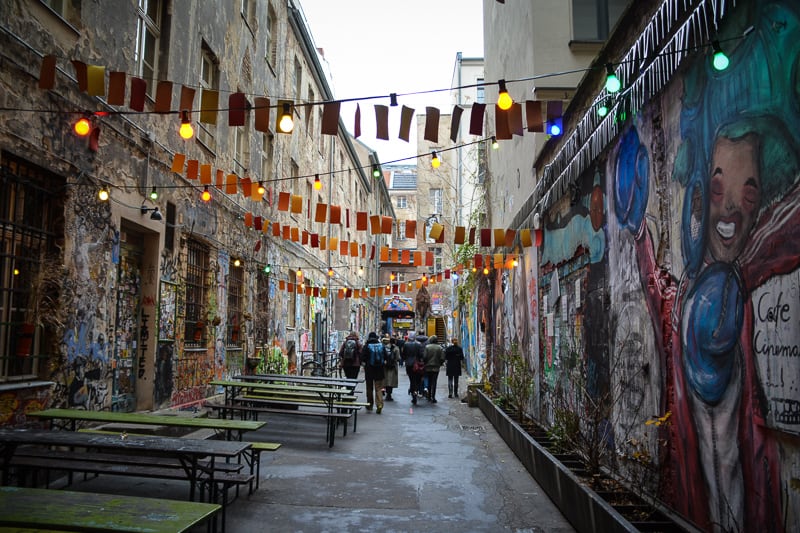 But then we stumbled on a laneway off Rosenthaler Strasse… It was covered in stickers and posters, hints of graffiti on the walls. Curiously, we stepped closer, entered the courtyard, not much more than a laneway and we were immediately surrounded by street art. An explosion of creativity, a cheerful display of colour. Murals and stencils, stickers and graffitis, sculptures and collages. Fascinated we studied the walls, downpipes, doors, the kids pointing here and there. So much to see, so much to take in!

Lined up in this little laneway were benches and tables. In summer, this must be the best place to have a drink. Creative spaces like this would lure creative people such as performers and musicians. Colour would bring out a cheerful atmosphere, would help forge friendships with strangers.

No other place in Berlin, we found, would greet us with a more vivid, more organic atmosphere than this little laneway. 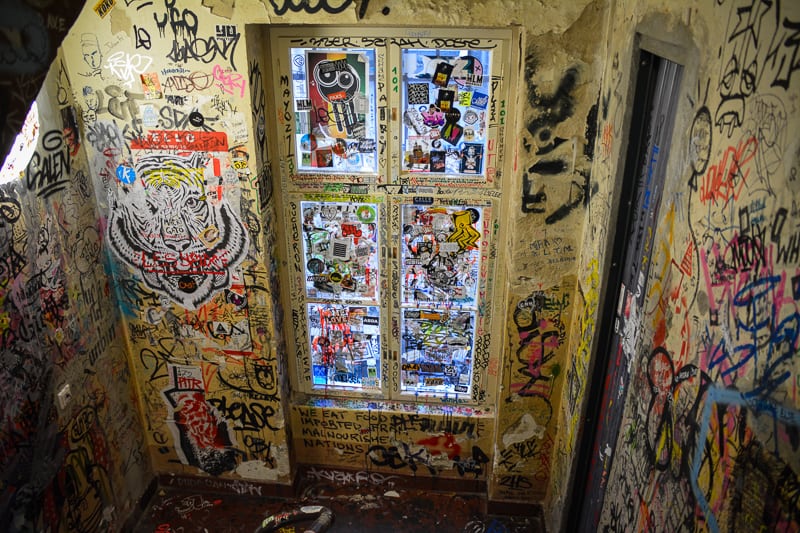 Haus Schwarzenberg, Where the Organism Comes to Life

In the end, we found our most favourite place in Berlin. A staircase in one of the houses, Haus Schwarzenberg, covered in stickers and scribbles from top to bottom. An unconventional entry to an art gallery, a boutique, creative agencies. Fascinated, we explored every little corner, took photos, felt our hearts dance a little dance of joy. Walked into a book store which wrapped around a couryard and turned into a gallery of contemporary art.

This is how I remember Berlin. It’s a city of creativity and colour, of make-do and surprise. It challenges you to take a turn into an unassuming laneway, walk new und uncharted paths.

Forget the shiny modernised houses in Friedrichshain and Prenzlauer Berg. Spend no more than five minutes at Hackesche Höfe. Go here instead, to this hidden street art laneway. Get to know this living and breathing organism that is Berlin, listen to its story, become its friend. 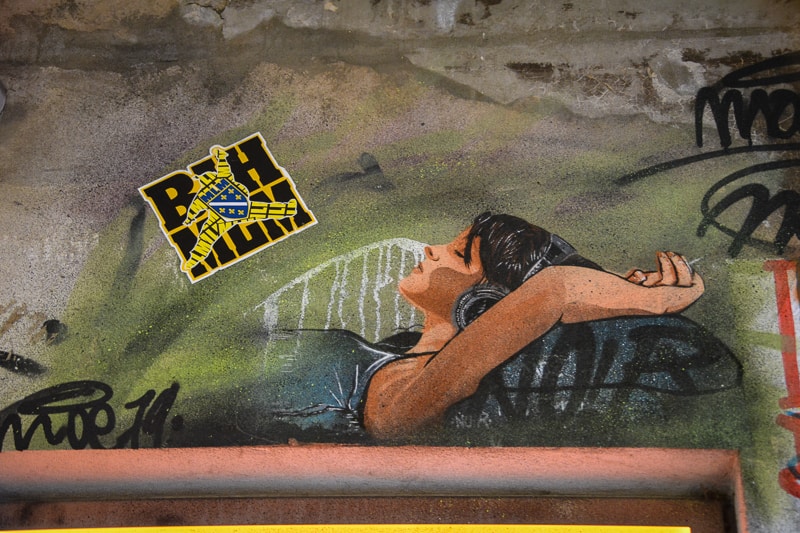 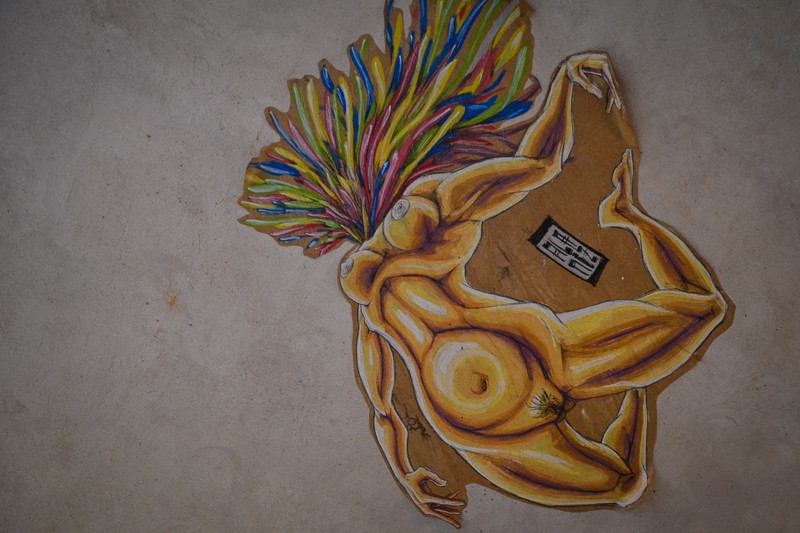 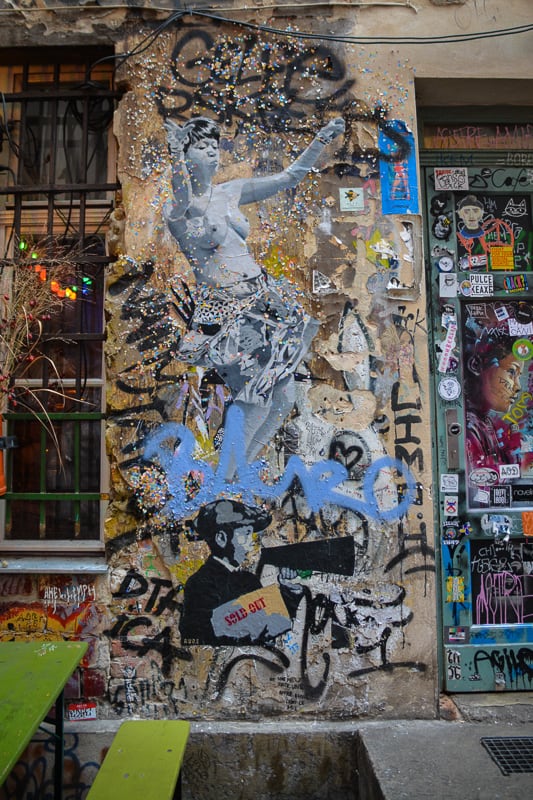 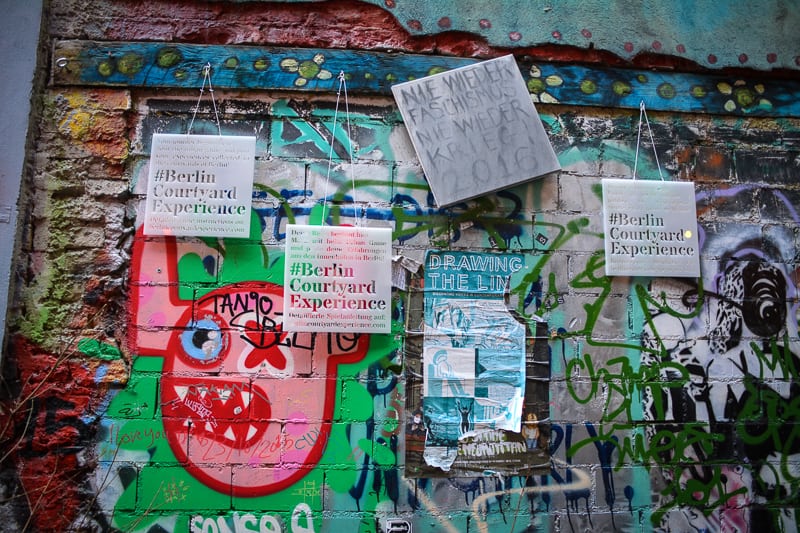 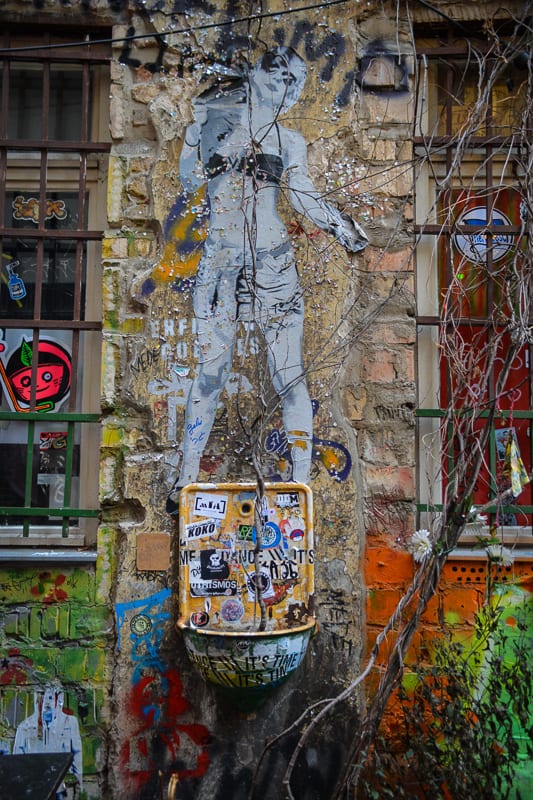 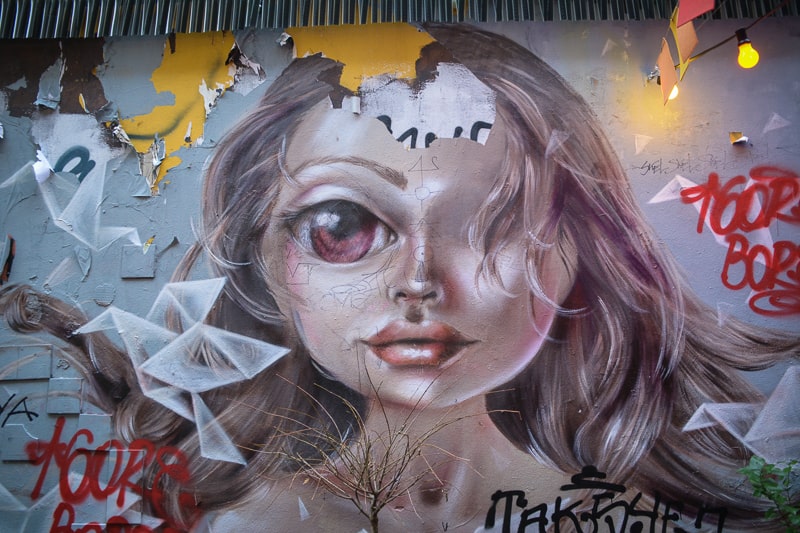 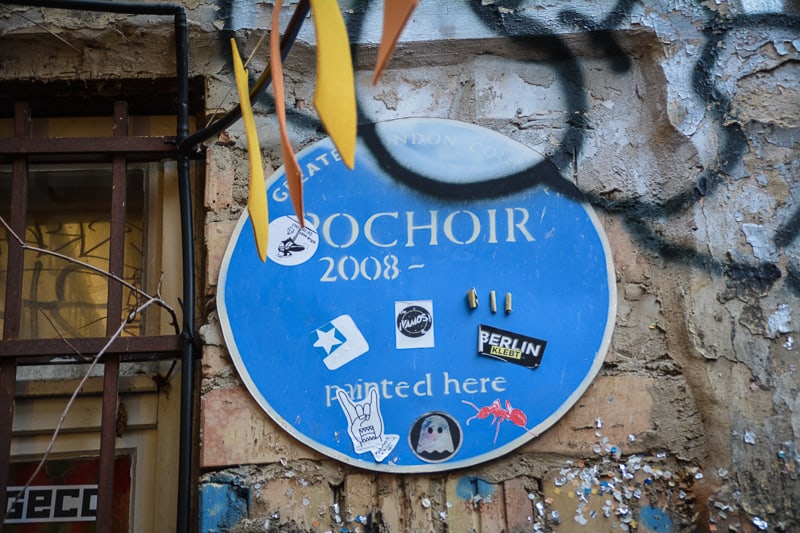 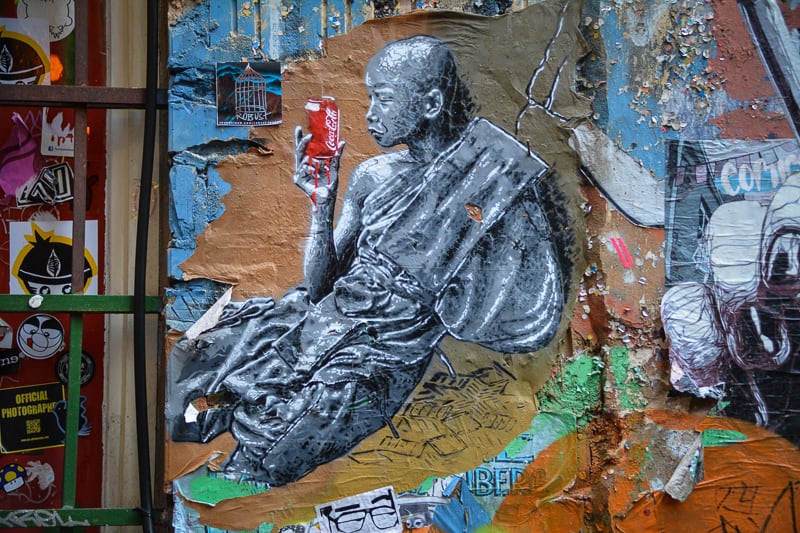 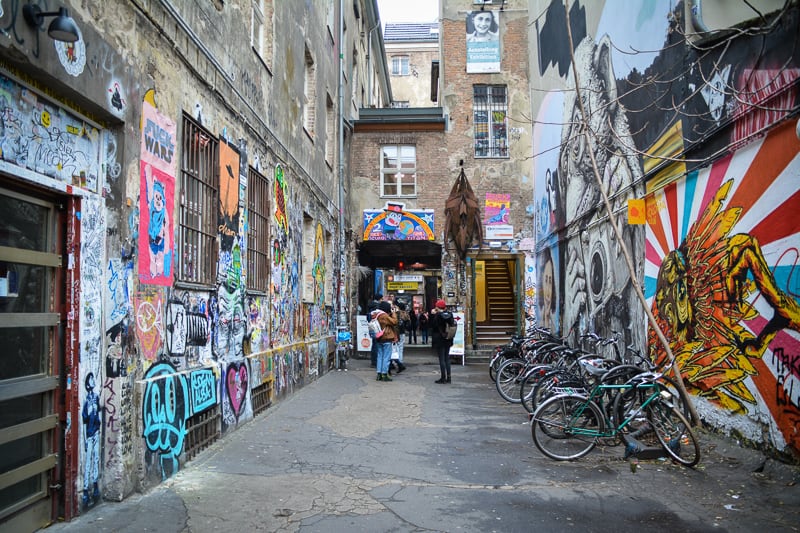 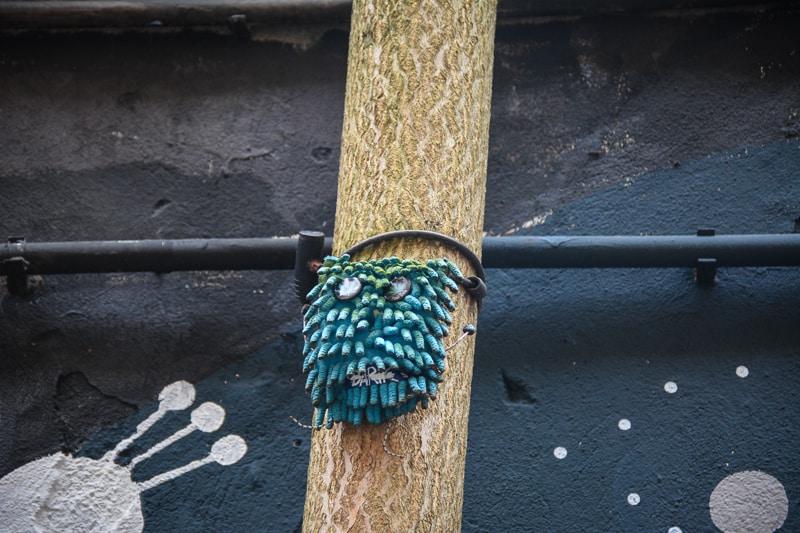 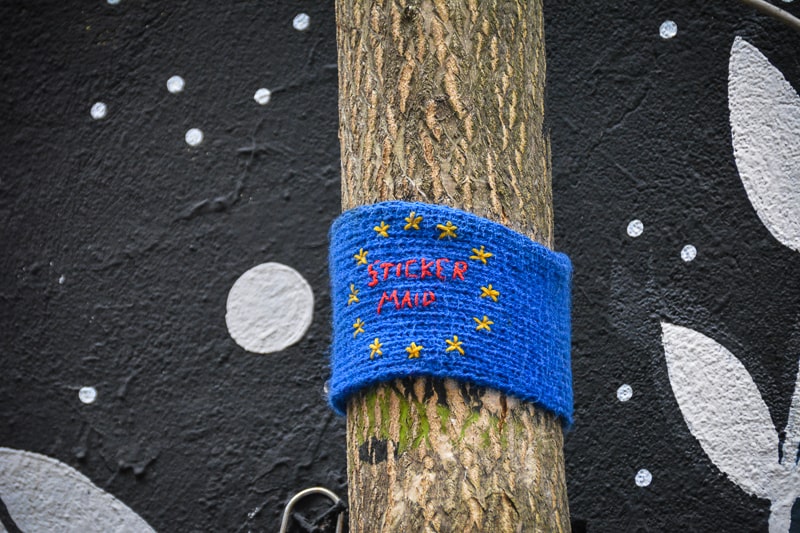 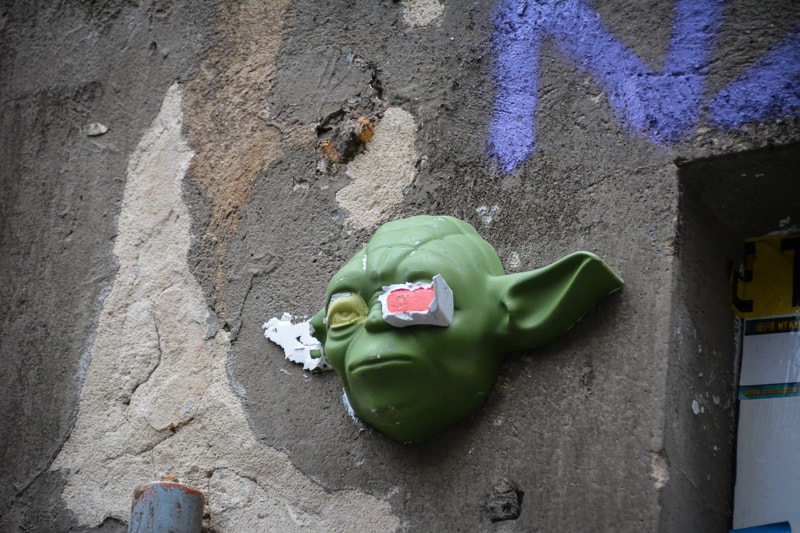 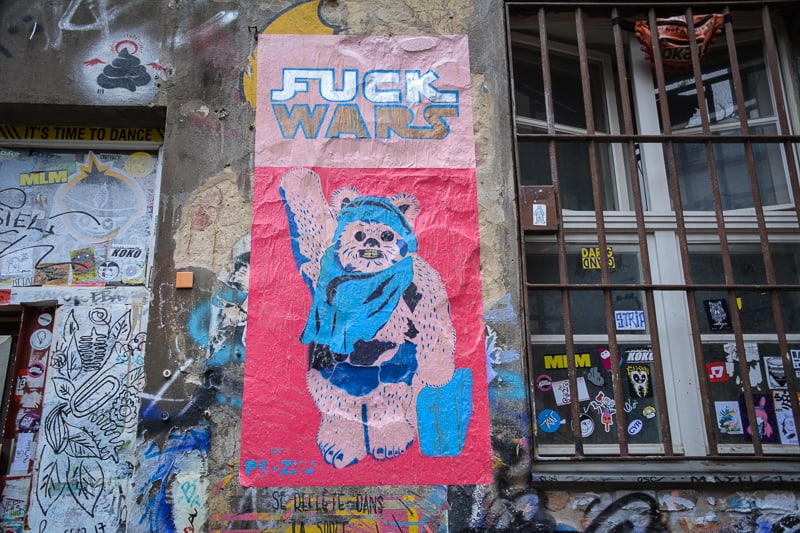 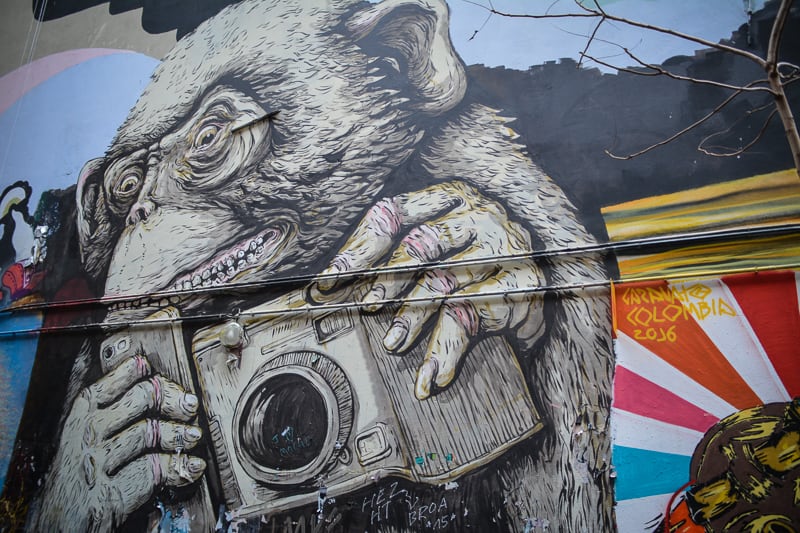 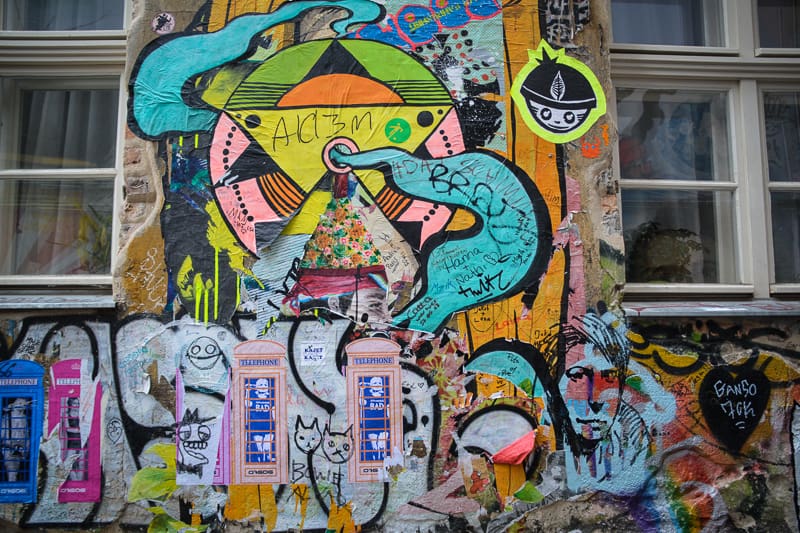 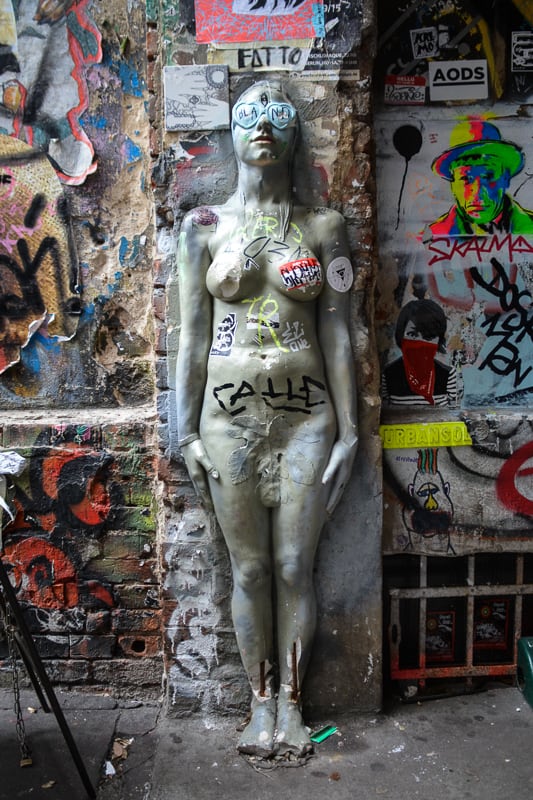 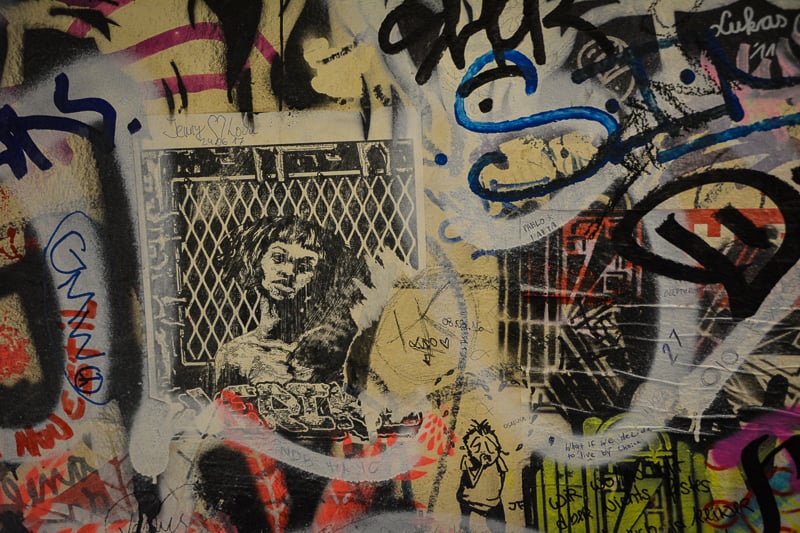 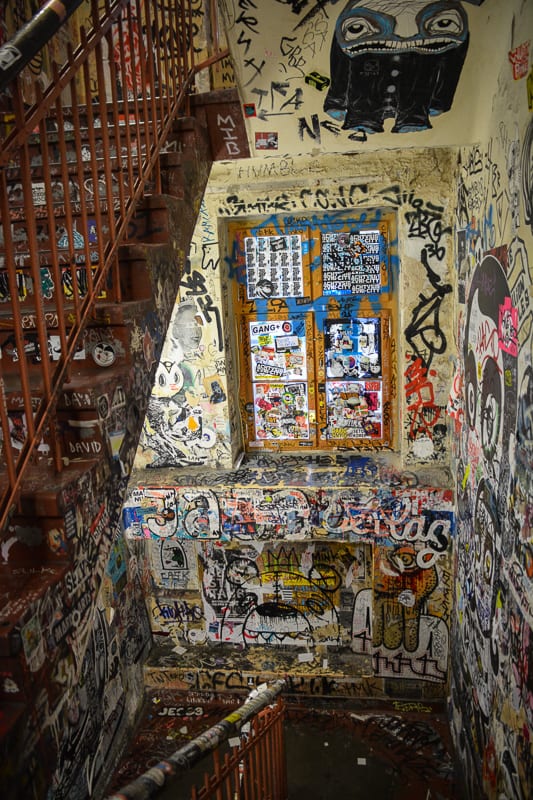 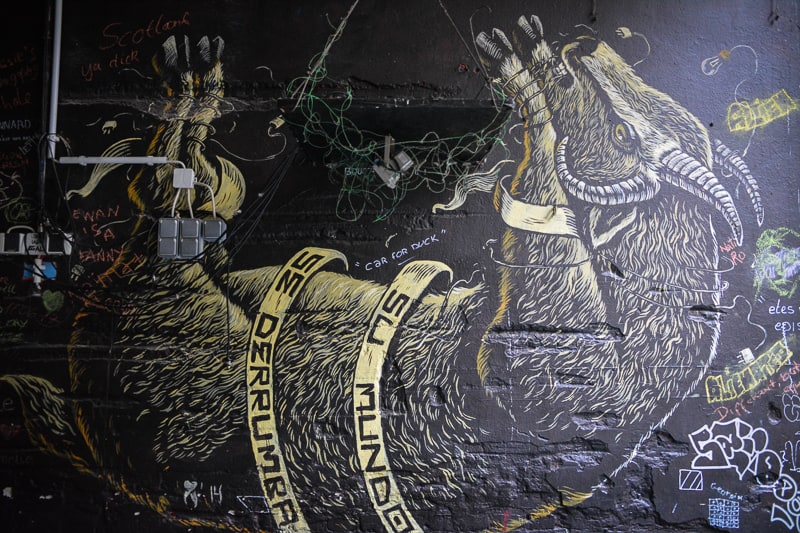