Seville Cathedral: A church of superlatives

Seville Cathedral is not your ordinary church.

It is in fact a church of superlatives. A multiple record holder, a master of the game, a cathedral so extraordinary that your visit will be unforgettable. No wonder, you might say, considering that the builders planned to build a temple that would be so grand in every aspect that future generations must think them mad.

I wouldn’t say that madness is the right word for the cathedral. It is grand in style indeed. But insanity plays no role here.

All of this means that even though you may not be inclined to visit churches when on holidays in Spain you really have no excuse not to visit this marvellous building. 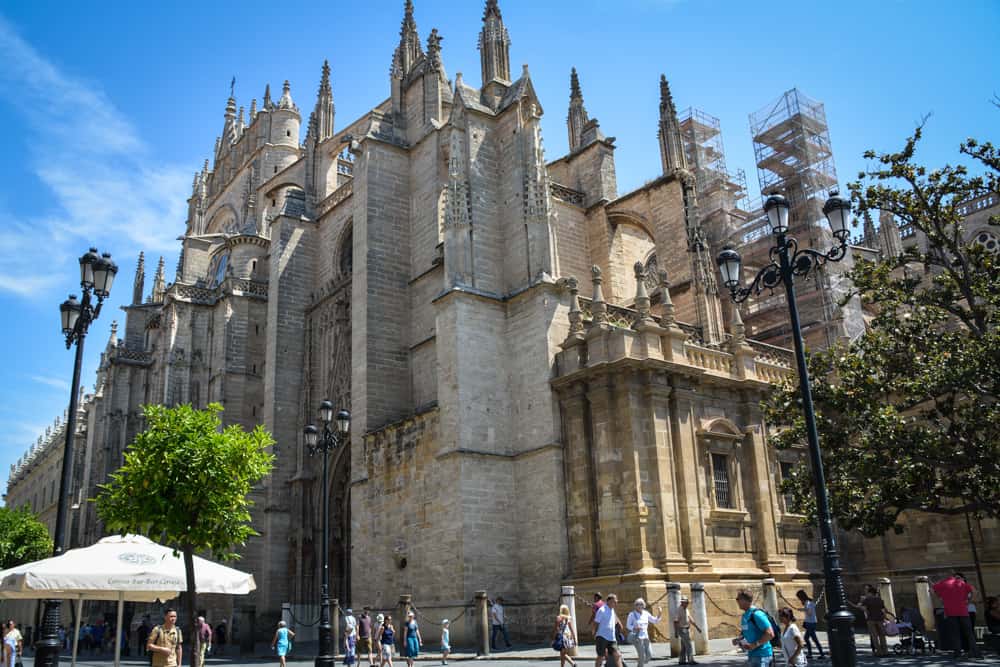 So it is not without reason that Seville Cathedral enjoys its status as a UNESCO world heritage site. This alone should win you over when you are contemplating whether you should spend a couple of euros to go inside these holy halls.

You may have seen many big churches already in your life. You might have even been to St. Peter’s in Rome (which is, by the way, not a cathedral, hence the one in Seville is considered the biggest cathedral in the world, and not St Peter’s). Yet, the grand scale on the inside doesn’t fail to impress even seasoned visitors.

The nave of this cathedral is the longest in the world. If it wasn’t for the box-like choir sections that break up the long central part of the building, you would be stunned even more. Standing under the pipe organs, tilting your head back to see the very top of the instrument, you cannot help but feel very small indeed.

Yet, it is the golden altar piece, elaborately finished in great detail and plated with gold leaf all the way to the very top, that steals the show for every other part of the cathedral. It took a Flemish master 44 years to complete this piece – the work of a lifetime.

Along the sides, there are 80 chapels to explore, including the marvellous royal chapel. There is so much to see here, you feel intimidated by the experience. The devotion and dedication of generations of builders, artists and believers all come together in this over-dimensional church.

A church built on Moorish foundations

As Seville used to be under Moorish control for many centuries it used to be home to a central mezquita, just like the one in Cordoba. However, in contrast to what would later happen in Cordoba, the citizens of Seville decided to demolish the converted mosque and build a custom-made cathedral in its stead.

Only two parts of the former mosque survived this eradication: The Patio de los Naranjos which used to be the square where the Muslim faithful would wash in preparation for prayer. And the Giralda which is now the bell tower of the cathedral but which used to be the minaret of the mosque.

There are no stairs in the Giralda

The Giralda is one of the oldest parts of this building. The top part was added later during the Renaissance to provide adequate space for the bells. The building material is even older than that, because most stones had been sourced from a Roman wall nearby.

A visit to the Giralda is a must for any cathedral visitor, and it is included in the entry fees anyway. We were surprised to find that instead of stairs we made our ascend on a ramp. The idea behind this was to provide access to the top of the tower for a man on a horse. For us however, it meant that it was much easier to climb the 35 segments to the very top.

The views from the Giralda are of course just fabulous and a fantastic way to see the city of Seville in a different light. Even if you don’t care for history or churches or the significance of the building, the views should be reward enough for your patience.

The name Giralda, by the way comes from the little figurine on top of the tower which you can see easily from the Patio de los Naranjos. The Giraldillo is a wind vane, a symbol of the triumph of the Christian faith, and at the same time a symbol of the city of Seville.

Where Christopher Columbus is buried

There is a bit of a dispute whether Christopher Columbus really rests in Seville or maybe in the New World. People in Santo Domingo, Dominican Republic, claim that they house the true remains of the great seafarer, however nobody seems willing to accommodate the wish of scientists to release the remains for further testing.

Testing was done however to what has been put to rest in Seville Cathedral. As it turned out, the likelihood that it is indeed Christopher Columbus’ remains which are shown to the public is extremely high.

Be it as it may, the elaborate burial group that has been placed inside the cathedral with the remains is well worth a closer look. It shows the four kings representing the Spanish regions Aragón, Castille, León and Navarra who carry the explorer’s sarcophago.

With a last look of the ensemble we leave Seville Cathedral, deeply impressed by the scale of the building and the grand dimensions of pretty much everything inside.

I once read that medieval churches used to be much more then just a place for prayer and contemplation. They were a very wordly place indeed.

They used to be a place for meetings and where business was conducted. Dogs would be chasing hens around, and children would play hide-and-seek behind the columns. It was a place of social get-togethers and – if you were wealthy enough – a site to show off your prosperity in one of the chapels.

In a cathedral the size of this one, it is not hard to imagine that all of this took place here.

In the end, we couldn’t find a sign of madness in the design of the cathedral. Instead, we found taste and style, vision, dreams and deep devotion.

How to visit Seville Cathedral

Seville Cathedral is open on Mondays from 11am-3.30pm and Tuesdays to Saturdays from 11am to 5pm. On Sundays the opening times are from 2.30pm to 6pm. Check the official website before you visit, in particular if you plan your visit on a public holiday. Entree fee for adults is 9 €, reduced fees 4€ (students under 26 and pensioners).

A pearl in the ornament of the world: The Mezquita in Cordoba

A second giradillo, welcoming visitors at the entrance. 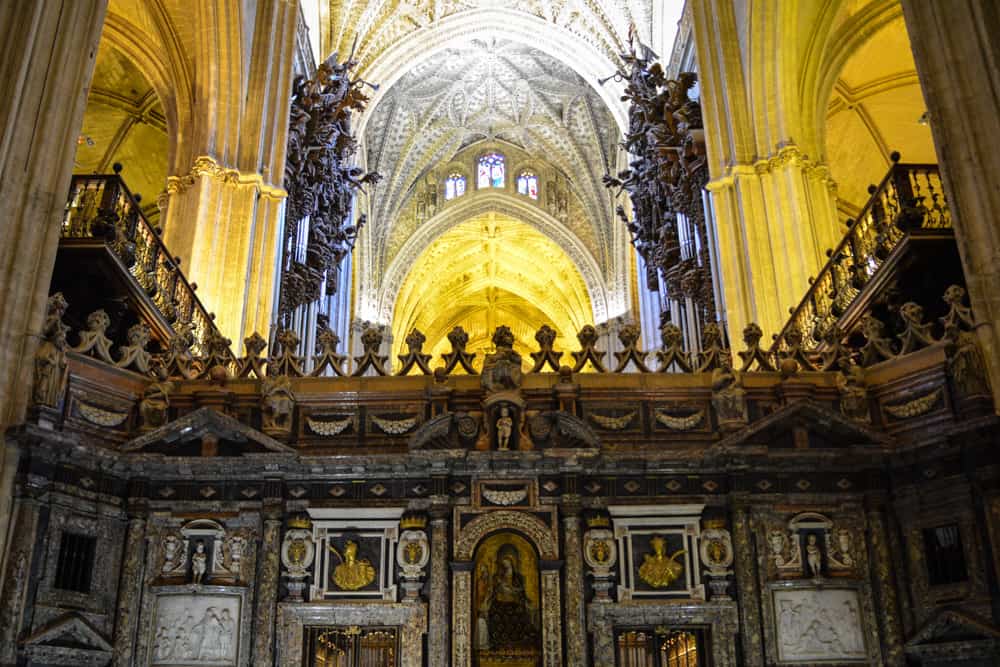 The grand scale of the church is hard to fathom.

Both, Christopher Columbus and his son Diego, are buried at Seville Cathedral.

The nave is interrupted by central cubic sections. 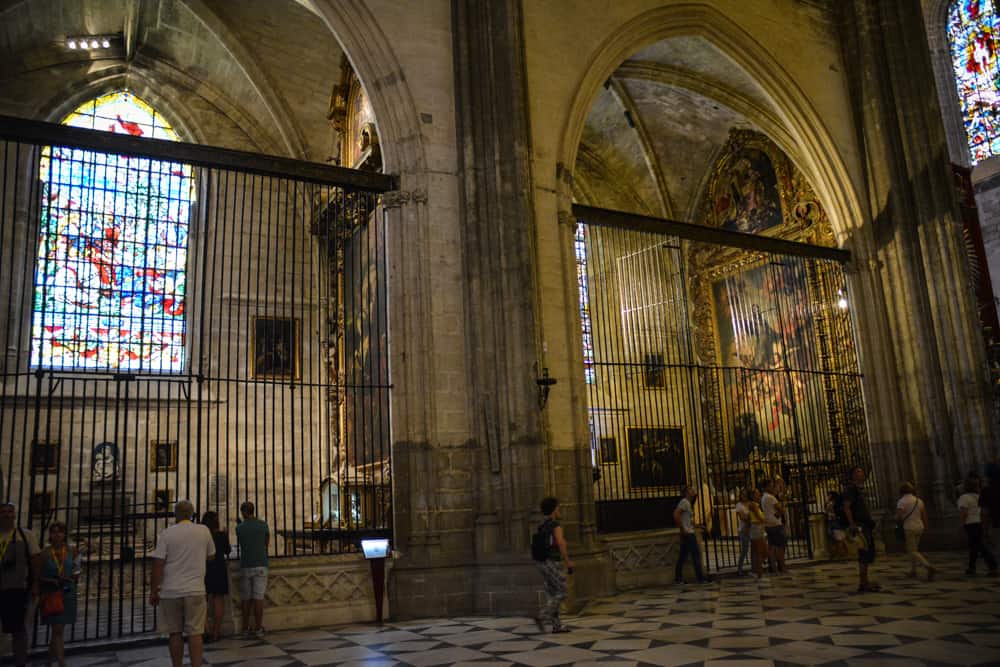 There are 80 beautiful side chapels in the cathedral.

The scale becomes more obvious when compared to the size of visitors.

The giant golden altar piece is a wonderful piece of art.

Detail of the cathedral. 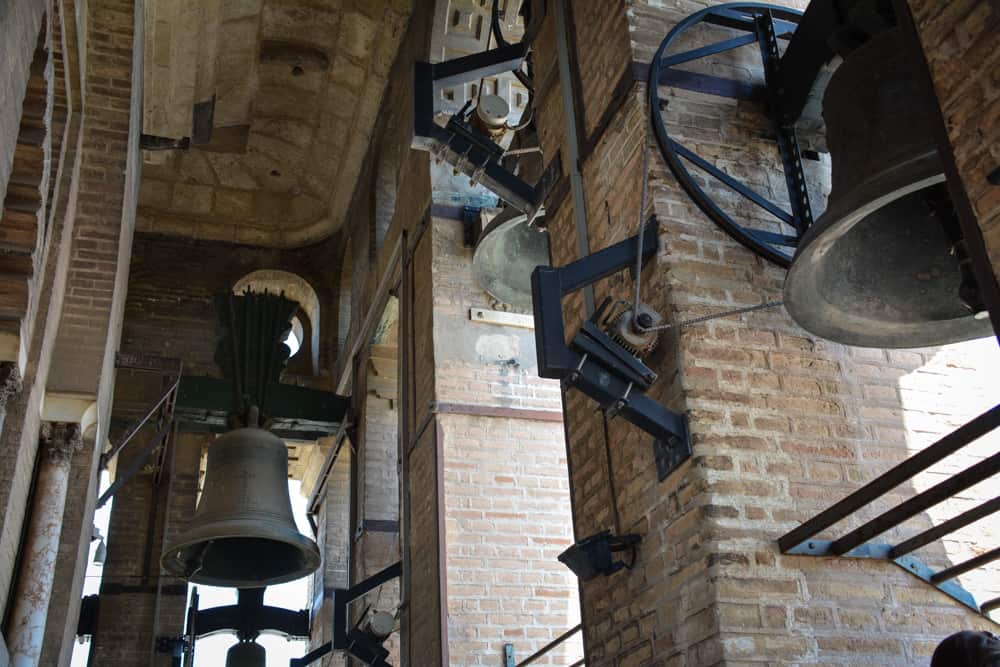 Bells in the bell tower.

Detail of the bell tower.

Views from the Giralda.

The cathedral as seen from the top.

Views all the way to the Guadalquivir.

Detail of the cathedral.