The white houses of Setenil de las Bodegas in Cádiz province glare under the hot Spanish sun, hurting our eyes. We are standing on the highest peak of the village, where the Moors have built their castle overlooking the Río Trejo.

On first sight, it looks like many other Andalusian villages – a sea of white houses, stretching from the castle all the way into the valley. Pretty, rustic, sunny. Potted flowers along the walls, colourful ceramics embellishing the eaves, the satisfyingly warm glow of terracotta roof tiles. Yet, there is something very different to this town.

What you cannot see on first glance is that Setenil de las Bodegas is a village of cave dwellings. Unlike what you would find in the area north of Granada, however, the cave houses have not been entirely dug out of the rock. Rather, they make use of the natural shape of the landscape by using the overhanging rock vaults along the river bed of the Río Guadalporcún.

It’s an unique setup which you won’t find anywhere else. Yet, Setenil lives woefully in the shadow of a much better known town nearby, Ronda. While people from all over the world flock to Ronda to walk across the New Bridge, most of them have no idea that there is this very intriguing village nearby.

We have skipped Ronda and have come to visit Setenil instead. A village of light and shade, as it is full of contrasting impressions from the lofty height of the mountains to the deep gorges and valleys below.

A Steep Climb in the Sun 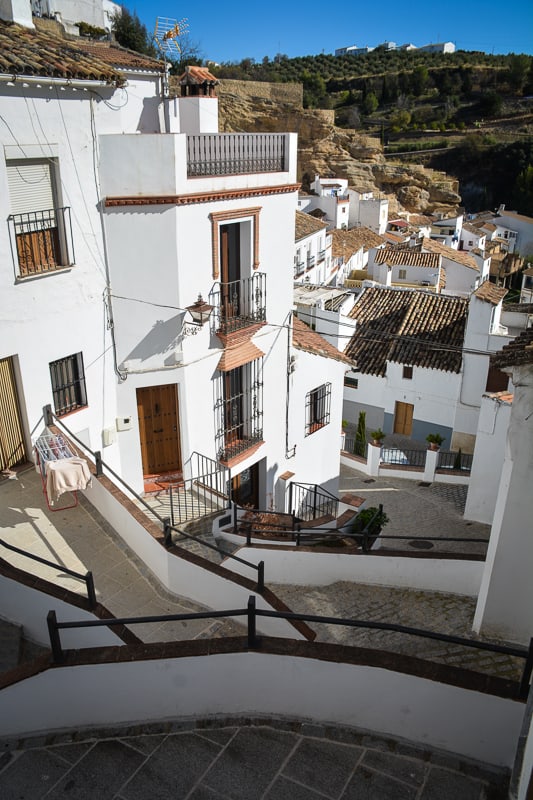 We follow the road signs for public parking and leave the car in a safe spot overlooking the city. From here it’s just a couple of steps down to the river and up again along steep village roads. We walk past the silent fronts of houses, shutters drawn, doors closed. Rarely do we happen upon a person, let alone a car. The roads are getting steeper by the minute, typical for many towns in Andalusia. There are stairs we need to climb, narrow hairpin curves we have to follow. With each step we feel the strain more and more. The tiny roads echo our laboured breath.

This is not just a walk in a village. This is proper bone-breaking work. By now we are panting. But it’s not all for nothing. There is of course a reward. From the highest point of Setenil de las Bodegas we can now see the spread of white houses. We can make out clearly how they huddle against the ledges of the steep mountains around us. In elegant curves, they follow the bed of the river, like brushstrokes from a bold artist.

Besides us, there is also a Spanish school class visiting the village. The teenagers are using the exceptional freedom of the field trip to flirt and laugh and be silly. They play out their friendships on the terraces overlooking the village, noisily and with lots of laughter.

The mountainous scenery carries their voices far across the village, the valleys amplifying their joyous shenanigans from here until the end of the roads. Being up here with the views of Setenil and the olive groves and the dusty hills under the Spanish sun, we feel light and free.

The Shady Depths of the Gorge

From our sunny spot near the castle we find our way down to the deepest point of Setenil de las Bodegas. We walk past village houses that seem to melt into the mountain, it’s an intriguing sight.

And then, along the banks for the river Río Guadalporcún, we reach the famous cave dwellings of the village. Nobody knows how long people have been living in caves in this area but from the blackened rock ceilings and the general understanding of prehistoric occupation in Spain, one can only assume that it must have been for thousands of years.

The houses in Setenil de las Bodegas, Cádiz have a proper building front, which is what makes them so curious to look at. They have doors and windows, even upper stories with balconies, hints of ceramic roof tiles. Unlike other cave dwellings, these are closed-off spaces under rock ledges, with the rock itself forming the ceiling of the houses. Behind the fronts, many houses have been extended by digging further into the rock. 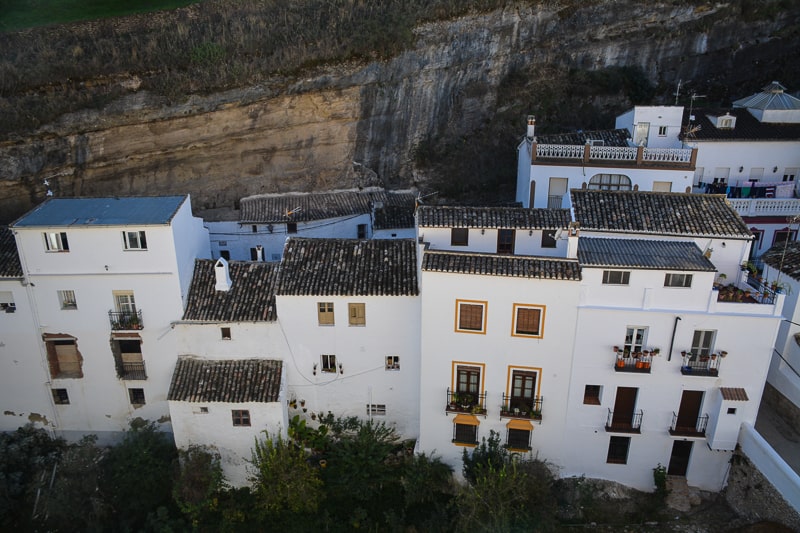 Along the river, people differentiate between the sunny side and the shady side. The gorge is so deep that only one side gets its proper share of direct light. It’s warmer in summer, but it makes no difference to the inside temperature of the caves. We walk across a small footbridge and find a seat in one of the many restaurants and bars that are right here by the river, on the sunny side.

Wine and Tapas in Unique Surroundings in Cádiz Province

It’s not quite clear what the name Setenil de las Bodegas means. The second part of the name, de las Bodegas, probably refers to the wineries that used to flourish in the area. The first part of the name, however, might have Latin roots. It may refer to the strong castle on the top of the village, which took seven attempts to conquer. Another possible explanation is that Setenil refers to underground storage facilities that hold wine. We find this last one more plausible.

Be it as it may, we order glasses of wine and some tapas and enjoy the quiet mid-week calm with views of the lower parts of the village. Vines are flowing down the rock above our head, like a natural curtain. Sitting under the enormous rock ledge we feel snug and secure, as if the sheltered position stirs something very primeval in us, the desire to make use of the shielded surroundings.

Setenil de las Bodegas is a worthwhile day trip destination in Andalusia. It can easily be combined if you are headed to Ronda anyway. Still quite off the beaten path but so unusual that the memories of a visit to the town with its stark contrasts of light and shade will stay with you forever.

More photos on the bottom of the post, enjoy!

Andalusia – Everything you Need to Know to Experience Spain’s South