My visit to Italica taught me to never ever underestimate a destination. I challenge you to visit a place first before you pass judgment. Why? Because in Italica, I almost made the mistake of dismissing the Roman sites – there are so many around the Mediterranean, you lose interest at some stage – but then I was indeed caught by surprise.

What I found was a magnificent Roman theatre that was glowing under the smoky skies of an early summer morning. The scene was set in an atmosphere of smoke and ashes that was befitting for the new life that the theatre had recently been given thanks to TV show Game of Thrones.

What more, I enjoyed the site without the crowds and on a day that couldn’t have been more perfect even if it tried.

A Day of Smoke and Fire

The little town of Santiponce was just 9km from the centre of Seville. What made it special was the Roman ruins on which the town was built – a place called Italica. Not much was left of the ancient city, hence my reserved excitement of visiting Italica in the early morning hours.

When we woke up the following morning in the hotel opposite the excavation site I was still clueless as to the grandeur and beauty that I was encounter later on. But what struck me was that there was smoke in the air. It was summer in the south of Spain, and it was the season of wildfires.

The smoke changed the early morning light to a weak orange glow, adding an aroma of burned wood. The taste of roasted pine needles lingered in the air, spicy and aromatic. The smoke had come quickly and soundless – an interesting contrast to the fresh, cool morning air that had been there just a minute ago.

The Rise and Fall of Italica

Italica was of course not just any place in the Roman empire. The city used to be a thriving trading community that was benefitting from easy access to the Guadalquivir River. Two emperors were born here, Trajan and Hadrian, which shows how powerful the elite in this city had been at the time.

Unfortunately, after years of prosperity, the banks of the river shifted and Italica lost power, wealth, and influence. Soon it went into decline, making way to the rise of nearby Seville which still had a strong river port. Over the centuries, the city deteriorated to the point that it was nothing more than a convenient quarry for the people of Santiponce.

Today, only two big structures remained, the Amphitheatre and the Small Baths. The rest was mostly a mix of foundations, fragments, and well-preserved floor mosaics.

The Dragon Pit in Santiponce

It struck me the second we walked into the Amphitheatre of Italica: This was not just an amphitheatre but also the backdrop of a scene I had watched only a couple of days earlier on TV. This was also the Dragon Pit in Game of Thrones. The site where the powerful parties of Westeros would come together to meet their mutual enemy, the White Walkers.

I was elated, so much so that I performed a little happy dance in the centre of the arena. But what impressed me just the same was the size of the theatre and it’s rather well-preserved condition. The amphitheatre of Italica was the third-largest theatre in the Roman Empire, offering space to some 25,000 spectators. Considering that Italica only had a population of 8,000 people this really was quite remarkable.

Under the filtered light of the hazy sun the oval arena, the patched-up upper ranks, the arched walkways under the stands revealed an unexpected aesthetics that was a joy to explore.

As it turned out, Italica was more than just another Roman site. There was history here, of course. But there was also a particular atmosphere of grandeur and class which was reflected in the few remains that had survived troubled times.

This was when I learned never to dismiss a location just by its name. Always give it a go, see it for yourself. Only then you can say that a visit was not worth the trouble. How true that is for travelling, but also for so many other things in life.

You May Also Want to Check This Out 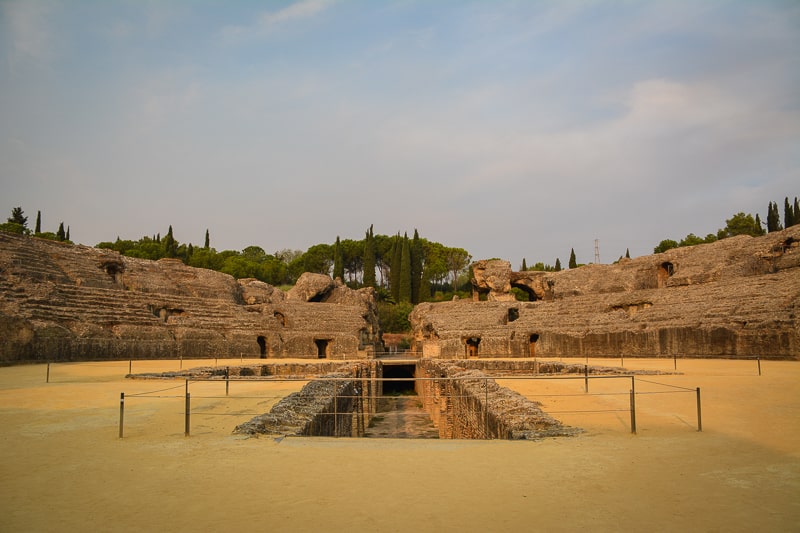 Offbeat places in and around Milan