The Roman Forum: The lost city centre of Rome

Does it happen to you sometimes that you lose something in your own home? Maybe your keys, or the remote control? Your favourite earrings? You walk around the house trying to find it, being late for some outing, and with the growing frustration you start blaming everyone around you?

And then the item will magically reappear. Maybe not at the time when you were looking for it, but it will turn up eventually. Happens to me all the time. I am sure you can relate.

My point is that when you lose something that is dear to you, then you will at some stage realise that you actually lost it. I mean, you don’t lose it and then you forget about it at the same time. At least that wouldn’t happen to me. I like to keep all my precious things in order, and I do have a mental stocktaking process in place to remember all the things that I love and that I need.

It does seem pretty simple, but then maybe it’s not. After all, the Romans did manage to lose and forget about an entire city centre, the Roman Forum.

I think it’s one thing if you misplace your favourite pen, but to lose an entire city centre, complete with temples, squares and shopping streets? The place where political debate was alive, where criminals were brought to trial, where the emperors led their triumphal processions? A cluster of buildings, not just a giant square but also the Royal Residence, the Senate and the complex of the Vestal Virgins?

That seems pretty unlikely, yet the Romans, for some reason, managed to do that. 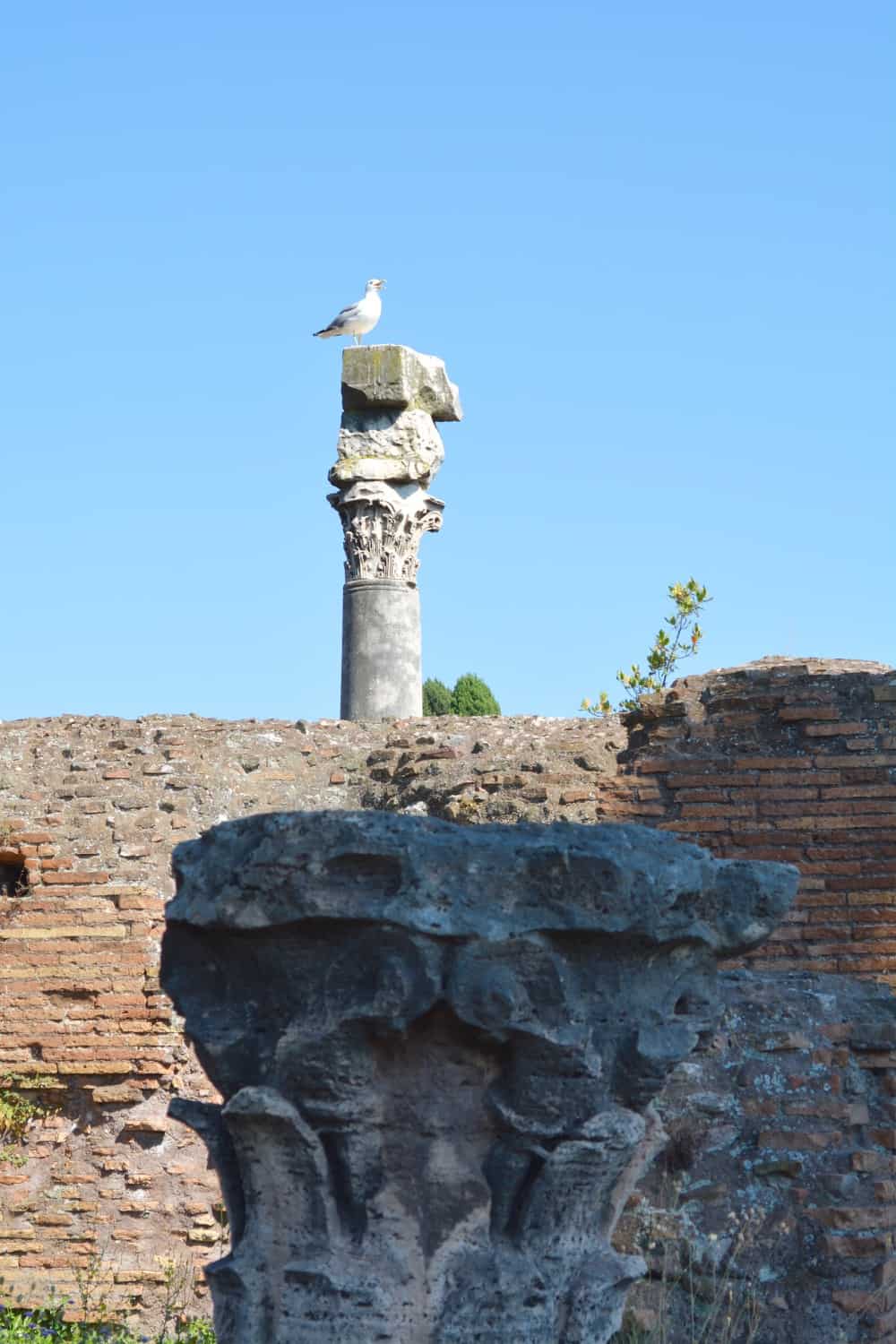 I wonder how it happened. I would assume that after the fall of the Roman Empire and the conquest by Germanic tribes, the citizens of Rome no longer had the resources and willpower to maintain their city in the way that their ancestors did. I can totally understand abandonment.

I can also understand if nature takes over and grass starts to grow over the buildings and streets. I understand if no-one cared strongly enough to clear the area of weeds. We humans can be a lazy bunch.

But what I don’t understand is how the Romans could entirely forget about the grandeur of the Roman Forum? By the Middle Ages the entire area, the former navel of the known world, pulsating heartbeat of an empire that stretched from Scotland to the Middle East, was overgrown and much better known as “cattle field”. Where there were once temples with mighty portals and tall columns, perfectly straight streets and a variety of businesses and public buildings, the Romans would now take their cows for grazing.

Oh, there were ruins there alright. Medieval travellers drew sketches of the stones and columns, apparently showing far more interest in the Roman Forum than the people whose heritage this was.

Luckily, with the emergence of the Renaissance and the renewed interest in antique history, tentative excavation did begin, but the Roman Forum as we know it has only been fully uncovered since the early 20th century. I find this quite remarkable.

Even more so now that I was able to visit this amazing sight in person. The Roman Forum is covering a huge area, which makes it so hard to believe that the Romans managed to forget about it.

It is more than just the forum which is surrounded by various political and religious buildings such as the Via Sacra, the Basilica Constantin and the Rostra. You can also visit the buildings that used to occupy the Palatine, such as the fabulous Domus Augustiana which incorporates a whole stadion.

The Roman Forum used to be a city centre, not just a single museum or a building. An area so big you need hours to explore. Not only that: remember that Rome was not built in a day, and that the buildings are coming from different periods, all vying for space in this formerly densely populated city centre.

We did not come with a plan when visiting the Forum, but I’d like to share with you the eight absolute highlights of our visit. Take it as a starting point for your own planning, or as an inspiration to just browse the site as we did.

Lastly, if you have visited the site yourself, it would be interesting to know what your favourite parts of the Roman Forum were. Let me know in the comments!

My top 8 sights to see in the Roman Forum

Imagine a giant church building made of bricks, or maybe an early industrial hall as you would see it in the likes of Manchester and Liverpool. Cut in half lengthways. That’s the Basilica of Maxentius. Standing on the Via Sacra you look right inside the basilica with its three concrete barrel vaults. Completed in 312, it was the biggest building of its time.

The Convent of Bonaventura

This is a living convent church which you can visit if you like. It’s not really part of the Roman Forum complex but I list it here as you can see it beautifully when you have ventured out to the Palatine. Look at that picture – isn’t it almost like what you would expect from Tuscany? The somber front with the small windows, the terracotta roof and the conifers all come together in perfect sun bleached harmony.

That grotto that you can find to the foot of the Palatine is not a classic part of the site but no less fascinating. Built sometime in the 16th century by a wealthy Roman family, is it a fine example of landscaping efforts in stately Roman gardens. There is a fair amount of salt build-up in the fountain which covers original paintings. There is hope that these paintings can one day be uncovered and restored. Overall, the site is quite endangered though due to the elements and tree roots.

A fascinating name, the navel of the city. There is not much to see here, just a pile of brick stones and a marble plaque (which I why I cannot share a photo of the site, I didn’t find it remarkable enough at the time to bother), however in Roman times this spot used to mark the symbolic centre of the city and the measure point for distances to all places within the empire. It’s a wonderful metaphor for the strict organisation of this ancient civilisation and their engineering abilities. Simply fascinating.

The Temple of Romulus

It doesn’t happen very often that you get to see a church from the inside which is around 1,700 years old. Well, you may come across a number of buildings in Europe that have that claim to fame, but the Temple of Romulus was Christianised as early as 527, making it one of the oldest Christian churches in the world. You can feel its age when you are inside, as the church is in quite bad shape, and the unusual round floorpan is also giving away its ancient origins. However, the painted cupola is absolutely stunning and well worth the brief visit while you are in the Roman Forum.

The Vestal Virgins were Roman priestesses who dedicated their lives to Vesta, goddess of the hearth. Their main job was to mind the sacred fire which was not allowed to go out. Looking at the size of the complex, which was started in 700 BC but was rebuild many times, you may get the impression that there must have been a whole convent of Vestals at any given time, but by the looks of it there were no more than a handful watching the fire.

Recruited girls were younger than 10 and had to follow the chastity rules. Only after their retirement they were allowed to marry. The role of the Vestals was highly regarded and very important, so no wonder their house is located so close to the Forum. Wandering around the complex you can still feel their presence: the beautiful statues and the still double pool in the middle of the atrium are simple and beautiful.

Upon entering the site of the Roman Forum this will probably be the first monument that you will see. The Arch of Titus is an imposing and sturdy looking structure right at the beginning of the Via Sacra. It is remarkable in its clear and straightforward design, and a model for triumph arches all around the world, most notably the one in Paris.

When you approach the arch make sure you have a closer look at the relief work on the inside of the arch which celebrates the spoils taken from the Temple in Jerusalem. The seven-branched menorah and the trumpets are clearly visible, and because of it the arch is considered a symbol for the Jewish diaspora. For a long time Jews refused to walk under the arch.

The Imperial Palace complex on the Palatine

As I said before, I came to the Roman Forum completely unprepared, and once I had studied the ruins around the core of the site I assumed that there was not much more to see here. Boy, was I wrong! Once you climb the Palatine you enter a whole new site which is dominated by the ruins of the mind-blowing Augustine Palace.

In fact, the name Palatine is the origin of the English word “palace”, so the Domus Augustana is not just a simple house but a massive complex of tall walls, elaborate garden courtyards and a complete “stadium” (it is not clear whether the stadium is in fact a stadium, the true nature of the area is disputed).

The views from here are great: the palace used to overlook the Circus Maximus, another site that I remember vividly from my Latin studies, just like the Pantheon.

This is just a selection of things that you can see in the Roman Forum. Please feel free to check out the photos on the bottom of the post! 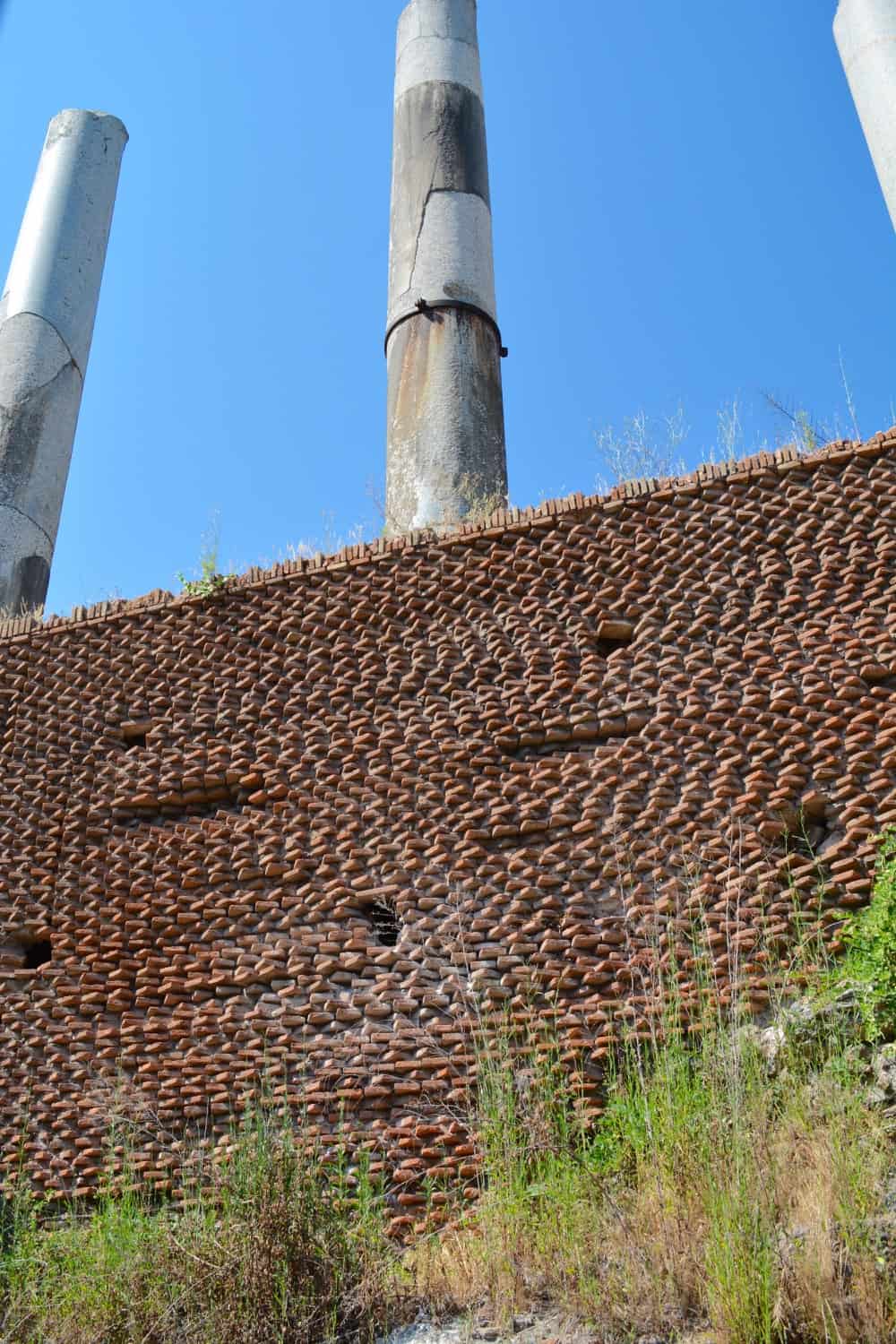 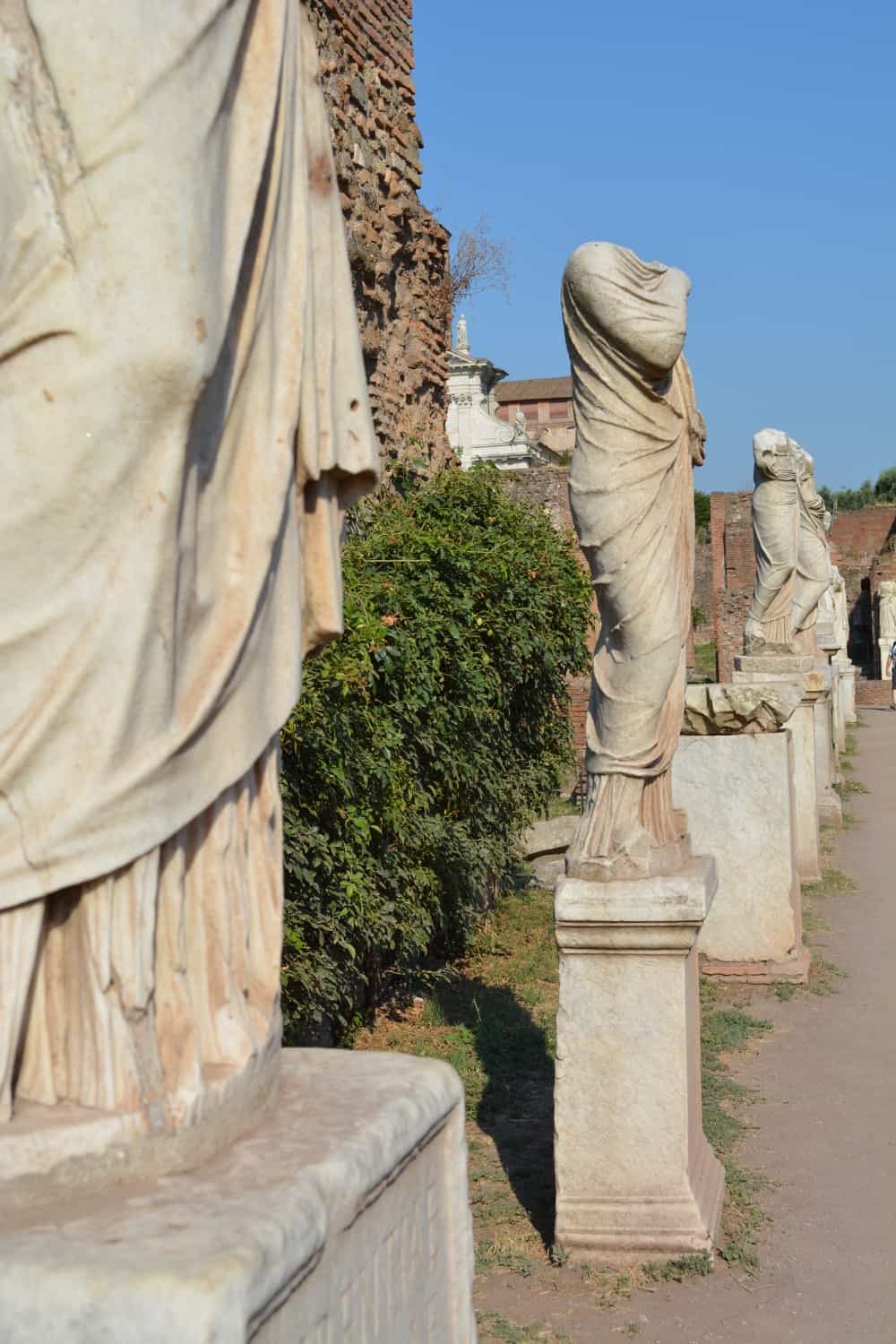 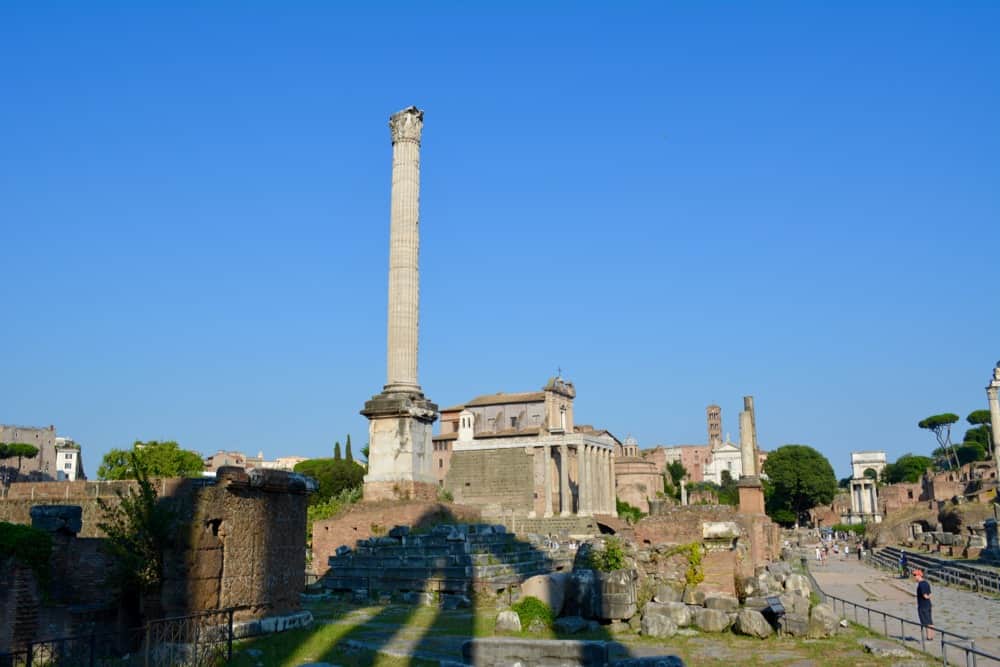 When a hole in the ceiling makes all the difference

Highlights of the Vatican Museums