There are things in life that you take for granted. Sugar is sweet, for example. Fire is burning hot. Lavender smells like your mother’s bedsheets. Stuff like that.

But sometimes you travel to places where things that you have taken for granted are shaken up and turned upside down. Places that challenge your outlook on the world, that make you wonder what else you didn’t know about.

One such place is the old mining area of Rio Tinto in Huelva in the south of Spain.

A River the Colour of Clotted Blood

The water of the River Rio Tinto is not blue nor brown nor green like the water of other rivers. If you have always thought that this was the palette of colours that was available to a river then you are now proven wrong. As the name suggests, Rio Tinto is indeed red.

Now, there are different kinds of reds in nature. Strawberry red and the red of roses, for example. The dark red of red wine and the orangey red inside a blood orange. In the case of Rio Tinto, it’s the kind of red that sliding on a scale between the colour of thick blood that is about to clot and the near black of cherry cola. In the shallows, hues of ochre and glowing orange come into the mix.

It’s a sight to behold, a freak of nature, a wonder like no other. Given how much Rio Tinto makes you question your perception of reality it’s a big surprise how little it is known around the world as a tourist destination. 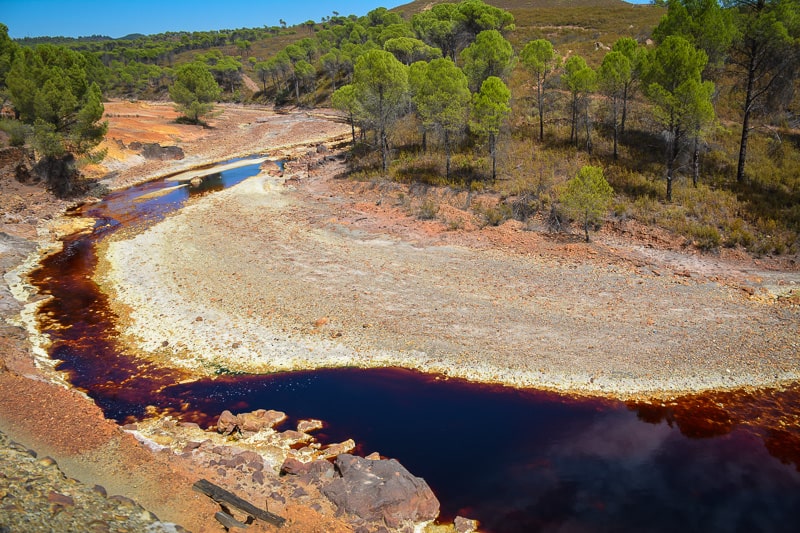 A History of Mining

There is of course a good reason for the red hue in the water. The area of Rio Tinto is rich in minerals and metal deposits. For more than 3,000 years, people have mined the area to extract copper, silver and gold and bring it to the surface of the earth.

The colour in the river that flows through the area is testament to the high iron content in the soil. The red is quite the same phenomenon as rust – oxidised iron.

So even though the water may look toxic thanks to human interference, the colour is actually just a jest of nature. But of course, mining operations in the area did impact the environment on a grand scale, and when you visit you will see how much humans have changed the landscape in order to reach the valuable ores.

A Train Ride in the Riotinto Mine

The best way to see the blood red water of the river is by booking a return ticket on the heritage mining train. The narrow gauge rail was opened by the British in 1875 to help transport the minerals quickly and efficiently to port in Huelva. 12 kilometres of the railway remain in the old mining area, and today you can book tickets to travel down the last remaining part of the tracks and back again.

Your journey will take you along the Rio Tinto, rattling and shaking. Take a seat on the left for the best views through the open windows, have the breeze ruffle your hair as the wooden carriages jolt into motion. The voice from the loudspeakers explain the scenery, but it is all in Spanish. So we just sit back and relax.

Overall, traces of human interference with the landscape. Slag heaps, and tunnels, the foundations of bridges, the deck long gone. Abandoned buildings with shattered window panes, the doors ajar. The colour of the terraced holes, the broken mountains, the man-made hills vary from a rusty red to a silvery grey. It’s a busy, broken, healing landscape.

The river joins us some minutes into the journey. For the next couple of kilometres it will be our loyal companion. Like a red snake it slithers through the scenery, contrasting with the pretty light green tufts of the conifers. A magical, otherworldly landscape of bizarre colours, like a trip to Mars.

Before we return along the same tracks back to the station we are allowed to get off the train and find our way down to the river. We walk on stepping stones all the way to the middle of the stream. For a moment, we become part of this alien landscape.

Places like Rio Tinto can do something that is very special. They can make you wonder again. Take you back to the days of childhood when things were still new and you didn’t take them for granted.

These places encourage you to question the world around you, awake your curiosity, challenge you to see things differently.

You thought that all rivers were blue? Well, you were wrong. Now go and see it for yourself.

A day in Cádiz, the city of a hundred towers

Gaudís Sunflower House in the North of Spain