No Time for Vertigo: Caminito del Rey near Malaga

Caminito del Rey is a nature experience like no other in the south of Spain. A wonderful day trip destination from the Costa del Sol. Read here what you need to know about this hiking trail near Malaga. At the end of this travel blog post we explain in detail how you can order your tickets, and we share our best tips to make your hike an unforgettable experience.

The Caminito Del Rey, a place that challenges you to test your limits. But sometimes it takes a friend to make the first step.

My friend Coralie from travel blog Tea Time in Wonderland is a friend who belongs to the third category. She tends to push my limits over and over again, mainly because my limits start very close to home and there is a lot of room to grow.

The other day she sent me an e-mail in anticipation of her upcoming visit to Andalusia where I live. It announced that she had booked tickets for the two of us to the Caminito Del Rey, a hiking trail in the area. Not a question but a statement. I was already made her accomplice on this one, there was no way I could get out of it anymore.

Caminito Del Rey: The Most Dangerous Walkway on Earth

You might think, what is so bad about the Caminito Del Rey that you feel like backing out of the idea straightaway? You see, the Caminito has a bit of a reputation. On its main stretch, the path has long been known as the most dangerous walkway on earth. It follows the river in a narrow gorge between two hydroelectric power plants and rises some 100 metres above the ground.

For many years, hikers from all over the world used the remains of an old workers’ trail to enjoy the spectacular scenery, even though walkers fell to their death almost on a regular basis as they were attempting the walk.

When the trail fell further into disrepair, the local government finally decided to close the entirety of the path and to construct a new, much safer boardwalk. It was re-opened only a couple of years ago and has soon developed into a wonderful nature experience off the beaten path.

No Time for Vertigo

Even though standards have massively improved you cannot help but feel slightly uncomfortable when looking at the pictures. Yes, the trail is much safer now, it’s broad and secured, no need to worry that cables would snap or boards would come lose. Yet, the height of the path, the steep cliffs of the gorge, the gurgling sounds of the river under your feet, all of this surely must trigger your vertigo? 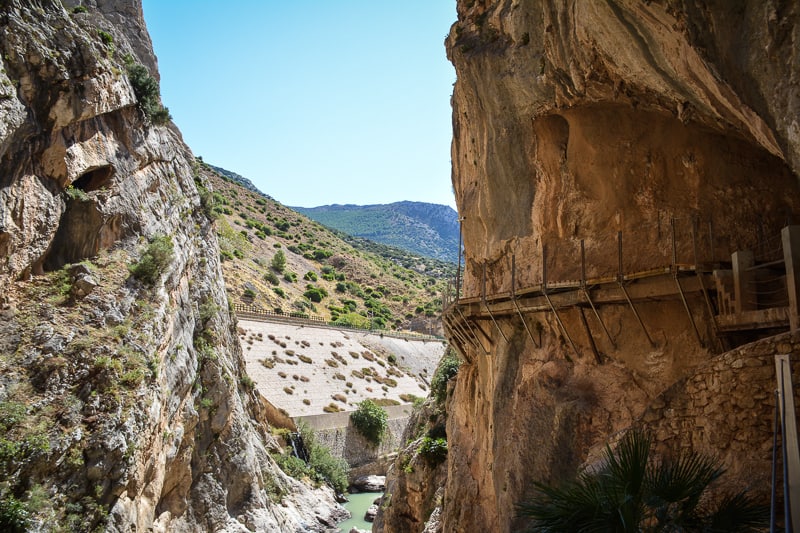 As it turns out, it does not. Quite the opposite. The minute you leave the carpark of the Caminito Del Rey and step through the short foot tunnel only you be greeted by a beautiful valley on the other side you feel like you have come to the right place. Even the hard hats cannot stop your enthusiasm as you step through the gate and make your ascent to one of the most beautiful nature reserves that Andalusia has to offer.

The valley around you is alive with birds. There is water everywhere – such a precious sight after a long, hot summer in the south of Spain. The air is heavy with the rich scents of the forest, clean and fresh on a beautiful summer morning. How could you possibly feel fear on the Caminito Del Rey when everything around you is just embracing life?

The Walkway of the King

The Caminito del Rey goes through a terrain of gorges and valleys. There is water everywhere but also the remains of early industrial development that used to support the hydroelectric power plants and the railway to Malaga. You will see workers’ huts along the way that have fallen into disrepair. Viaducts for the railway. Dams to regulate the water, tunnels to help move material from one site to the other.

But the most spectacular feature of the walk is the remains of the old Caminito del Rey. In most sections, you can still clearly see the path as it clings precariously to the steep rock walls. The old concrete just crumbling away, with no railings and with wide gaps between. It really makes you doubt the intentions of previous walkers who considered this old path a viable option to cross the El Chorro gorge.

But most of all, you cannot help but enjoy the lofty feeling of being halfway up the cliff wall. You can watch the sparrows as they zoom to their hideouts somewhere in the nooks of the rocks. Feel the cooling breeze as it squeezes through the narrow gorge which in some places is just ten metres wide. Hear the woosh-woosh-woosh of the high-speed train as it suddenly appears from out of a tunnel and disappears into the next.

For international visitors, the Caminito del Rey is still a pretty unknown attraction in Andalusia. And its reputation for being one of the most dangerous places to hike doesn’t help. What I found was that the walkway is not dangerous at all – in fact, I have already made plans to come back with my family and walk the Caminito together with the kids.

In the end, I was thankful for my friend Coralie who continuously pushes me to try something new. As she would put it, vertigo is no excuse. Fear is no excuse. Doubt is no excuse. You only live once and you should make the most out of it.

Push your limits, seek out the extraordinary, find something new to try every day.

A Great Day Trip From the Costa del Sol: How to Visit the Caminito del Rey

Because it is such an unknown destination for international visitors, here are some things you need to know:

There are a carpark and a visitor centre with museum under construction nearby, but for now, just park your car near the restaurant on the north end of the walk. This is important, as you will only be able to access the Caminito Del Rey from the north end. From here, take the short foot tunnel to the other side and walk around 20 minutes to the control point. This is the last opportunity to use the toilets.

Collect your hard hat and meet with your guide, or simply do a self-guided walk. It’s best if you book your ticket beforehand as there are limits as to how many people can access the Caminito at any given time. Tickets are around EUR 10 per person without a guide, EUR 18 with a guide, add EUR 1.55 for the shuttle bus.

You will need around three hours to walk the Caminito and your endpoint is the south access. There is a kiosk there for ice-cream and refreshments, as well as another car park in case the other one is full (which is possible in particular on weekends when locals visit the nearby lake for boating and swimming).

You can then take the shuttle bus back to your car which runs every 30 minutes.

Alternatively, the train from Malaga stops at the south entrance, so you can start your visit by taking the shuttle bus from the train station to the north access and then take the train back to Malaga.

Tickets to Caminito del Rey are sold out quickly. To avoid missing out, secure a ticket through one of the organised tours:

Powered by GetYourGuide. Become a partner.

More pictures at the end of this post, enjoy!

My attempted escape to a white village named Mijas

5 Ideas for a Romantic Day in Cambridge, MA