Planning a trip to Melbourne, Australia? Wonder what are the things that you simply cannot miss? Which beaches you could visit? What day trip options there might be available? Read here in this Melbourne Travel Blog post everything you need to know before you go! We explain to you when to go, what to do, why you should go and what to expect.

Sydney or Melbourne, Melbourne or Sydney. There is still a bit of a feud going on when it comes to which Australian city is “better” in some way or the other.

Truth is, both cities have their perks, and it’s up to personal preference to decide which of the two is the more appealing. By comparison, Melbourne has a more sophisticated feel to it, with a European looking city centre that is dominated by its famous trams and the colonial-style buildings. Shopping is fantastic here, and so is the laneway culture which is so unique to this city – by comparison the Sydney CBD is bleak, boring and lifeless.

Melbourne, however, is not a city with a strong beach culture, and its attitude could be described as more settled rather than flippant.

I really like visiting Melbourne for a weekend, because even though it’s just a short plane trip away it is like stepping into a whole now Australian interpretation of big city living. And just as much as I liked visiting, I used to love to return home to get back to the laissez-faire attitude of Sydney.

Melbourne is a great city destination in Australia that surprises with its rather European flair.

There are two major airports, Tullamarine and Avalon, serving the city so be mindful when booking which one you choose.

Melbourne’s city centre is that of a planned, grid-like city next to the banks of the Yarra River which makes orientation ridiculously easy. Major shopping roads are Bourke and Collins Streets which both run parallel to the river, with Swanston Street crossing both main arteries in a right angle. It is here that you will find the most important buildings and venues such as the Town Hall, the St. Paul’s Cathedral and major department stores.

Flinder’s Street Station is the most recognisable landmark of the city, right on the bridge crossing the Yarra River and opposite Federation Square and ACMI, a cultural centre dedicated to film, television and gaming. Upriver you will find the Royal Botanic Gardens, the Melbourne Cricket Ground and the Rod Laver Arena (where we once watched Nadal at the Australian Open), while downriver is SeaLife, the Crown Casino, the Convention and Exhibition Centre, the Eureka Skydeck (the highest observation deck in the Southern Hemisphere), and Docklands. Read here about 10 things to try in Melbourne.

The real essence of Melbourne, however, can be found in the maze of laneways and arcades which connect the major roads for pedestrians but not cars. A wonderland of exciting bars, cafés and restaurants, as well as cool shops and surprising street art – start at Degraves Street and just drift along in the sea of people. Check out our self-guided laneway tour!

Melbourne’s beaches are just a tram or a train ride away, with St. Kilda being the most notorious one of the bunch, known for its vivid party scene, the trendy restaurants on Acland Street and the eclectic Sunday market on the Esplanade. From St. Kilda onwards it’s a string of beaches, each one with its own distinguished feel. Since Melbourne is located around the bay of Port Phillip you will need to wait for strong winds to give you the right conditions for surfing.

Melbourne is a fantastic base for a diverse range of day trip destinations. Great day trips can be organised to Ballarat (where you will find the fantastic open-air gold mining museum of Sovereign Hill), the Great Ocean Road (with the famous 12 Apostles rock formation), the wine producing region of the Yarra Valley, the picturesque countryside of the Dandenong’s (where you will find Puffing Billy, the historic railway) and Phillip Island (with the biggest fur seal colony in Australia and some really cute penguins which you can spot during the daily penguin parade at sunset).

Melbourne’s street art scene is thriving. The tiny laneways between the bigger shopping streets of the city centre are covered in colourful and ever changing urban art.

These recommended Melbourne tours are a great way to discover Australias most liveable city. See all the important sights including the Great Ocean Road, Phillip Island and the Mornington Peninsula, and feel right at home with these hand-picked tour recommendations!

The Best Things About Melbourne

People always comment on the European feel of Melbourne, the vibrant café and restaurant scene, the great cultural institutions, the world-class sports events and the trams in the city centre (which, by the way are free in the inner city zone, how cool is that?).

They say there are four seasons in a day in Melbourne, and this is probably one of the most striking characteristics of this city. And by comparison with Sydney, the climate is overall colder in Melbourne. And while there is the mighty Yarra flowing through the city, the lack of stunning beaches is really a little bit off-putting (sorry, Melbournians!).

Things not to Miss When in Melbourne

Lose yourself in the laneways in the city centre of Melbourne, discover great street art in Hosier Lane and pay a visit to the fabulous Montsalvat to wander among the fairytale buildings and discover contemporary artwork. Have a drink in Brunswick and catch the seaside vibe in St. Kilda.

Melbourne has a great artistic vibe. Do check out the wonderful street art in the laneways!

Yes, you do need a winter jacket in winter, as well as a beanie and a scarf and warm jumpers. In summer however, prepare for the worst. And no matter what time of year, make sure you pack a brolly (umbrella).

Melbourne is a great destination all year around. Even on rainy days there’s something on and lots of stuff to discover. Enjoy balmy nights in a street café or stroll through the National Gallery of Victoria, shop at the Emporium or plan a day trip to the Great Ocean Road – the choice is all yours. To avoid peaks in accommodation rates, check that there are no major sporting events (Melbourne Cup, Australian Open, Grand Prix) or bigger conventions on.

Yes, there are beaches in Melbourne, and St. Kilda is probably the most obvious choice. There are not many waves here, but the boardwalk is broad and inviting and it’s only a couple of steps to Luna Park and trendy cafés and restaurants. Brighton Beach, just 25km from the city centre, is a great spot for surfing and swimming and it’s also home to brightly coloured bathing boxes which make for stunning photo subjects. 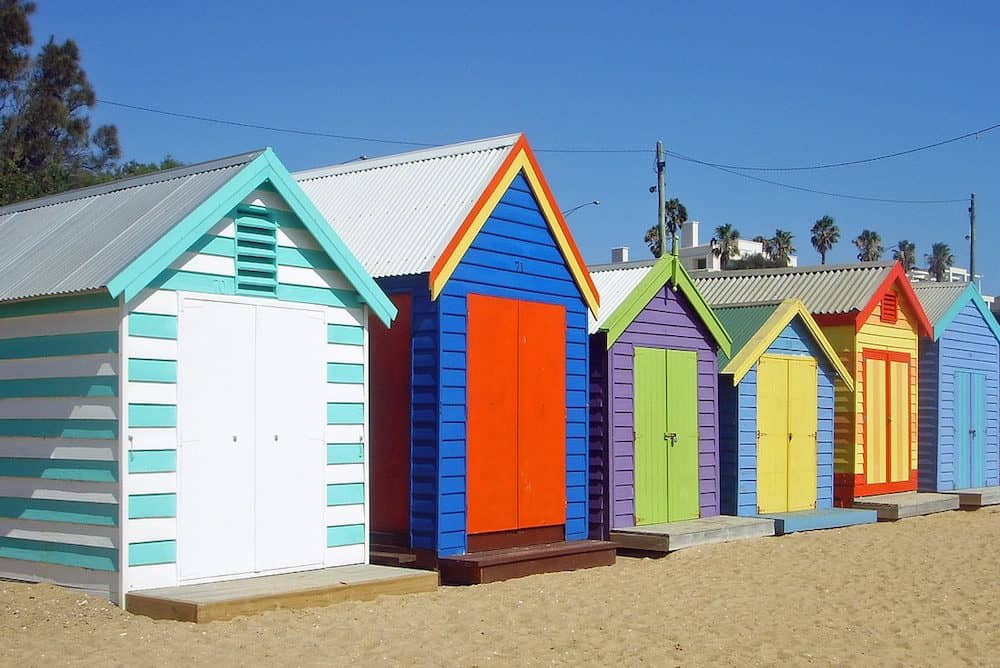 Colourful bath houses on Brighton beach in Melbourne. Melbourne may not have as many amazing beaches as Sydney, but it’s still possible to find a decent strip of sand in the city and surroundings.

Melbourne is well served with trams, busses and suburb trains. Within the inner city centre the use of the tram is free. You will need to buy the cashless myki card to get around – if you stay within the free zone then you don’t need to touch on and off. Driving can be rather confusing due to the fact that trams are given priority and that right turns very often need to be done from the left side of the road.

Just like in Sydney, food in Melbourne has evolved to compete on a global scale with other metropolises in the world. And world-renown chefs have set up camp here, take for example Heston Blumenthal’s Fat Duck. Crowd-pleasers are for example Rice, Paper, Scissors; MoVida; Eau de Vie; and Sezar.

Besides the usual cheap Australian-themed stuff like boomerangs, Aboriginal art and Ugg boots, check out also Melbournalia in 50 Bourke Street for some locally made gifts and souvenirs such as tea towels, ceramics, cards and toys.

Melbournes Laneways and Arcades are great for people watching, shopping and coffee sipping.

Top accommodation choices for Melbourne: These hotels have been rated “wonderful” on Booking.com. Please note that this is an affiliate link, which means that if you book via this link a small commission will come my way which will help support this blog. I have used Booking.com for my own trips in the past and can really recommend them without bias.

Not ready to book yet? Check with TripAdvisor hotel reviews and rates.

We loved our stay at QT Melbourne, read our detailed review here.