I had only spent 20 minutes in this small thatched cottage but it felt like a lifetime. In less than half an hour I had watched the skilful preparation of Irish soda bread, I had tasted the rubbery texture of foraged seaweed and I had listened to the guttural poems and melancholic songs of the Connemara Gaeltacht.

A fragrant peat fire in the open hearth radiated warmth on this fresh October morning as we were learning more about the culture of Ireland’s traditional West. A truly Irish setting which allowed me to immerse myself with all my senses into everything Irish. Cnoc Suain Cultural Centre in Connemara helped me understand what exactly that meant. 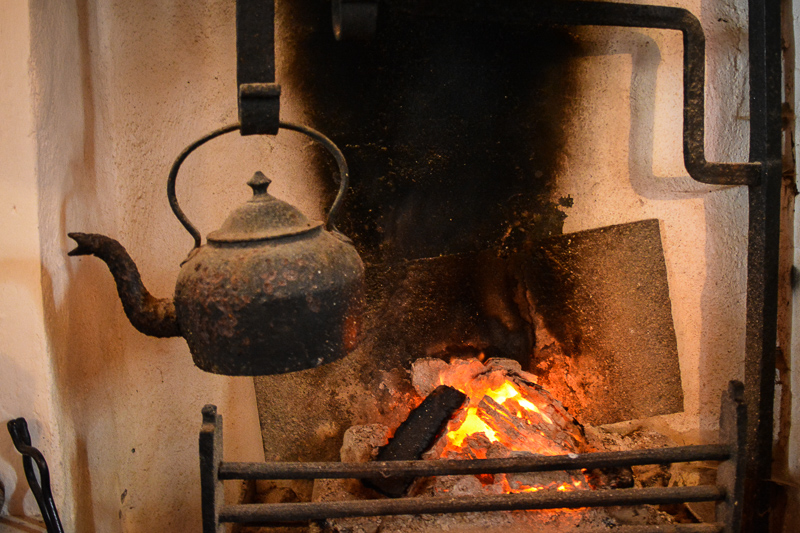 It seemed like a simple question, but really, what exactly was Ireland anyway… Was it the wild and barren landscapes of bogs and harsh coastlines? Or was it the people with their welcoming smiles and their gentle nature, the stories they shared, the longing and subtle sadness that shined through in every poem, every song?

As I was looking in the flames, the salty taste of seaweed still on the tongue and listening to an ancient Gaelic poem, I realised that it was something in the middle of all of this. It was not just the land, nor was it just the people. It was in fact the way people interacted with this land.

I was at Cnoc Suain. A couple of years ago, Dearbhaill and her husband Charlie had bought this old hilltop village in the middle of the unspoilt Connemara landscape with a bold vision in mind. After many years of hard work and quite a few setbacks they had made their vision of creating an Irish Gaeltacht centre a reality. At Cnoc Suain, just 20 minutes from Galway, they now transported me as well as many other visitors away from modern Ireland to explore the very essence of Irishness.

Immersed in a vast landscape of browns and greens, this family-run and award-winning cultural centre introduced us to the Irish culture in a depth and width that was not expected. 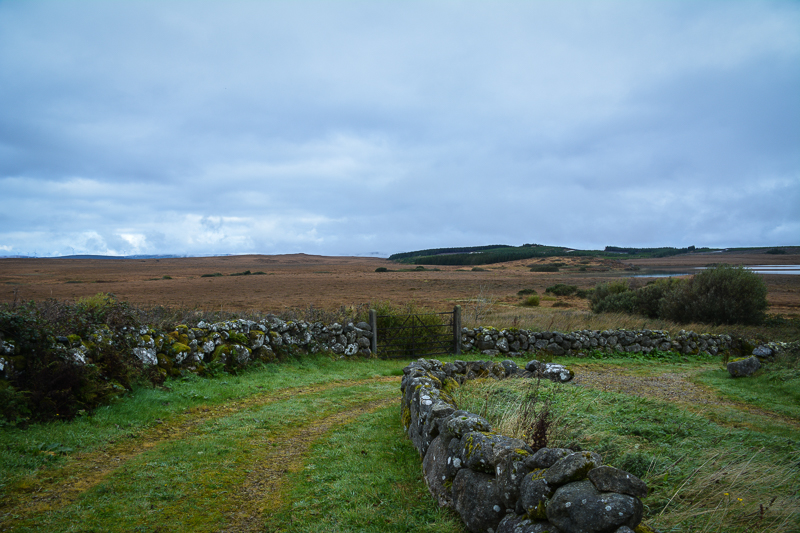 Food was an important theme in the Irish history. Ireland never had had a wealth of food options available. The climate was warm and temperate, the soils not always suitable for agriculture. We had all heard of the Great Famine that decimated the population in the 19th century through starvation and emigration. So Ireland’s story was not about how to prepare the most delicious dishes by using a variety of ingredients. Rather it was about being inventive, sustainable and resourceful.

Dearbhaill, our Irish host, showed us how to make Irish soda bread, a dark brown bread with a subtle sweet note that restaurants would offer on the side with hearty stews and soups. Mixing the ingredients together took her just five minutes, a perfect loaf, ready to be baked in the oven or in the open fire for an hour. “Irish mothers had a lot of children. They didn’t have time to watch the yeast do its work, so they used soda instead,” she explained with an elfish smile, probably remembering the days when her own children created havoc in the kitchen.

Seaweed, a quintessential Irish staple, came next. We took turns tasting the different varieties, trying out the textures. Rubbery and with a slight salty flavour, yet nothing to go crazy about. For the Irish however, seaweed was readily available no matter the season. It was foraged on the foreshore, cleaned and preserved. A versatile crop, used in a variety of dishes, free for the taking. We tried a sweet pudding that received its glutenous texture from seaweed and were surprised how palatable it was. 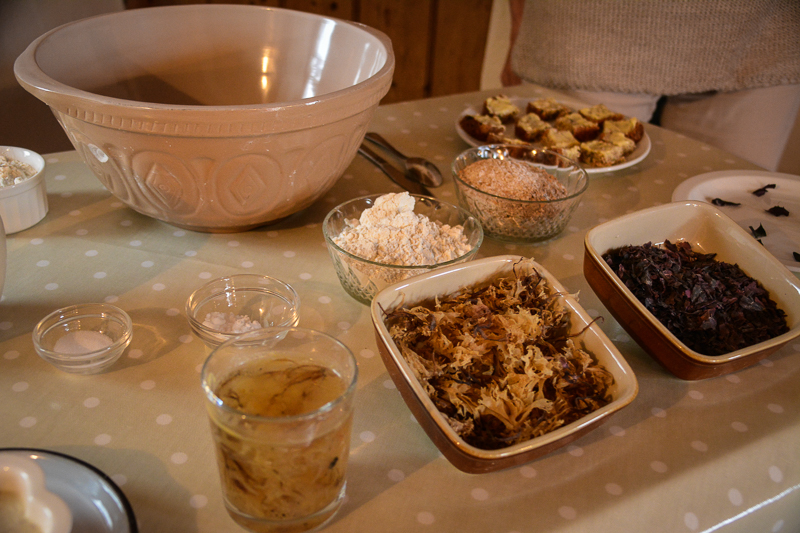 Peat as Means of Survival

From the kitchen to the shed, we learned about the importance of peat for the traditional way of living. How the plants that died on the soft soil never had a chance to fade away. How new plants were growing on top, pressing down on the dead material in a never-ending circle of life. The Irish landscape, we learned, was growing in height year on year, ever so slightly. Ireland was build on dead mosses and other plants, creating soft and moist bogs in beautiful shades or dark orange and deep greens.

Charlie handed us a block of this soft peat, recently cut from the bog. It was heavy with moisture, holding the rain water like a sponge. You could clearly make out the green plants on the top, and the deeper colours further down in the cut. From green to brown, like an archaeological segment that was allowing us to travel through time.

In the old days, men would cut the peat in summer and the children would stack these soft, heavy blocks on top of each other, to dry them out and ventilate them as much as possible. A backbreaking, tedious yet important task, as the amount of harvested peat would determine how much fuel the family would have throughout the long and dark winter months. Peat was a matter of survival. 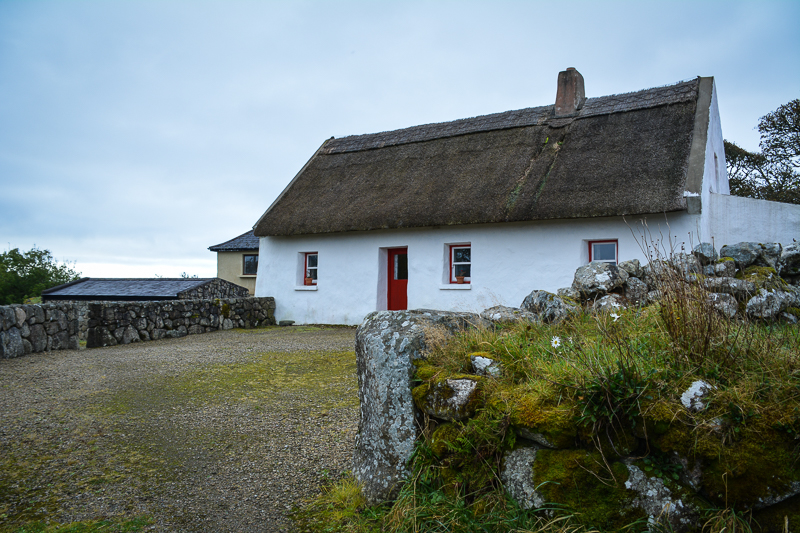 We finished our visit to Cnoc Suain with a musical performance. A traditional piper opened up for us one last time the deep cultural connection between men and their land, warming our hearts with the music of the local people and the deeply ingrained traditions of storytelling.

Before we left, I took one last walk around the old buildings of the cultural centre. A lovely and unique scenery: The thatched white-washed cottages with their brightly coloured doors and window frames. Drywalls and old trees that were covered in mosses and still carrying hardy fruit. A landscape that was a vast wilderness from here to the horizon. Far, far away from the noise of modern city life, cut off from mobile reception, separated from tight deadlines and everyday worries.

I was grateful for this exclusive experience. Our hosts for the day, Dearbhaill and Charlie at Cnoc Suain, gave us a brief but insightful glimpse into the traditions and the culture of the Traditional West in Ireland. With every little step on our journey through the lovingly restored 17th century hilltop village we learned a little bit more about what Ireland was all about. 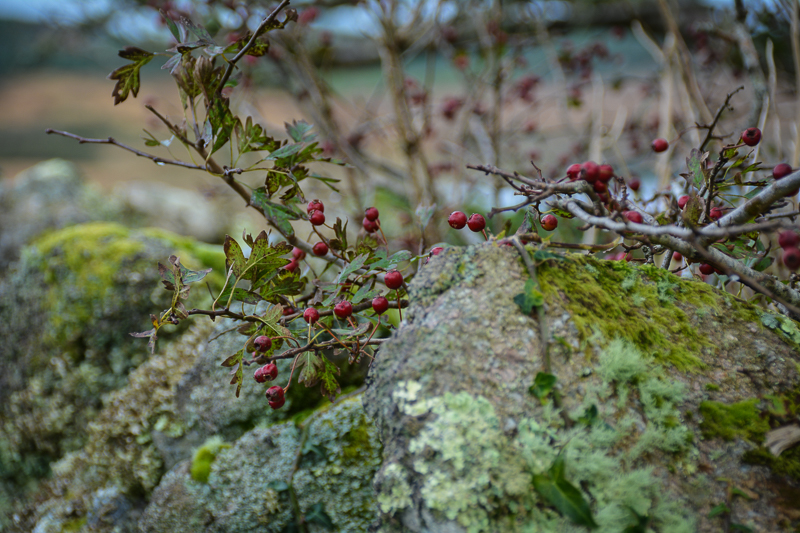 Tours to Cnoc Suain can be booked from Galway (individual visitors need to join a group), or alternatively you can stay in the residential area of the village as an overnight guest. A truly romantic getting-away-from-it-all experience for couples who like to stay in pristine natural surroundings and learn more about the Irish heritage.

For more info on how to visit Cnoc Suain and to enquire about rates, please have a look at the official website: Cnoc Suain Website.

Cycling in the bogs of Connemara 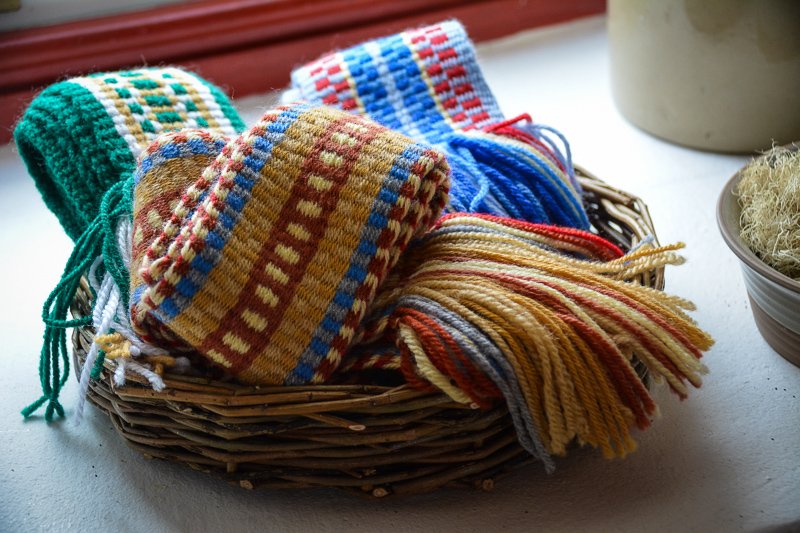 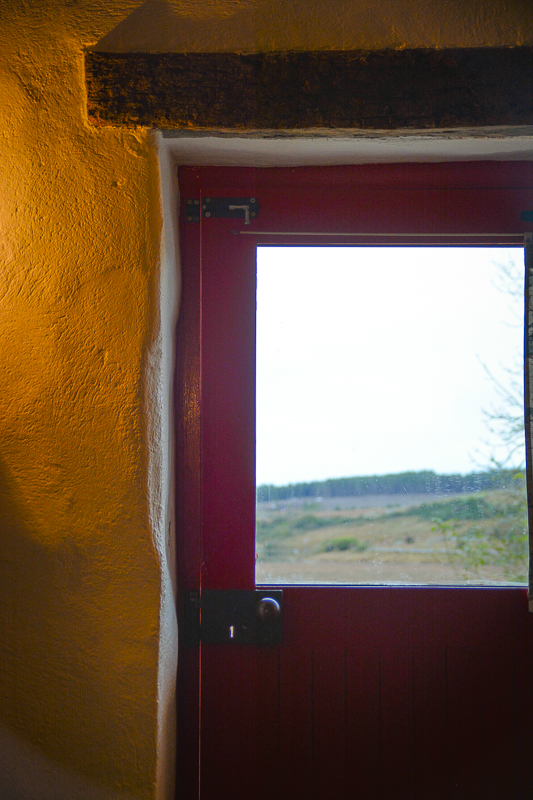 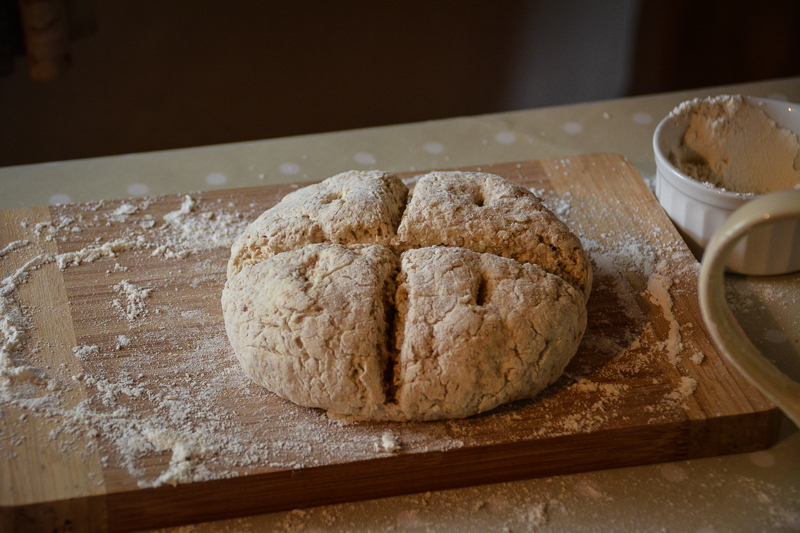 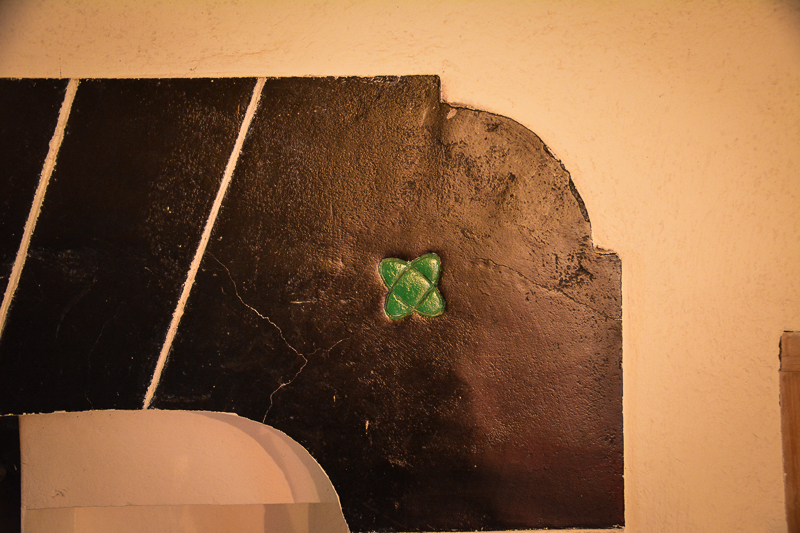 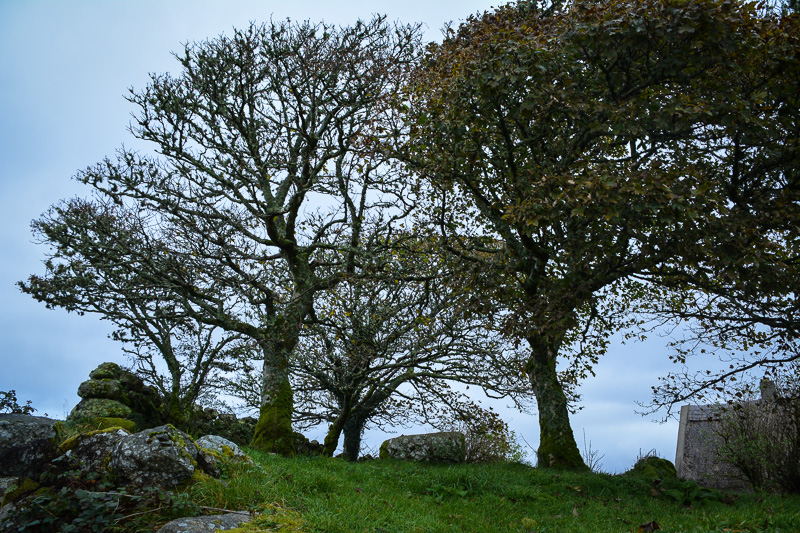 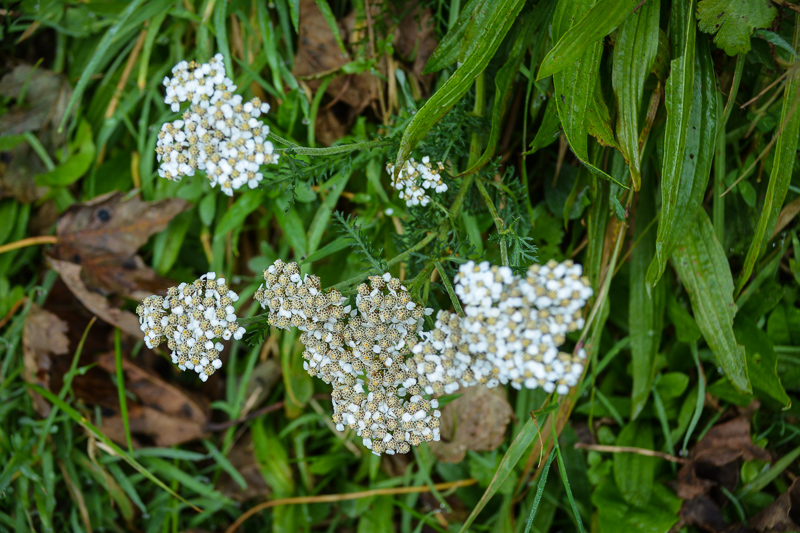 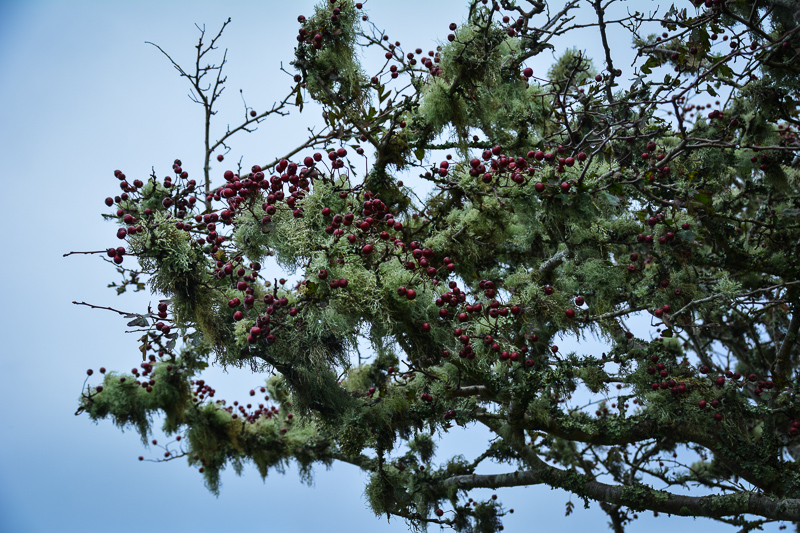 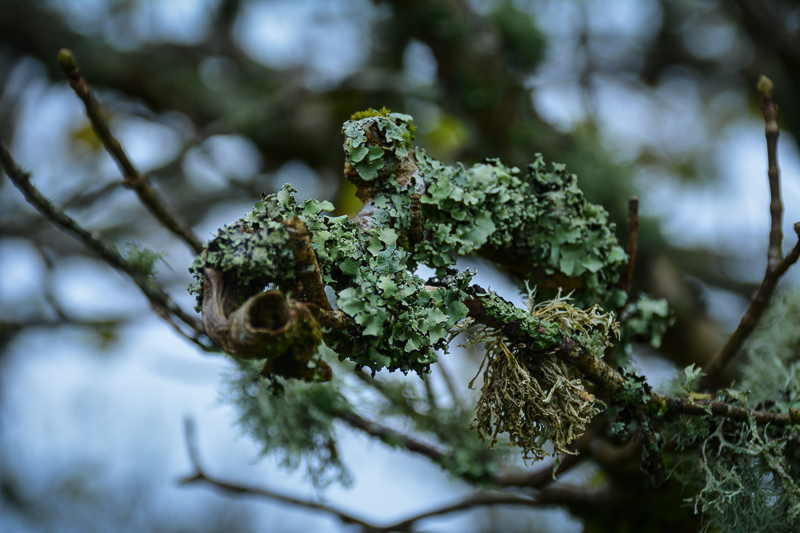 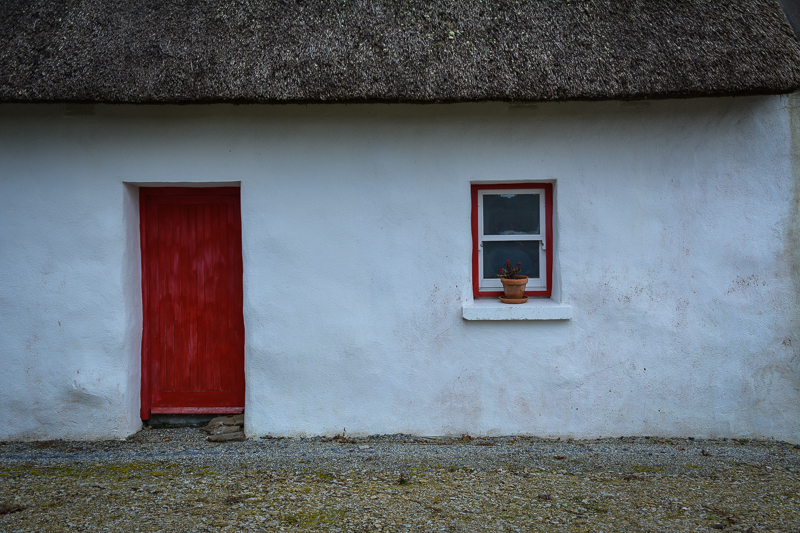 Repurposing For New Dreams: The Cartuja Monastery in Seville

Virtual Reality Cocktails at The Lobby Bar, One Aldwych London