World War I, World War II, the Cold War and the fall of the Wall – these are all key points in the history of Berlin that most people would want to explore when visiting the city.

But as a Berliner I can assure you that there is another side to the city, one that is less frequently explored by tourists.

Exploring an Ever Evolving City

Berlin is, of course, also a place that is ever changing, like a breathing organism. There are new people moving to the city every day, leaving their mark on the streetscapes and the arts, the language and the atmosphere.

I know, because when I moved back to Berlin after almost 15 years abroad I was told by many independent people that I would find a city changed, almost unrecognisable. It is not as dramatic as they made it out to be, but Berlin has indeed seen some incredible changes over the last two or three decades.

Hackesche Markt area in Mitte has seen a speedy transformation from cultural hub to high-end shopping. This little corner, however, still gives you an idea of how the area looked like before gentrification kicked in.

What kind of changes these were I could explore with the team from Insider Tour Berlin who kindly invited me to join one of their English-speaking tours.

Not a walking tour per se, because we were covering a lot of ground and had to rely on public transport. But a very relaxed, four hour, small group experience that took us from the well-known sights of Mitte to the lesser known local neighborhoods of Friedrichshain and Kreuzberg. Check out my review below to see if this might fit in with your way of exploring a city as well.

Looking Beyond the Headlines of Major Historic Events

The tour starts at Hackescher Markt (there is another starting point in West Berlin near Bahnhof Zoo) where people could join spontaneously, paying the fees on the spot. Ours is just a small, intimate group of six, me and the guide included, hailing from all corners of the globe. The guide himself, Taylor, is from New South Wales, Australia, and he has been living in the city for many years. In fact, he knows much more about the history and culture of Germany and its capital than I do, a native.

Taylor is a crafted storyteller who immediately evokes our interest by painting a imaginative picture of how life in Berlin has been just before and immediately after the fall of the Berlin Wall. While almost every other tour company would just look at the historic event that would change a nation and would end the Cold War, this tour actually questioned what effect this event would have on the city and the people living in it.

Gentrification and Preservation in a Reunited City

Berlin has always been special. A city divided, it has been deeply affected by the German separation – culturally as well as economically. With all the industries moving to West Germany after World War II, Berlin was left with ruins and a struggling economy. In order to attract young, capable workers, several incentives were put into place, most notably the right to skip mandatory military service after highschool. I think we can all imagine what kind of crowd this attracted to the city.

So when the Wall came down, the city already had a more alternative, creative and left-wing vibe than the rest of the nation. Originally centered around the area of Kreuzberg, a classical workers’ neighborhood, the scene soon moved to East Berlin where housing was cheap and sometimes even free, if you didn’t have issues with living in a ruined house.

Kulturbrauerei is fine example of how civic interference could stop the bulldozing powers of major development companies to preserve a piece of local community in a changing city.

With this preface in mind we proceed to visit the first stop of our walking tour, not just exploring the posh inner courtyards of Hackesche Höfe in Mitte, now beautifully restored and a hub for designer shops and boutiques, but in the years after German reunification a mecca for creatives and artists trying to make a living in the city.

Some of the relicts can still be seen today, just walk a little bit further until you reach the street art courtyards at Rosenthaler Str. 39.

Culture, Art and Local Life in a Revived Berlin

As we would see later on, Berlin is covered in street art from head to toe. We see it in several places on our tour, very often not curated like here but simply tolerated. It is indeed the make-up of the city, mascara and blush all in one, and an integral part of modern day Berlin. As Taylor points out, it is not a sign of neglect or criminality, it is just part of what Berlin is and how the people will use it.

From Mitte we take the tram to one of the best known places in Prenzlauer Berg, Kulturbrauerei, a former brewery that is now re-developed to a culture and arts centre. On our way there, our guide gives some interesting background information on rents, cost of living and traditional Berlin foods – can you guess, what this might be?

Correct, the Currywurst, of course. Konopke”s under the rail overpass on our way to Kulturbrauerei is rumoured to be one of the best in the city.

RAW Gelände is currently one of the top places to be at night. Graffitis, trash and ruined buildings do nothing to stop people from having a good time here.

Nightlife and Street Art in Friedrichshain

From Kulturbrauerei we continue on our journey through Berlin to head to Friedrichshain, where we look at two places of interest in today’s city. From the nightlife quarter around Simon-Dach-Str. which at night is crazily busy with people looking for cheap eats and quality drinks, we walk on to one of the hippest and coolest places in Berlin at the moment, the RAW Gelände, or RAW area. This former train maintenance yard today is a nightclub heaven, with several discos, bars and techno clubs occupying the derelict looking industrial buildings.

It is a typical sight in Berlin. From the outside it is a total mess, strewn bottle caps and broken glass, piles of trash and tons of graffitis. But to the initiated eye this is an organic place full of creativity and fun, where you will meet the latest trends, always discover something new, and never get bored.

We inspect a Teledisko, a transformed telephone booth that now serves as a one-man disco. We hear about Haubentaucher Club which behind the hoardings of a ruined industrial hall hides a chique open-air pool and bar. We walk into an art gallery, Urban Spree, where we look at photo books with pictures of Berlin in the Nineties.

East Side Gallery is one of the last remaining stretches of the Berlin Wall. Decorated by international artists it has become a major tourist sight in Berlin and is a great place to feel the transformation that has taken place since reunification.

Oberbaum Bridge and the Kreuzberg Cosmonaut

From this more obscure part of the city we are heading to some better known sights, East Side Gallery and Oberbaum Bridge. Both have been featured heavily in guide books and travel articles, so I will just quickly say that this area used to be a border crossing point between East and West, with the East Side Gallery being a last remaining stretch of the Berlin Wall. We cross the bridge on foot, looking a neon light artwork to the left and to the right of the bridge playing rock, paper, scissors at night.

And just like this, we are in West Berlin. Walking the city streets once again, we can almost feel how different this neighborhood is compared to Friedrichshain which we had visited only a couple of minutes before. We look at the giant murals on Skalitzer Str. in Kreuzberg: the head made of naked bodies, the two giant 3-D skeletons, the Kreuzberg cosmonaut. 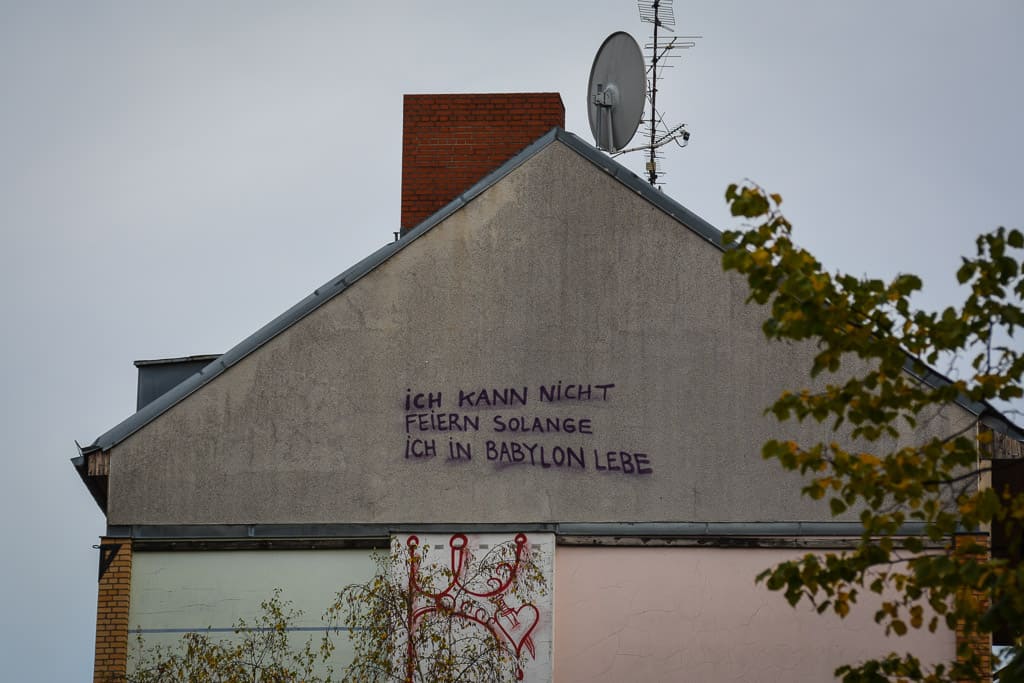 “I cannot celebrate for as long as I live in Babylon”. Street art is everywhere around the streets of Kreuzberg. Not exactly tolerated but accepted by a city that is constantly strapped for cash.

We talk about multi-culturism which has shaped this part of the city so much that it has become the new normal. Germany has been welcoming migrant workers for more than 40 years, and tens of thousands of them now call Berlin their home. They have shaped the city just like the “native” Berliners, added their own flavour to this place.

Our last stop, the Turkish Market in Neukölln illustrates this dynamic, multi-cultural society in this part of Berlin in the best way. Before we bid farewell, we are invited to browse the market stalls of this weekly market, maybe try some of the Turkish and Middle Eastern food that is on offer, or enjoy a lunch in one of the many cheap restaurants nearby.

Our Insider Tour of Berlin was the perfect way to dig much deeper and investigate an exciting and ever evolving city behind the shiny new facades of the Reichstag, Hackescher Markt, and Museum Island. By exploring the suburbs and the different neighborhoods, by mingling with the locals and hearing about the events that happened beyond the major news headlines we were able to get a much deeper understanding of what Berlin is today and where it might be headed.

The Turkish Market on the banks of Landwehrkanal is a great place to bargain shopping and to try new foods such as börek, suçuk and gözleme.

Insider Tour Berlin Today: A Great Tour to Get an Insider’s View of Berlin

Thank you so much to the team of Insider Tour Berlin for allowing me to join this tour for free in exchange for a review. Thanks also to our tour guide for the day, Taylor, who did a terrific job at showing us these hidden aspects of the city.

I am happy to recommend this tour to anyone who is keen to have a much richer experience than most visitors to the city and who would like to get to know the intimate corners of the best city in the world. For just 14 Euro per person plus your travel pass for around 7 Euro per person, this walking tour is indeed a great way to explore Berlin. For more info, look here → Insider Tour Berlin.

You may Also Want to Check This out

The Best 3 Day Berlin Itinerary for Your First Visit

The 5 Best Places to Enjoy Nature Around Houston, Texas