There are many things to do in Granada, even in winter. Because Granada in Spain is a city of many faces. It is full of colour and flavour. It’s abuzz with activity, no matter what season. Yet, further up in the silent streets of the old town it tempts us with promises of winter delights that only a city in the south of Europa can offer us. It may be warm enough to unzip your jacket but in the distance, we are greeted by distant views of snow on the peaks of the Sierra Nevada.

We spend a January day in the ancient old town of Granada. There are many things you can do here: from the busy maze of shops and streets of the Alcaiceria, which still surprises with exotic spices, patterns and flavours, to the most quiet corners of the Albaicin.

Here, in the squares of the old town, where restaurants have put out their chairs and tables, time seems to have stood still. It’s the perfect place to slow down and relax. While we sip coffees in the shadow of golden trees we know that we are already scheming our return.

Fragrances: Spices and Fresh Food in the Alcaiceria

Our day in Granada begins innocently enough. We start our visit to Granada with a quick stint to the light and airy cathedral. We leave the church through the backdoor and almost stumble on the vendors of fragrant spices and teas in the streets around the church. What we don’t know until later is that this is just outside of the Alcaiceria, the old spice market of Granada.

The vendors sell everything that delights your senses. Tea mixtures with fantastical names such as “Rooibos Christmas tea” with colourful sugar stars added to the mix. Others are called “Breeze of the Alhambra” and “The White Romantic Granada”. The open baskets presented in front of the shops, the aroma of the dried leaves hitting the receptors in our noses.

Things to do in Granada: A Temptation for your Senses

We walk past food vendors, selling dried and salted fish of all shapes and sizes. Their skins silvery and shiny, their little bodies carefully lined up in a circular pattern. Sacks of nuts, almonds, pistachios, shelled chestnuts ready to eat. Dried sticks of liquorice root, tied together with a ribbon. Huge dates, dried and fresh, and a bread made with sweet fig flesh. Pickled olives with fresh herbs, a dish of prepared bacalao.

The smells of tea have long been replaced by sharper notes. We see buckets of star anise, the multi-coloured pearls of pepper. Dried black garlic and artichoke hearts. We are reminded of the great bazars of the Middle East and India. The impression lingers as we cross the last main artery road to enter the Albaicin, the Moorish old town of Granada.

This close to the modern centre (speaking in relative terms) the streets are lined with little shops selling souvenirs. They are crammed with leather purses and silk scarves, colourful woven handbags, scarf with ethnic patterns, and Arab style slippers with pointed tips. Here, in the heart of the Alcaiceria, it’s a confusing mix of things to buy, tour groups, and lingering students.

But only a couple of steps further, and we are leaving all of this behind us. Because there are a lot more things to do in Granada. 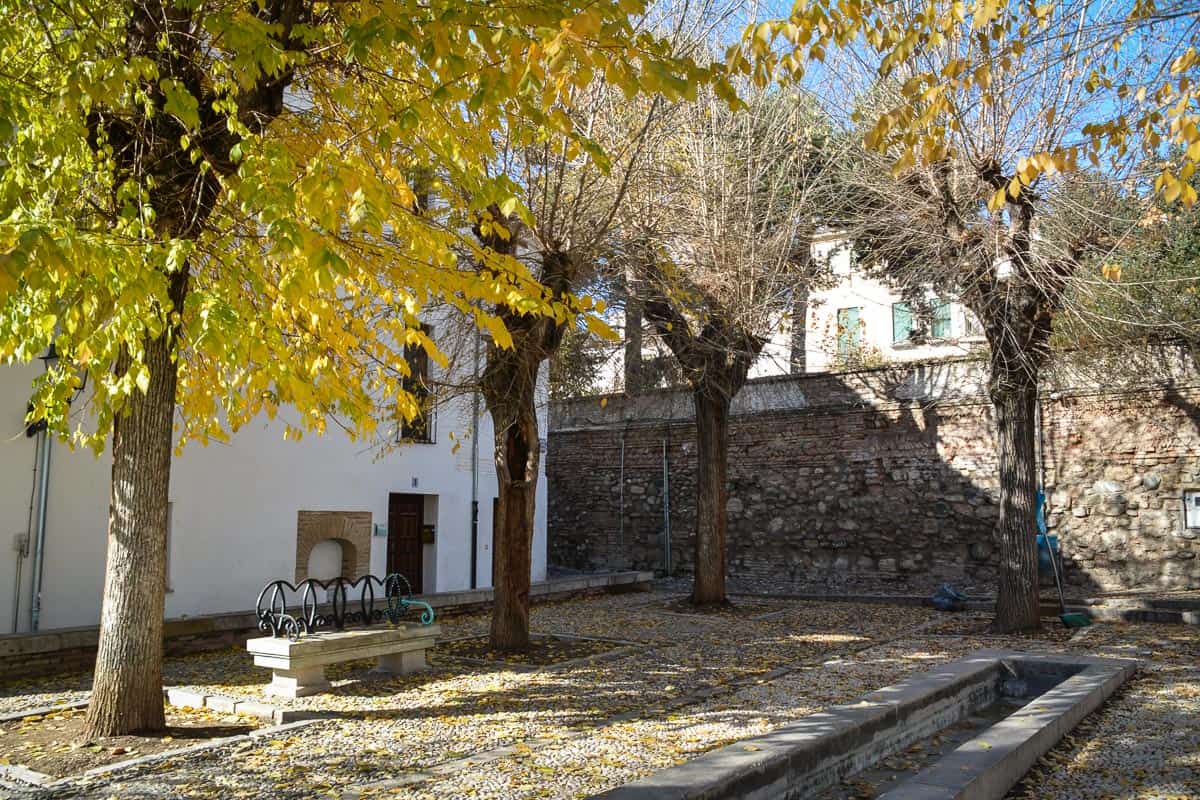 Fallen Leaves: The Squares of the Albaicin

The path takes us up the mountain and deeper into the Albaicin. The old Moorish quarter of Granada, where white houses line ancient roads that are paved with round pebbles. They make our walk even more strenuous, even though we wear comfortable shoes. Every step hurts but we hardly notice.

The roads have fallen quiet around us. No cars can get into this quarter, the roads are too steep, too narrow. The corners seem impossible at times, the stairs endless. We come past carmens, traditional houses with gardens of fruit trees behind high walls. Shrines in the corners of houses, trap doors in garden walls.

From time to time little squares open up the views, sometimes all the way to the Alhambra, the mighty fortress on the other side of the valley. As we are standing under trees with golden leaves we can see it clearly in the distance, and even further, there is the gleaming white of the snowcapped Sierra Nevada.

Our steps make crunchy noises in the empty streets of the Albaicin as we walk over fallen leaves, climbing higher and higher for the best views of the Alhambra.

We find it at the Mirador San Nicolás, where the muezzin in the nearby mosque calls for prayer. Satisfied with our trip to the city, we find a small restaurant on the Placeta de San Miguel, order our meals next to a little church.

Granada in Winter: A City for the Senses

Winter is the perfect time to see Granada – there are still so many things to do. Wandering the ancient streets of the old town you are kissed by the wintry rays of the sun but it’s not too hot to dare the steep streets of the Albaicin.

Go and see it for yourself. You will inevitably end up in one of the restaurants which serve food and drinks out on the square. The shadows are cool, so you may order a more hearty dish. Ox stew, for example, or garlic chicken with potatoes.

You may sip on a glass of white wine. Watch the lunch break workers eat their sandwiches on the church steps. And maybe you will the same thoughts as us: Granada, you are a city that will never disappoint. You are gorgeous inside and out, even in winter.

Beauty and Tranquility at Monasterio de San Jerónimo in Granada 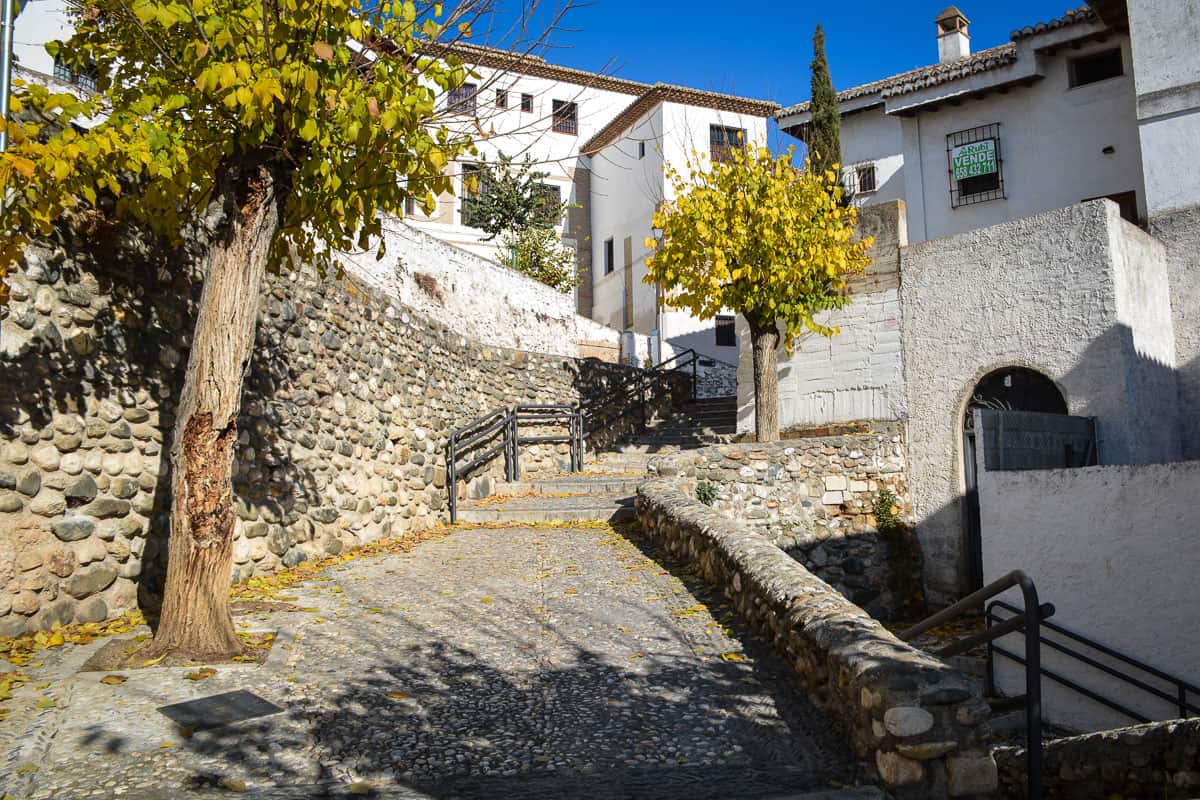