Gaudís Sunflower House in the North of Spain

What is your favourite flower? Well, for me it’s the sunflower. I live in beautiful Andalusia and in spring and early summer the fields are ripe with wonderful sunflowers. Like soldiers they stand guard, their faces all directed towards the sun. Their yellow colour is spreading happiness, their oversized heads are not without comic effect. To see whole fields of sunflowers when travelling down a country road in Spain is heart-warming.

Maybe solicitor Máximo Díaz de Quijano held quite similar sentiments towards sunflowers. At the end of the 19th century, he had just returned from Cuba to his small village of Comillas in the Cantabria region of Spain. As a solicitor he had made a fortune in the New World, he was what the Spanish call an “indiano”. Now it was time for Quijano to set up residence in his old hometown. He hired a young Catalan architect who happened to be in the area at the same time. His name was Antoni Gaudí. 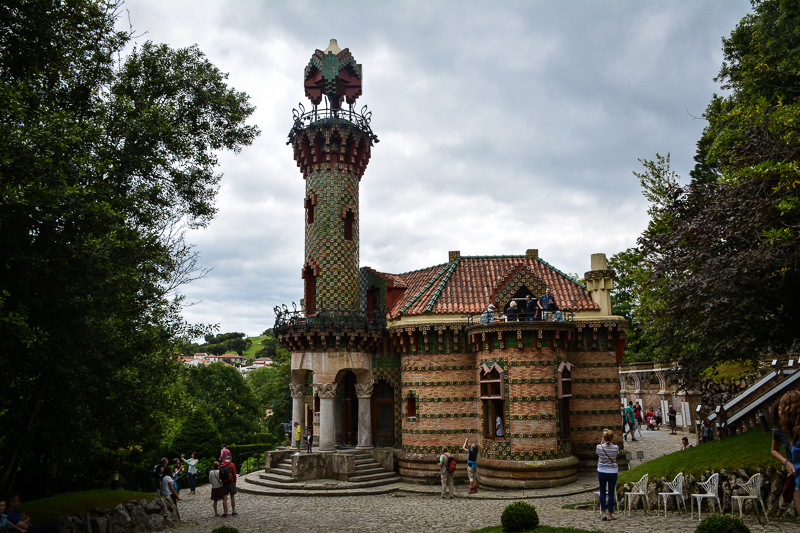 A Playful House Built by Spain’s Most Playful Architect

The house that Gaudí built for Quijano in Comillas in the north of Spain, is today known as El Capricho. A “whim”, as you could loosely translate it, beautifully playful and almost a little bit crazy. Many aficionados of Spanish modernism make the pilgrimage to Comillas to see the villa of Quijano, one of the rare examples of Gaudís work which can not be found in Catalonia.

So what does all of this have to do with sunflowers? The question becomes obsolete as soon as you catch sight of the house. The house front is beautifully decorated with handmade tiles with a sunflower motif. They dominate the whole appearance of the building and are the leading feature of the design. Each tile has been glazed by hand, and each one of them spread happiness in me just like the real flower in the field. 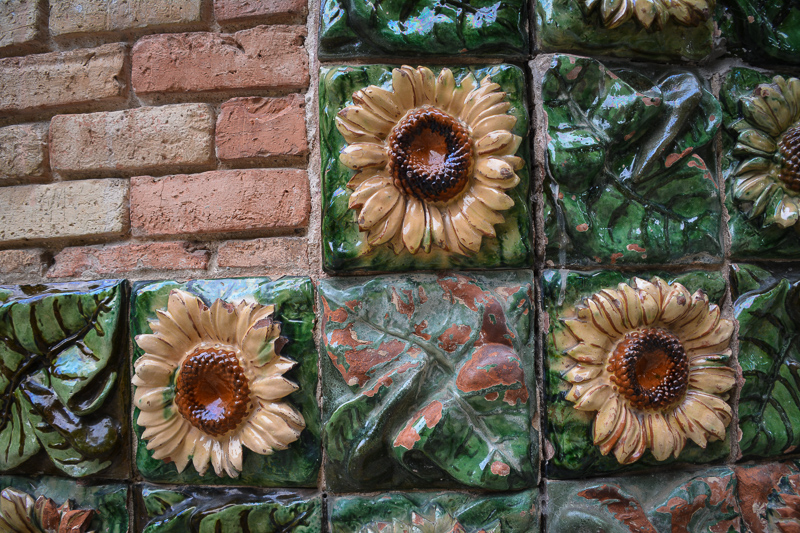 A Visit to the Sunflower House in Comillas

We are on a road trip around Spain, and when we arrive in Cantabria we decide that it’s a good idea to introduce the kids to the works of Antoni Gaudí. He is, after all, one of the most prominent Spaniards and a genius in his field. We buy tickets and receive maps and pamphlets in English, then we walk up to the house in the shadow of old chestnut trees. El Capricho awaits us at the end of the short path, a stunning butterfly of a building with its colourful tiles, glazed roofs und round shapes. The children are immediately intrigued.

Indeed, the best part of the house is its exterior. Sunflower tiles alternate with warm bricks. Cast iron balconies accentuate the forms, add a delightful playfulness to the design. The round tower in one corner of El Capricho resembles a Moorish minaret. It is right above the corner entrance which continues the circular shape of the tower. We enter the villa from here to explore also the insides.

The interior of the house is empty – furniture of the previous owner long gone. Still, there are a few highlights that we can admire. The emptiness of the rooms bring out the unusual shapes of the building. The floorplan of El Capricho is shaped like an “U” with a conservatory in its centre. Quijano had a passion for botany, and having flowers and plants all year round in the centre of his house must have been very important to him. 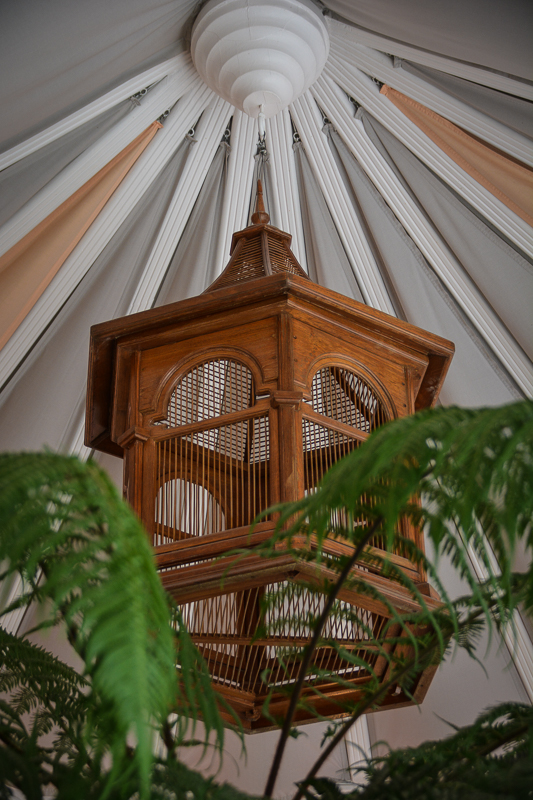 A Bespoke Home for a Solicitor who had Returned From Cuba

The children explore the house in their own time, following their own agenda. We ask them to sit in one of the balconies for an impromptu photo session – the balconies come with in-built benches and make great photo opportunities. We take the narrow winding stairs to the upper story and find here an attic with surprising symmetry. An exhibition shows Gaudís furniture design – fantastical, organic, appealing.

The gardens of El Capricho are small but harmonic. We discover a human-made cave as a playful addition to the garden design, then follow an elevated path along the perimeter which allows new perspectives of the house. A statue of Gaudí is sitting on one of the benches, the head proudly raised to look at his architectonic piece of art in front of him.

We agree that Gaudí had good reasons to be proud of his achievement here in Comillas. Even though El Capricho is considered one of his early works and is still missing some of his signature designs of later years, you can nevertheless see the artist’s mark even with layman’s eyes. A great destination for a short trip when staying in the Cantabria region of Spain, in particular, if you are interested in Spanish Modernism. 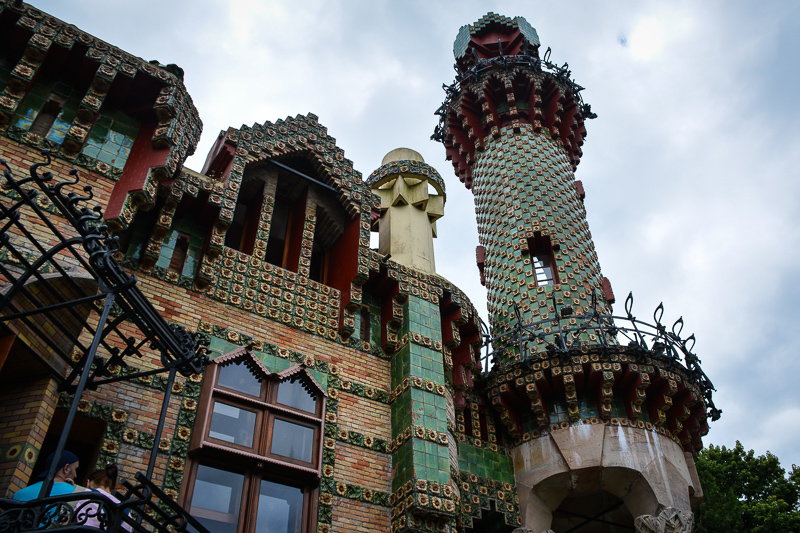 The fee for adults is EUR 5,00. Children enjoy a 50% discount, and younger children under the age of 7 go free. The building is open daily, though in the off-season the opening hours are shortened (see website for full information). You don’t need to pre-book your tickets. Comillas was the capital of Spain for one day (on August 8th, 1881) and has a beautiful historic centre with quite a few mansions and charming old buildings. The neo-gothic palace which today houses the university is the domineering feature of the cityscape.

The truth behind Santillana del Mar

A Cathedral of the Sea: Praia das Catedrais 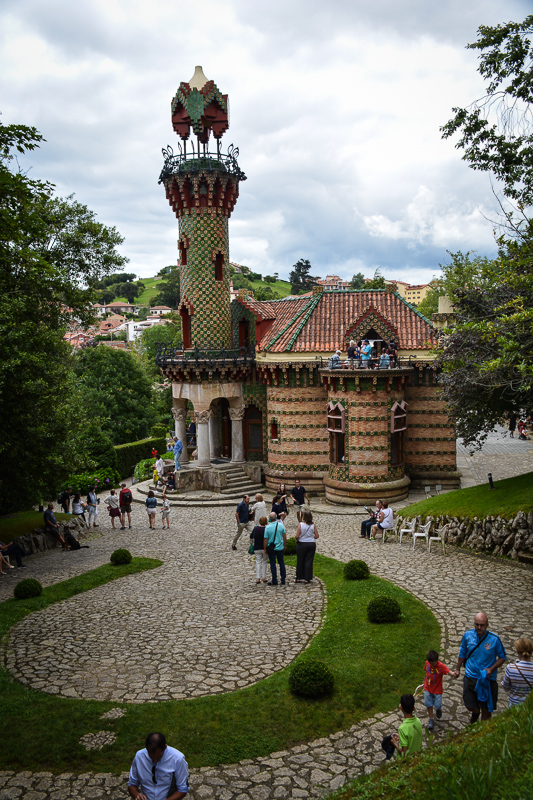 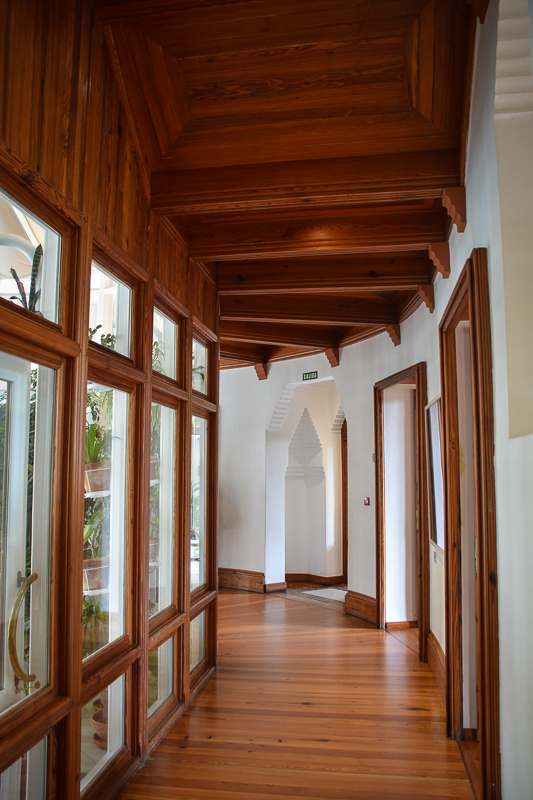 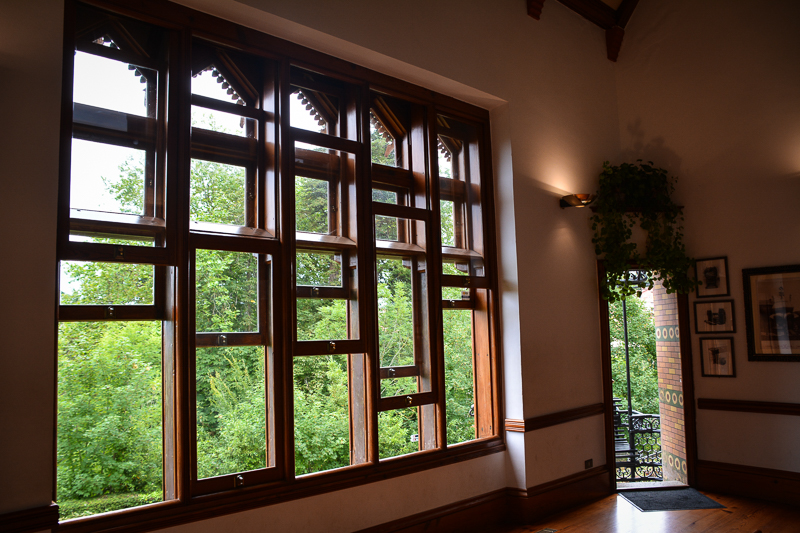 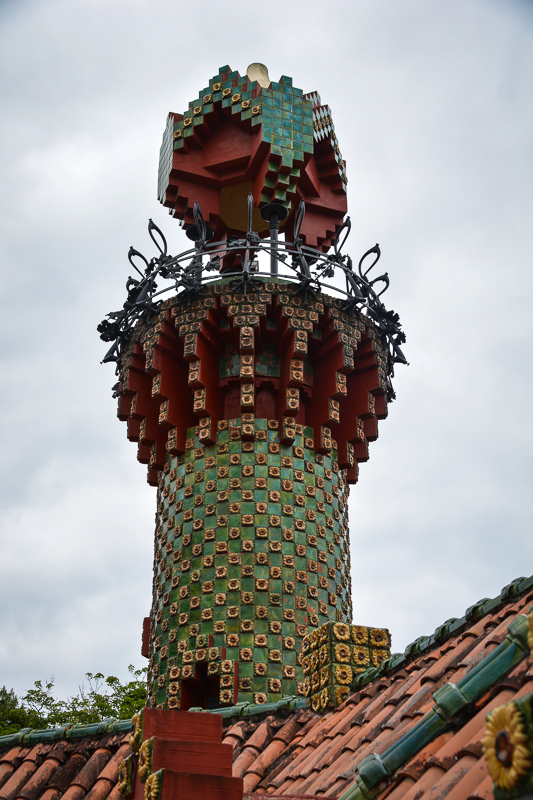 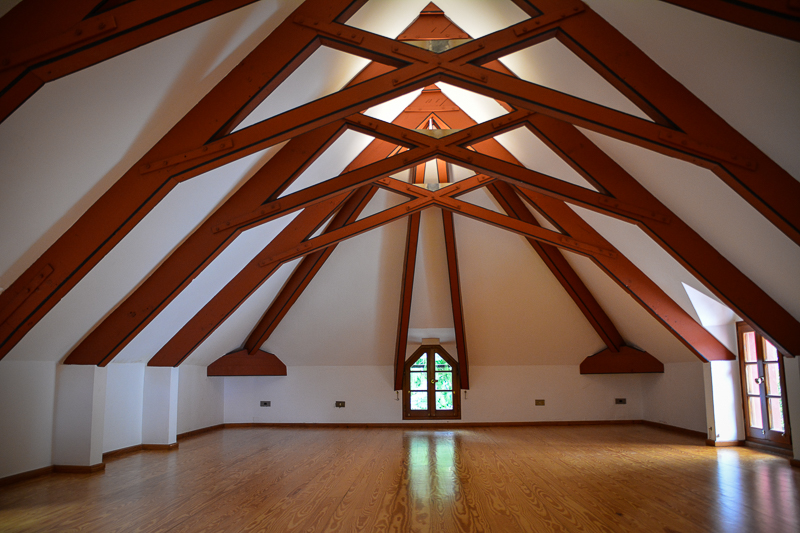 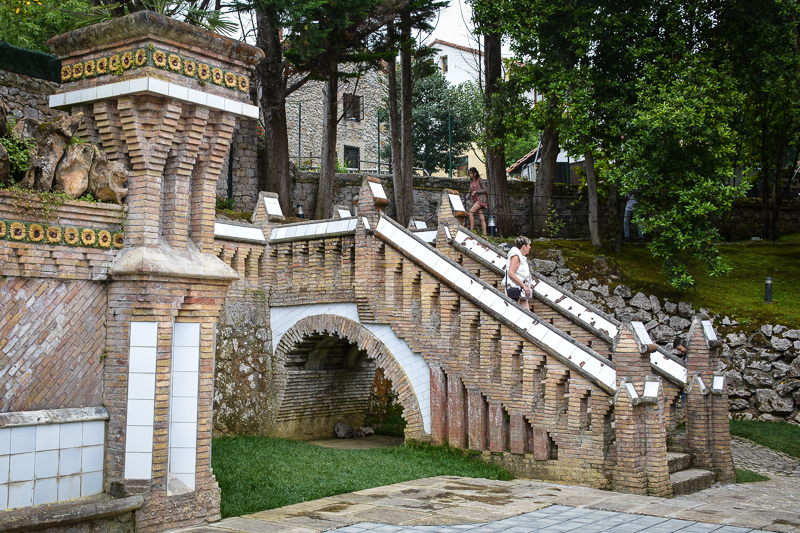 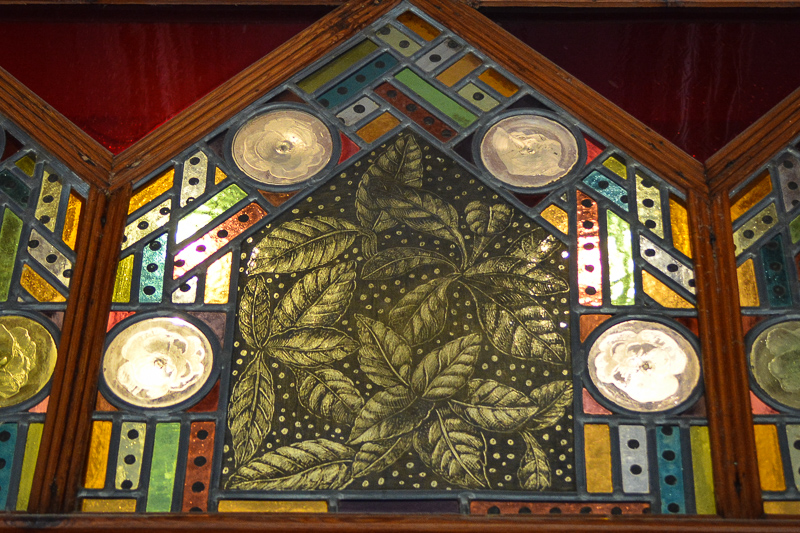 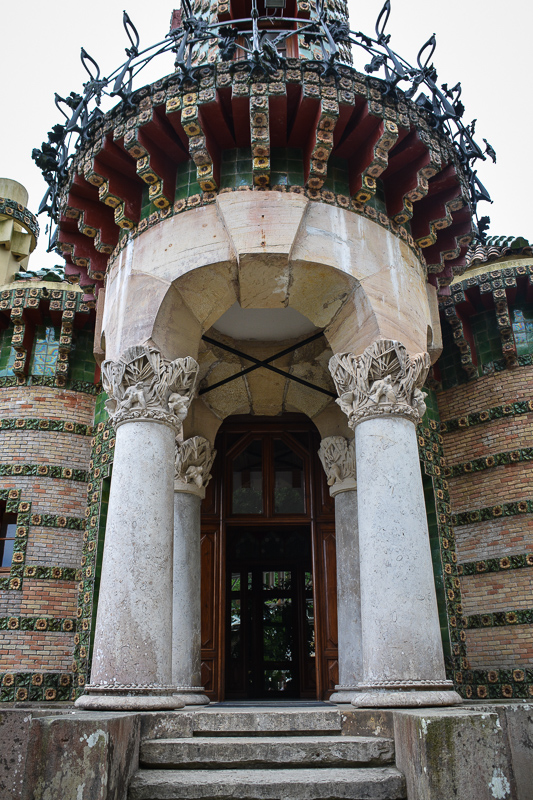 Virtual Reality Cocktails at The Lobby Bar, One Aldwych London