San Juan de Gaztelugatxe on the Spanish Basque Coast is one of the most spectacular Game of Thrones Filming Locations. In the show, it represents Dragonstone, home of the Targaryen dynasty. We visited this stunning chapel and share our experiences below. Read also in this post everything you need to know about visiting San Juan de Gaztelugatxe and how to prepare for your trip. 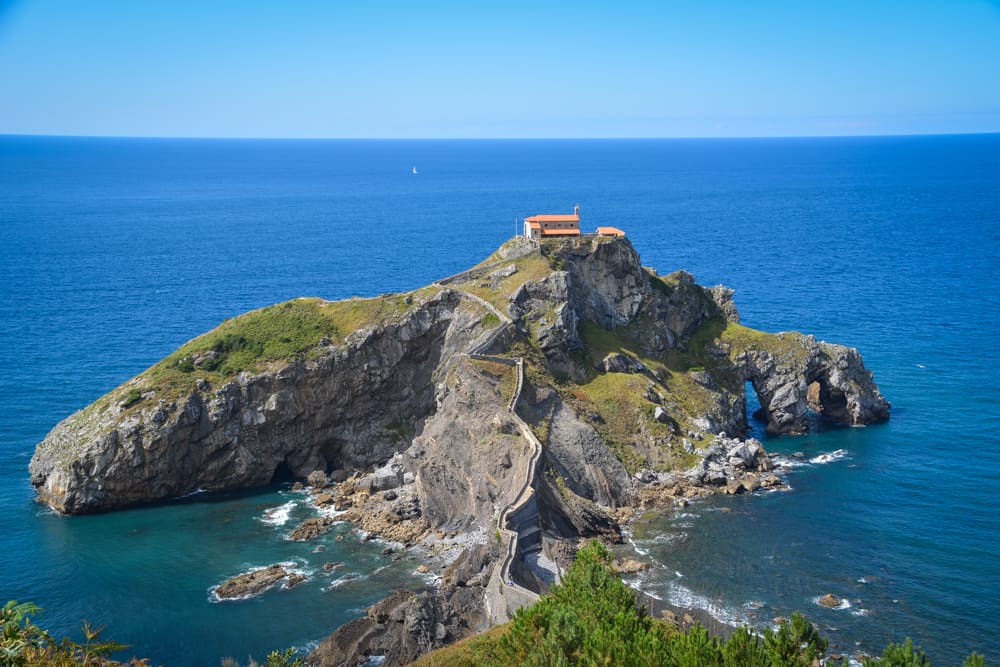 A stunning view from the lookout onto San Juan de Gaztelugatxe.

The hermitage on a rocky outcrop

I usually do not specifically seek out Game of Thrones locations when travelling. I’d rather look for spectacular places, not unlike what the locations scouts do. So when we stumbled on the hermitage of San Juan de Gaztelugatxe on the Spanish Basque coast a couple of days ago we were already won over. When we then read for our research that San Juan de Gaztelugatxe was to be featured in the upcoming season of GoT we were over the moon, knowing the producers’ good taste in locations.

San Juan de Gaztelugatxe is a place that has been in use for more than a thousand years. The hermitage was a donation by a local lord, Iñigo López, to the monastery of San Juan de la Peña which in itself has some interesting stories to tell (apparently the Holy Grail was stored in San Juan de la Peña for safekeeping from Moorish invaders on the Iberian peninsula, so there is a bit of a Templar connection here too). 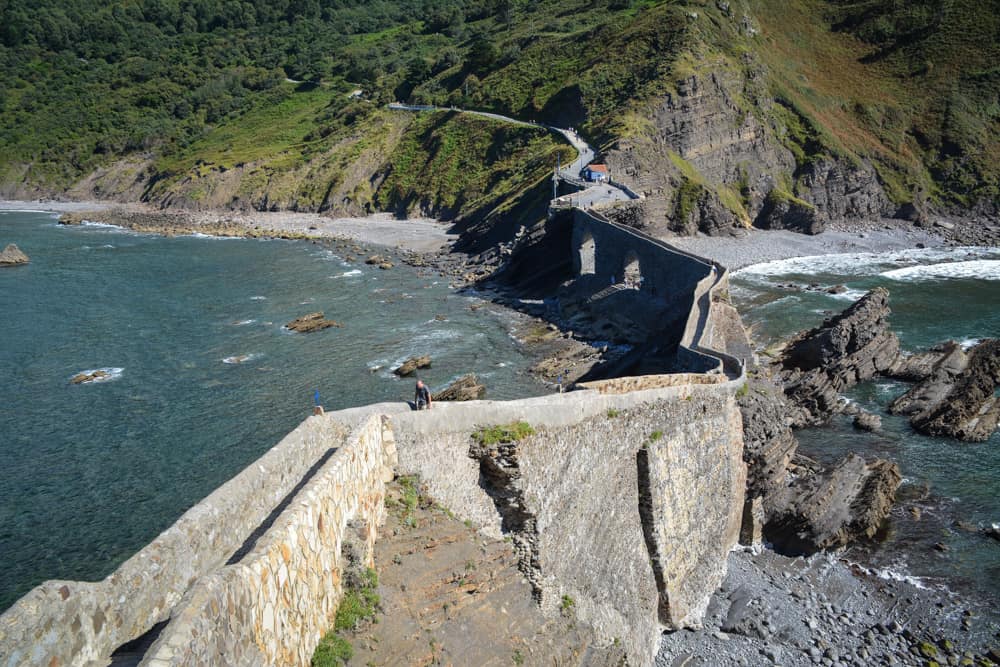 Crossing the bridge to the island is a spectacular experience.

Medieval graves have been found in the area, a sign that monks have really made use of the secluded location 80 metres above sea level.

Over the centuries, the hermitage has not only seen peaceful times despite its seclusion. The strategic location in the centre of a rough and dangerous coast meant that different people have successfully captured the island over and over again to use it for their specific purposes. Francis Drake has been here at one stage – throwing the hermit over the cliff, and the Huguenots left their mark too. English troops launched an assault in the 18th century, and the Spanish Civil War knocked on its doors as well. 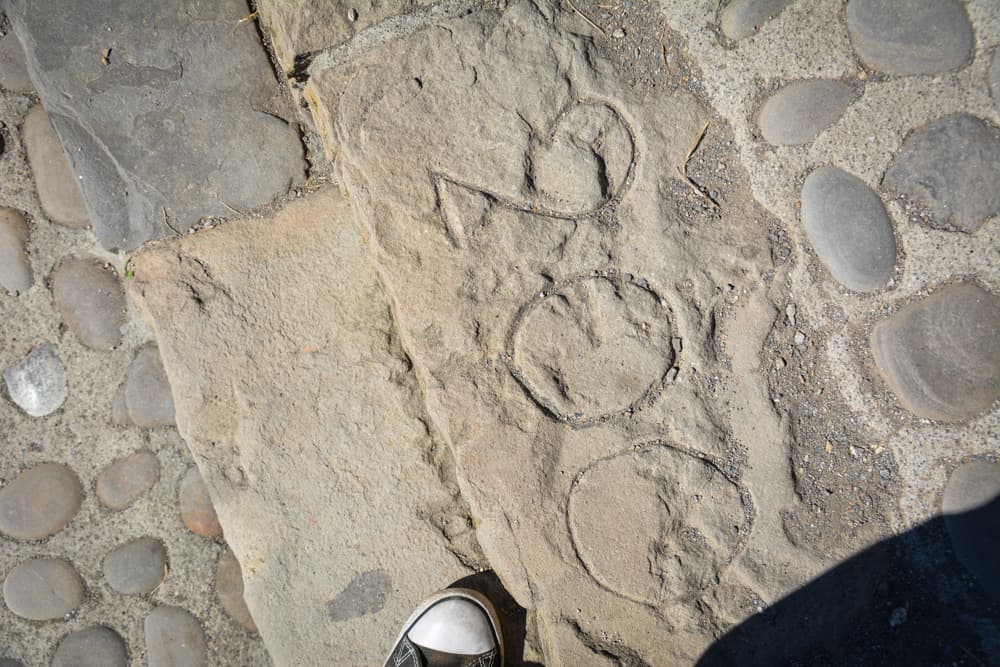 Encouraging numbers on the stone steps. Only 40 more to go!

You may wonder what the location is being used for in the upcoming season? Shooting has apparently been done in autumn to add a more wintery feel to the scenery. To be honest, I have no clue when or how the site will be used but I am keen to find out soon. Rumour has it that two key players will meet here for the first time – any suggestions?

In the end however it doesn’t really matter whether you are visiting a film star location or just a monastery. There are many equally spectacular places around the world and we shouldn’t wait for a TV show to come along and point them out for us. 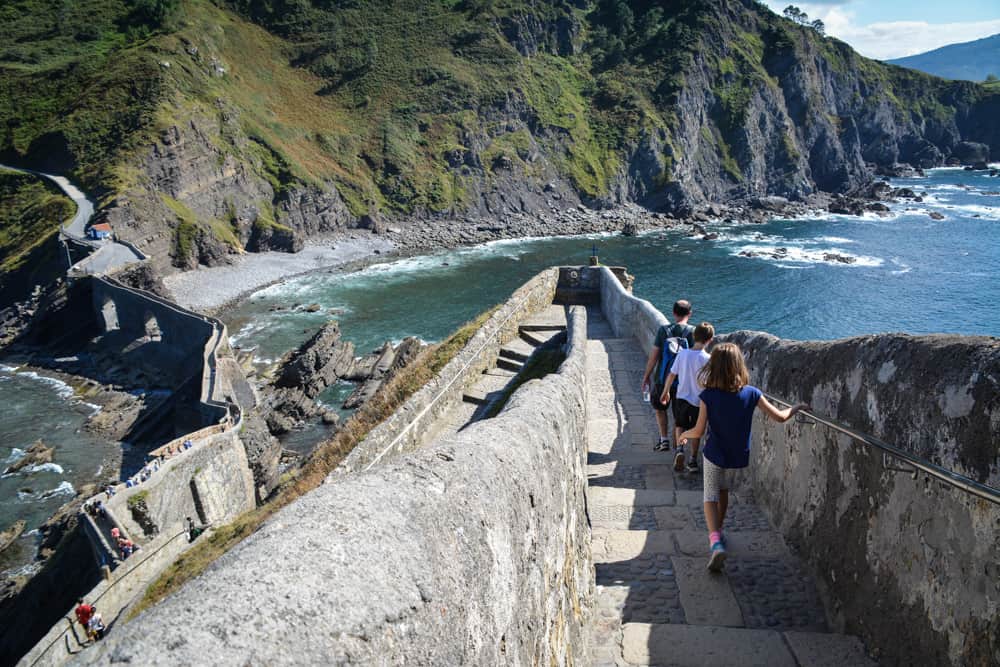 The stairs that wind down to the sea are following a fantastic zig-zag pattern.

Even without the added Hollywood bonus, San Juan de Gaztelugatxe is a place that is well worth the effort and the time spent there. An unforgettable experience and, as I said to my ten-year old son yesterday while visiting, one of the best places you will ever see in your life. The photos really don’t do it justice.

Add to the spectacular beauty of the rough and rugged coastline the smell of the sea and the cries of the seagulls. The thunder of the waves as they wash over the pebble beaches and into the arched sea caves on the base of the island. The faint ringing of the bell echoing across the sea over and over again. The 360 degree experience that rewards your every step as you labour up the stairs to your final destination. 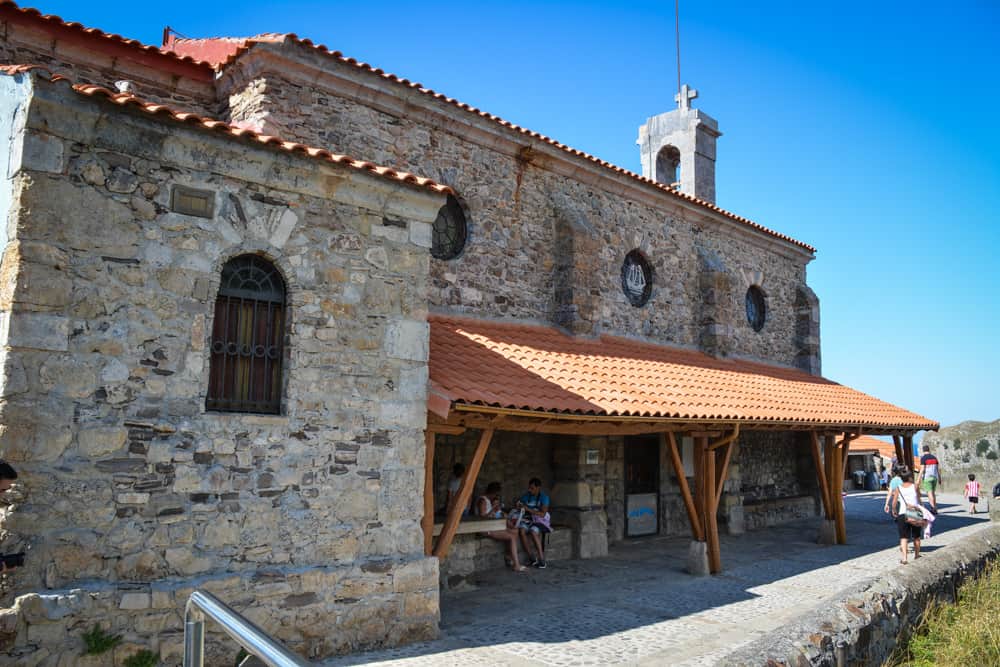 The church on top is modern and contains votives of surviving shipwrecked sailors.

The little church on top is nice to see but not your real goal. It has been burned down a couple of times over the last centuries, so what you will find is a modern chapel filled with curiosities. Shipwrecked sailors have left behind votives to thank God for their survival. There are model ships hanging from the ceiling and a propeller on the wall behind the altar.

A visit must be concluded with a ringing of the church bell three times – it is said to bring good luck and you can make a wish.

How to get to San Juan de Gaztelugatxe

San Juan de Gaztelugatxe is located between the towns of Bakio and Bermeo on the Basque Coast of Spain. The closest bigger city is Bilbao – it will take you about 50 minutes by car to get there. It is possible to take public transport to the site, however it is not really advisable. You must take the bus A3518 from Bilbao Plaza Moyúa square to Bakio town centre, then take a taxi to the carpark or hike 6km uphill to the starting point. The bus takes 40 minutes and runs every hour on the half hour.

There are a couple of things you need to know before visiting San Juan de Gaztelugatxe. It is a fantastic spot to visit for the day, even with children, but is does not come without a couple of challenges. 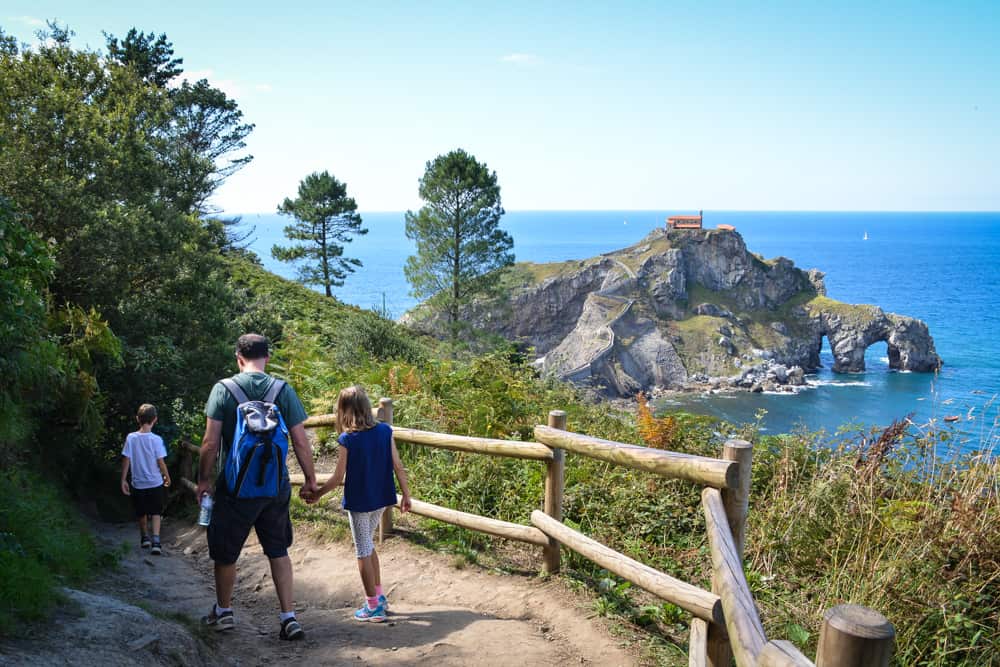 The path to the water is tricky but can be managed even with children.

Things you need to know before you visit

You do need to have a reasonable degree of fitness to climb down to the water line and up again to the hermitage. While the 230-240 (nobody knows for sure) steps up the outcrop are in very good condition and come with handrails for the most part, it is the first bit that is really challenging for visitors. The path leading from the carpark to the beach is steep, filled with lose pebbles and sharp rocks. It’s easy to twist your ankle here or to lose your footing if you are not careful enough. Good shoes, not flip-flops, are definitely needed.

Allow 30 minutes at least one way to get to the hermitage. 30 minutes back as it will be a steep ascent back to the carpark. After 5 minutes there is a small lookout point for taking pictures. If you know that you won’t be able to make it all the way this is already a good enough deal for most. Take sun protection and some water. Don’t count on the public toilets on the way, it is recommended you make use of the toilets as a guest of the restaurant near the carpark.

On 24th June the villagers from Bakio and Bermeo will walk to the hermitage to celebrate the feast of St John, so you may want to pick another date if you want to get spared the worst of the crowds.

Here’s the good news: The carpark is free, and so is entry to the site. With increasing popularity this may change, and parking may become an issue, so come prepared and check for latests conditions.

The Dubrovnik Game of Thrones locations 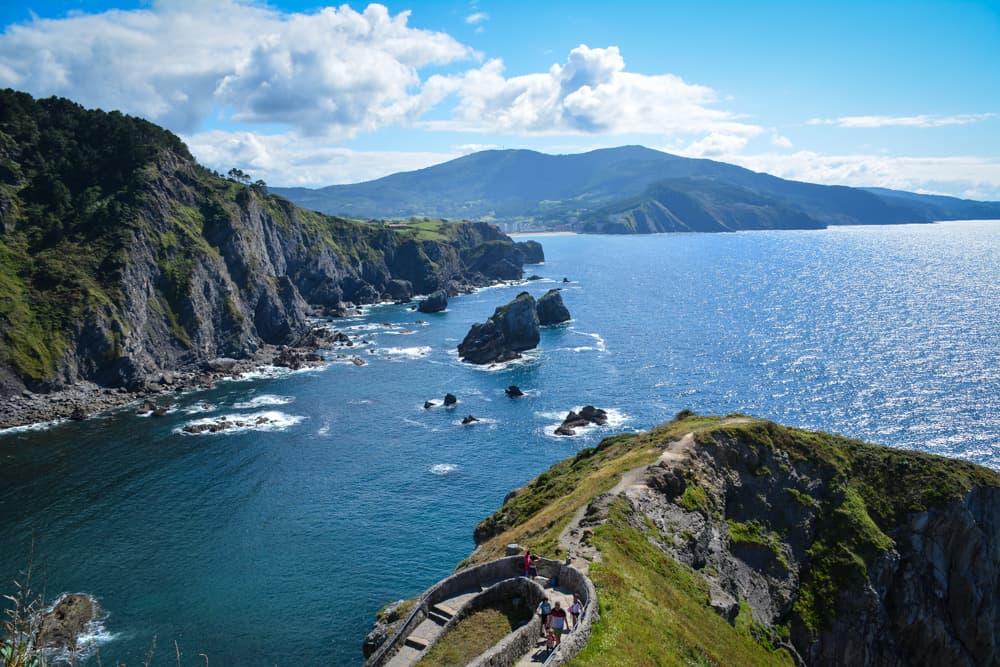 The spectacular scenery is well worth the effort.

Seville Cathedral: A church of superlatives

The Real Alcazar in Seville: Palaces of Dreams, Gardens of Pleasure