Che Guevara and the Irish Connection in Kilkee

Travel is indeed educating. And surprising at times. When I recently visited the small town of Kilkee in County Clare, Ireland I had no idea that there was a very unusual connection with one of the most iconic yet also most controversial figures of the 20th century, Che Guevara.

Yet, when our bus slowly drove through the sleepy streets of the small Irish seaside town, my gaze fell on a graffiti on one of the houses showing the portrait of the famous Cuban rebel. It was a bit of a surprise for me, not because it was the portrait of Che Guevara that I was looking at, but because you normally wouldn’t find street-art or graffitis in small Irish towns in the first place.

I filed the occurance away under ‘strange but not particularly noteworthy’ until we got off the bus for a stroll along the dramatic Cliffs of Kilkee. Unfortunately for us as well as for lovely Kilkee, it was a sad and grey day, dull with rain. All colours seemed to had been washed away. The houses lining the beachfront were pale, the skies were grey, the beach was a muddy brown. It was not the best day to see a town that could look so pretty under the blue skies on a summer’s day.

In the midst of all this dullness, however, there was one thing that jumped into my eyes. The portrait of Che Guevara on the seawall, painted in all colours of the rainbow. Happy and proud, like an exotic flower in a desert of nothingness. Here he was again, this famous rebel, creeping back into my consciousness from my lazy filing cabinet of faint memories.

Why was he here, and what did all of this mean?

Gazing into the Distance, Looking Defiant 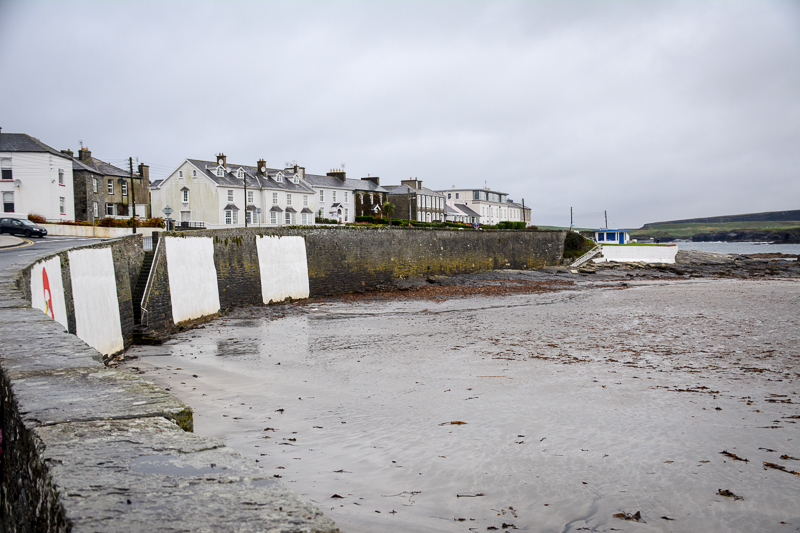 To understand the connection between Che Guevara and the Irish town of Kilkee on the Wild Atlantic Way, you had to go back to the 1960s. This was when the young Che suddenly burst into one of the local pubs in the town, the Royal Marine Hotel which was still in its original place 50 years later, to order an Irish drink. He was served a glass of whiskey by a young local lad, Jim Fitzpatrick, who immediately recognised his famous visitor and struck up a conversation with the rebel.

As it turned out, Che had been on his way from Cuba to Russia (or maybe vice versa), when thick fogs had him grounded at Shannon Airport. Curious about the country, he had taken off with two other men to explore the beautiful Irish countryside.

Jim Fitzpatrick was so impressed by the unexpected encounter with the famous revolutionary that he later on decided to draw a portrait of Che based on a famous photo by Alberto Korda. A portrait that could now be found all over the world, printed on t-shirts, tattooed on celebrities’ arms, and as it turned out, also on the seawall of Kilkee.

Just one of the Many Surprising Irish Family Histories 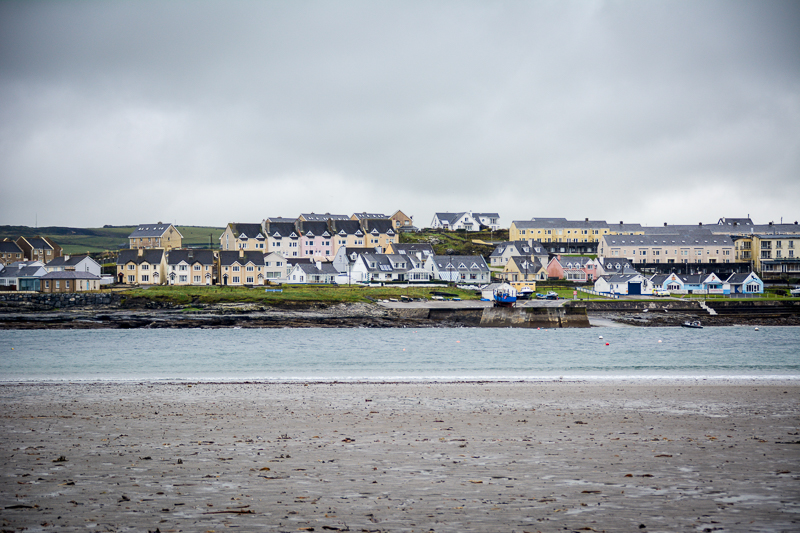 It was a little known fact that Che Guevara had Irish roots. Clearly, he was missing the red hair, so it was easy to dismiss any possible Irish connection. But indeed, his father had been an Irishman by the name of Guevara Lynch. Originally, his line of ancestors had come from Galway, where the Lynch family belonged to one of the county’s 14 tribes. The first person to leave Ireland had been Patrick Lynch who had become an influential landowner in Argentina. Che’s Spanish looks clearly had come from his mother’s side.

It was not unusual that famous people around the world had Irish roots some way of the other. In Ireland, I found many examples of where the Irish took ownership of a famous international person. Even American ex-president Barack Obama had Irish ancestors, believe it or not. When you stop at Barack Obama Plaza, a big service station on the M7 in County Offaly, you can read all about it at the free museum.

The Obama connection was widely celebrated, Obama was welcomed like a long lost son when he visited. The Irish aptly renamed the American president O’Bama, thus making him one of their own. 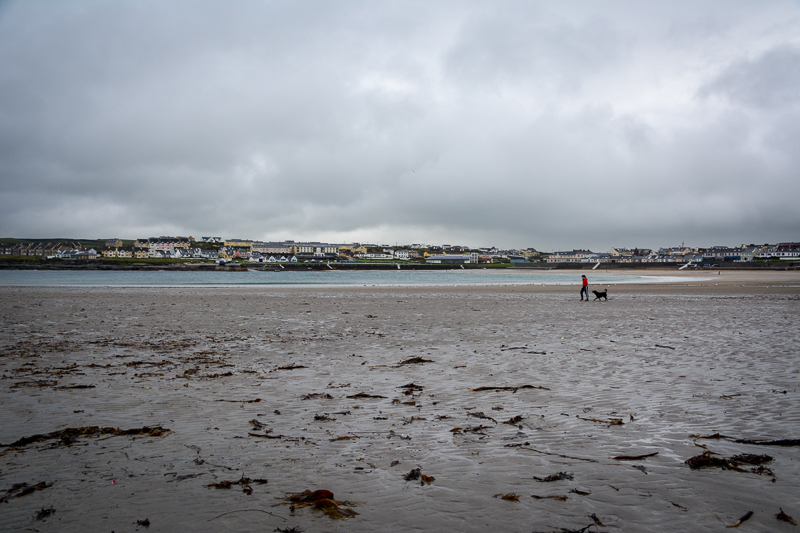 Opinions were still split when it came to answering the question whether Che Guevara had been just a young revolutionary who had been rebelling against the status quo or in fact a mass murderer. In Ireland, this topic had been hotly debated, also in connection with the Kilkee seawall.

After American tourists had complained openly about the depiction of Che Guevara on the seawall in Kilkee in 2013, the council swiftly covered up the mural with fresh paint to avoid further controversy. However, no matter how you stood when it came to the Cuban revolution, there was no denying that there was a strong connection between Che Guevara and the town of Kilkee.

After two years, the image re-appeared in the form of the 20-foot mural which we were seeing today. The council was keen to stress that it was meant as a symbol and as a reminder of the visit, not to provoke controversy. 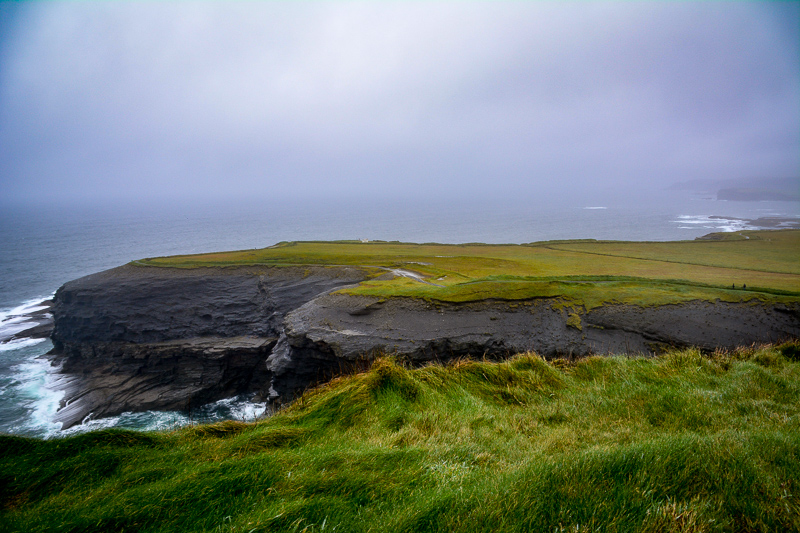 When you visit Kilkee, rain or shine, walk down to the beach. Have a look at the seawall, how proudly it now shows the picture of one of the most illustrious and controversial people of the 20th century. See how the bright colours are reflected in the shallow puddles on the sand. Study the iconic portrait: the way the gaze drifts off to a point somewhere in the distance, with eyes that seem to dream of a better future, whatever that may be. The determination and pride in the pose, symbolising the hope of a new generation.

I will not defend Che Guevara’s actions but I will say that I applaud Kilkee for taking a stance and leaving a mark. Che Guevara is more than just a political figure of the Cuban rebellion, he is also a symbol for the optimism of the younger generation, even today.

The mural on the seawall of Kilkee adds another aspect to the lovely seaside town. It starts a conversation, leaves a lasting impression.

When you are in the area, do pay a visit to see this iconic piece of art. When you are planning a trip to Kilkee, make it in September to have it coincide with the popular Che do Beatha Festival when the sights, sounds, food and drink of South America are celebrated to the max.

The Cliffs of Kilkee on a Broccoli Kind of Day