Chasing the dragon: How I survived Komodo Island

How I came to acquire such a title? You see, I visited Komodo Island to see the fabled Komodo Dragon and I survived to tell the story. You might think that this was an easy feat, but easy it is not at all. Because, as I learned a couple of days before I was due to visit Komodo Island, the dragons can smell blood. And if you are on your period this means that you are screwed.

An Unforgettable Trip by Boat from Flores Island

This is just one of the things that you will learn once you start looking into visiting Komodo Island, the very place where these fierce and ancient looking creatures live. I happened to visit Komodo and nearby Rinca Islands as part of a media famil which had been organised by the Indonesian Tourism Office. Both islands are located within the Komodo National Park, so if you want to visit yourself you will need to find your way down to the little port city of Labuan Bajo on Flores Island to charter a boat.

Komodo Island – the Home of the Komodo Dragon

We visited Komodo Island first, the better known of the two, but I will also tell you a little bit more about Rinca Island since the experience was quite different, as the photos will show you. Please do make sure you scroll all the way to the bottom for some amazing pictures of both islands. Komodo and Rinca are the only two islands left where Komodo Dragons can be found in the wild, so visiting these rare and endangered animals is quite a special experience.

Arriving at Komodo Island, I think we all felt a bit scared by the eerie and otherworldly atmosphere of the island. Despite the island being located in one of the most stunning locations in the world, the amazing Komodo National Park, it looked pretty much like death itself. Dry and dusty, with plenty of trees that looked rather dead to us, charcoal black earth, and then the oppressive heat to top it off. A scene that could have come directly out of a horror movie, in particular with the constant croaking of ravens in the background.

Were we scared? I think you could say we were alarmed and maybe a bit tense; even more so when we spotted our first dragon. A baby, just a hundred meters away, leisurely crossing one of the footpaths in the distance.

This is when it dawned on us that these dragons were ruling the island. We were mere visitors that were given temporary permission to visit. We swiftly found our way to the camp where we were greeted by courageous rangers who live on the island for extended periods of time.

A brief introduction followed, and we all agreed on the route. 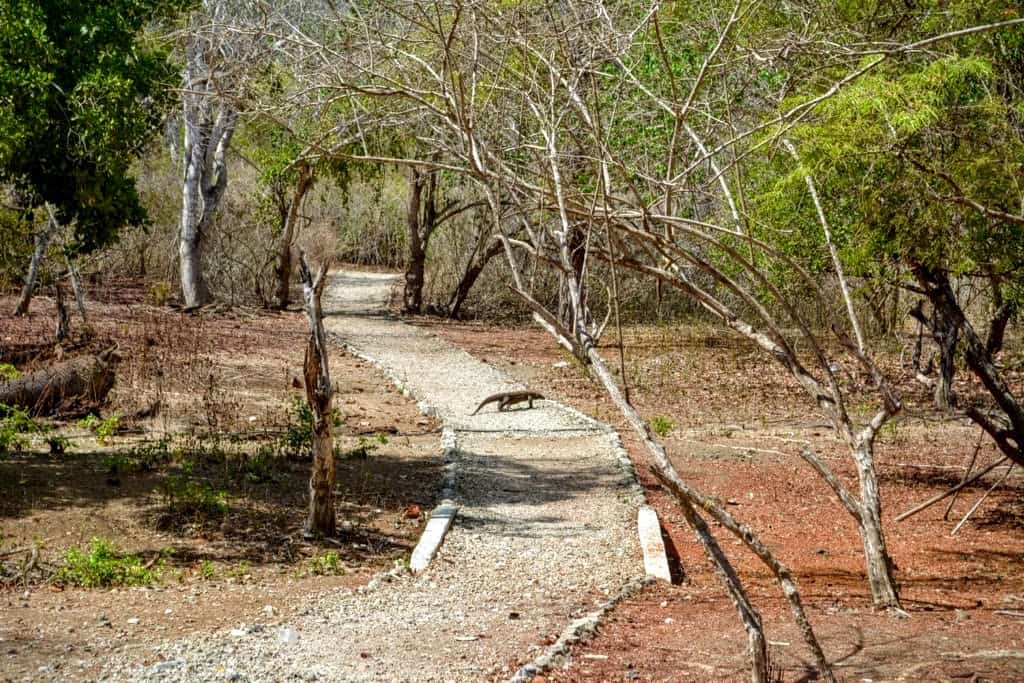 The Story of the Lost Tourist

There is one thing you need to remember when visiting Komodo Island: you need to stay close to your group. With a ranger in front and another behind us we set off on one of the tracks to explore the habitat of the Komodo Dragon.

Our only line of defence? A long stick which is used to keep the creatures at bay in the case of an attack. And this is no joke. One day a tourist failed to stay with the group. Apparently, he had fallen behind to tie his shoelaces or something silly like that. When the rangers started a search they never found the poor guy’s body, only his shoes and his camera.

So it’s wise to stay in the group and respect the aggressive nature of these wild animals.

Not a lot of Dragons but Lots of Bones and Deer

On Komodo Island we were trying everything we could to spot the dragons but all we did see were other animals that the dragons would feed on, mostly wild pigs and deer.

This is somewhat disappointing, perversely so, considering that under normal circumstances I would be happy to get so close to these wild living animals.

But it is dragons that we wanted to see, not their food. And so our only solace could be found in the fact that Komodo has some gorgeous views to offer from the top of the hill that we needed to climb on our walk.

After all this tension in the air, the croaking ravens and the suspicious gazes of the local deer we returned to camp, only to discover a massive dragon just lying around next to camp kitchen building. We were thrilled and started snapping away.

To our horror, however, we soon discovered that we actually overlooked a second dragon right next to that first one. And then someone pointed out another dragon, and another dragon.

Not that these had just joined, they had been there all the time. There were just camouflaged way better than what we expected. And so the alarm bells went off again, with cautious glances over our shoulders we somewhat respectfully continued taking pictures of these Jurassic looking animals.

As it turned out, Komodo Dragons do suffer from the heat just as much as us humans. So they prefer lazing around in the cooler, lower lying areas near the camp. With their tummies filled they couldn’t be bothered to pay us any special attention, and so we were able to take some amazing photos from the beasts before returning to the boat.

Rinca Island – the Other Home of the Dragons

It was on Rinca Island the next day that we learned some fun facts about the Komodo Dragon which I am more than happy to share. Rinca, by the way, presented itself a bit more friendly in its natural appeal. Sans croaking ravens, and with the added bonus of monkeys. And crocodiles – but who cares about crocodiles when you could potentially also be eaten by a real Komodo dragon?

We learned for example that dragon poo tells us quite a lot of stories. The prey is eaten whole and alive, so anything that comes out again after an incredibly long digestion period is truly indigestible. This includes the white bits which are dissolved bones and dark lumps (in the first poo after feeding) the hair of the eaten animal. After this revelation I looked at poo with a whole new set of eyes.

A Slow and Painful Death

Everybody knows that Komodo Dragons are poisonous. They don’t need to kill you because the bacteria in their mouths will take care of that for them. Yours will be a slow and painful death, and you will live every minute of it. The bacteria only builds up over time. So baby dragons will have to kill without them until they are around 3 or 4 years old.

The babies are also good climbers. They have to in order to survive their cannibalistic family members. As the rangers on Rinca told us, baby dragons do happen to climb through windows quite a lot. So imagine waking up and having one of them sitting on your chest! Not a pleasant place to live.

And just like on Komodo we did find the dragons snoozing around the camp kitchen. They were all fat and content and couldn’t care less about our presence. Only when something fell down through the kitchen floor, the ferocious snapping for food began. A show that lasted for about half a minute until inertia kicked in again.

During our walk on Rinca Island we were shown a lair where the females would hide their eggs. The mount looked a bit like Swiss cheese, with the females digging several decoy holes to discourage predators. Views, again, were outstanding once we were on top of a lookout.

And so we returned safe and sound to our boat, having not been eaten by any dragon, which means that I am now able to tell the tale.

For more info make sure you visit the official website of the Komodo National Park.

Looking for more Indonesia Travel Inspiration? Have a look here!

You may also want to check this out

5 beaches in Lombok that you don’t want to miss 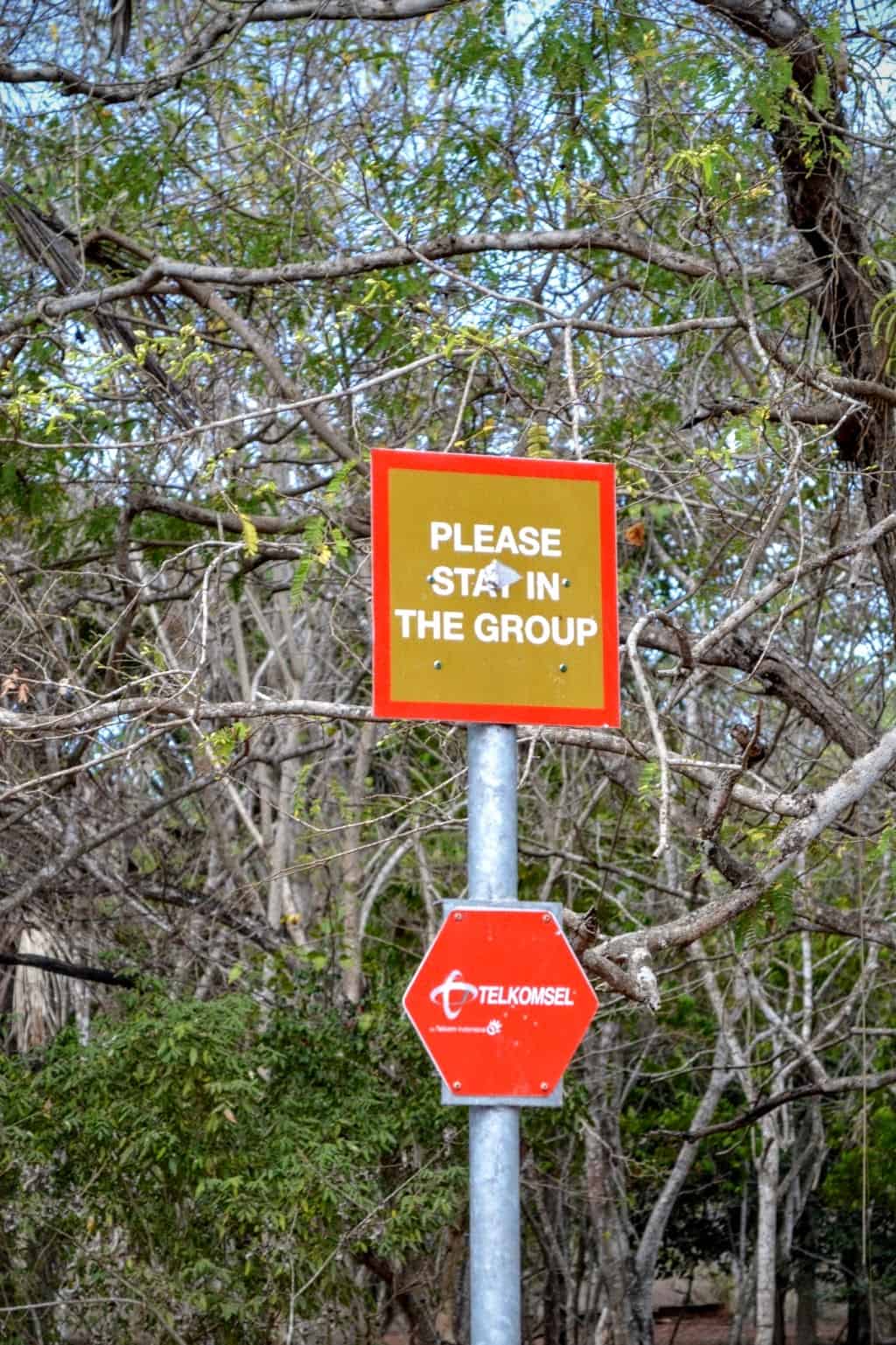 Why this is the best place to buy sarongs in Lombok