A village made of sugar cube houses, picturesque and alluring. Casares was one of these white villages in Andalusia you couldn’t resist. From the moment you arrived, swallowed up by the big free car park, your steps would take you quite automatically to the very end of the village, past century-old white houses that seemed to have been stacked on top of each other like sugar cubes.

Your visit would culminate in the ascent of the mountain where you would not only catch intimate glances of the village from above. There, in the distance, you could even see the rock of Gibraltar, hazy on the horizon, and – if you were lucky – some glimpses of the African coast.

The White Villages of Andalusia 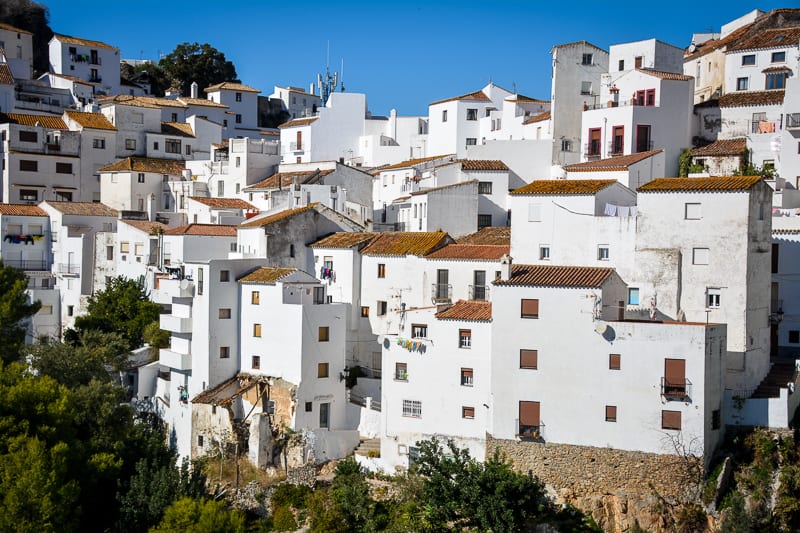 Our new home Andalusia was renown for its white villages. They were a surviving testament to the five hundred years of Moorish settlement in the region before most Muslims were expelled during the reconquista in the 15th century. The white colour of the houses was not by accident: this design was the cheapest way to keep the insides of the houses as cool as possible during the long, hot summer months.

Most white villages were set up in quite the same way – white houses huddled close together, hanging on the steep surfaces of a tall hill or mountain. On the top, there would be a castle, oftentimes from the Moorish past, sometimes in pristine condition but most times in a ruined state.

At least one church could be found too, sometimes in the centre of the village, sometimes next to the castle, replacing the old mosque that might have been there before. Sometimes, you could even find Roman or Phoenician traces of human habitation nearby.

But not every village was alike. Some were indeed more picturesque than others. Casares was an outstanding example, and you could see this before you even entered the village.

On our trip to the village we made a quick stop at a lookout on the hill just outside the modern police station. A spectacular view greeted us while we were standing under the iron cross, a sight to behold. 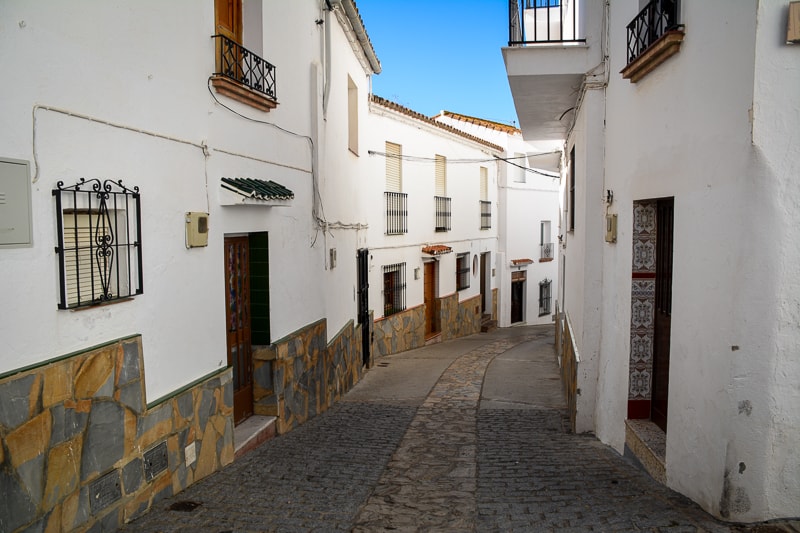 Rarely would a visit to an Andalusian white village be as efficient as our trip to Casares. The road from the south ended in an undercover car park and wouldn’t take us any further, even if we had tried. Parking was free, and a lift took us all the way up to the observation terrace and the town’s streets. From here, we enjoyed new views of the houses, less distant than before, and with more details to explore.

We followed the short Calle Fuente to reach the centre of Casares, the Plaza España with the fountain of Carlos III. Under magnolia trees we found a table in a small cafe, ordered cold snacks and drinks and soaked up the lively atmosphere of a wintery afternoon.

The locals had come out too, the grey-haired men standing on one side of the square chatting while the ladies were seated in the various bars and cafes on the other side. It seemed that things had always been run like this, men on one side, women on the other, with friendships and family bonds creating an underlying fabric that was keeping village life together.

For such a small place, there were quite a few noteworthy sights to see in Casares. It was the birthplace of Blas Infante, an important Andalusian politician who was murdered by the nationalists at the outbreak of the Spanish Civil War. If you were interested you could visit the house of his childhood and a dedicated museum.

There were also churches and an hermitage, as well as a myriad of tiny details along the old houses – windows that had disappeared over time, balconies built with the natural rock as a base, broken shutters in vivid colours. But we wanted to see more, so we left the town centre to walk up to the castle ruin.

From the top we saw Casares’s many secrets. The main square where we had been just a few minutes ago, with festive decorations put out in preparation for Christmas. We looked into houses that had lost their roofs a long time ago. Saw the dozens of birds of prey that were circling above the surrounding mountains, always on the lookout for food.

To the east, we saw a line of windmills, and behind that Gibraltar (for tips on what to see in Gibraltar, click here!). It was a sheer drop from here, the place where rebellious Moors had been pushed to their death.

We explored the ruined castle that was overlooking the town, where big holes in the old walls made for interesting photo opportunities with the children. Peeked through the gate into the pretty Spanish cemetery where the dead were put to rest in urns that were placed in wall niches. Studied the geometrical patterns on the walls of the towering Iglesia de la Encarnación.

The Roman Baths of Hedionda

It was an easy walk back to our car, through the ancient gate with the machicolation to fend off intruders. There was one last thing we wanted to see before we returned home. A little secret place that not a lot of people knew about. Not easy to reach and hard to find if you didn’t know where to look.

Technically, the Roman Baths of Hedionda were part of the Casares experience, but it was a good 20 minute drive to get there from the village. In the shadow of the motorway viaduct we took a turn down a bumpy country road and parked in the grassed parking before it was another 10 minutes walk along the side of a river and past an abandoned thermal clinic.

The sulphur smell was striking, the water warm and blue. The thermal springs of Hedionda had been loved by the Romans who had built a bath around the river to create a pool to swim in. In modern times, a concrete roof had been added, which made the swim in the cavernous pool more of a dare, but many people simply liked to stand barefoot in the shallows of the gurgling stream, pressing hands in the soft mud on the opposite bank. In summer, the baths of Hedionda were busy with locals, but now in winter we had the place almost to ourselves.

From the sugar cube houses to the views to Gibraltar, from the ancient city streets where the villagers would meet for a chat, Casares gave us a rounded Andalusian experience. It was the perfect place to explore with the children, the variety of sights and sounds offering just the right mix to keep the children entertained. One of our most favourite villages in Andalusia, perfect for a day out.

More photos as you scroll down… Did you like this post? Leave your mark by clicking or tapping the heart on the top of the article! ↑

Andalusia Travel Guide – Everything you Need to Know 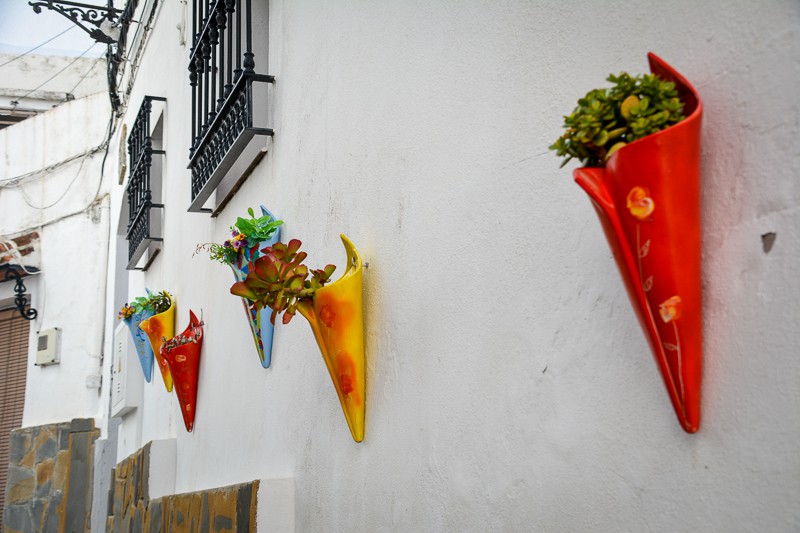 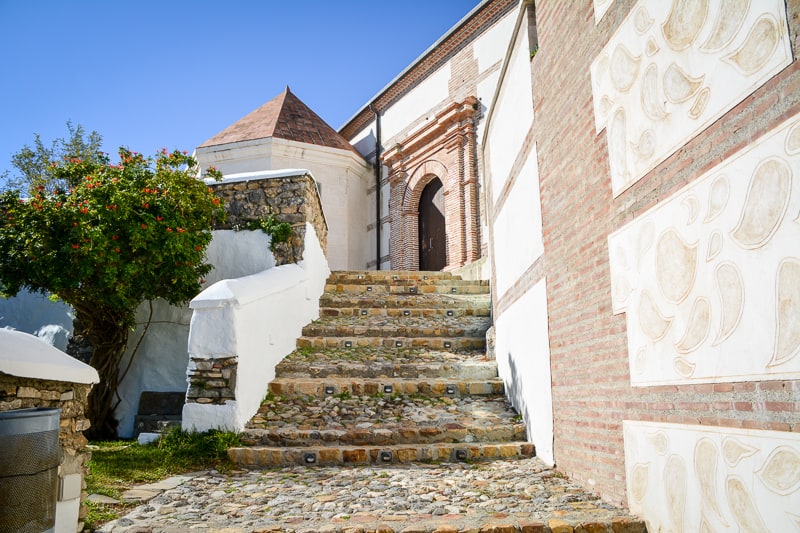 Girona: When the City Comes out to Play at Night