My attempted escape to a white village named Mijas

Every once in a while I need to escape. I need to leave behind the everyday and find some new places. Recharge my batteries for those days when nothing seems to go according to plan or when my petty little worries seem to have the upper hand. In those cases and on those days, I close the door behind me and go to a new place that I haven’t seen before.

Sounds familiar? Are you an escapist as well? Well, I can tell you that in my case I am pretty lucky as my escapism is currently not very costly at all. Since I have moved to a new country, Spain, many things around me are new and interesting and exciting. I do not need to venture far to forget about my everyday woes and struggles.

Just a couple of weeks ago I was exactly in this kind of mood. The kind of feeling where nothing seems to work and where all you want is a sea change and some new vistas and a bucketful of surprises. And so I hopped into the car with my husband and we drove up the road and straight into the mountains.

Our destination: The little Andalusian village of Mijas.

Some interesting souvenirs, not just the cheap stuff.

The white village in the mountains of the Costa del Sol

When I say Mijas I am speaking of course of the white village that you can see from coastal town Fuengirola and beyond. It is situated on the mountainside, a spread of white-washed houses that couldn’t be more picture-perfect even if they tried. Do no confuse Mijas Pueblo with the other Mijases around – those are much more urban and less romantic than the village in the mountain.

Even though the village looks very traditional at first sight, don’t be fooled. Mijas survives mainly on tourism.

It’s a curse and a blessing at the same time. While the streets and houses are pretty and well-maintained, some of the authenticity and tradition got lost in the process. To us, Mijas didn’t quite look like a town to live in but rather like an artificial resort. It was fitted with all the stereotypical features that you would expect from an Andalusian white village. I think this becomes most evident in the pompous town hall. It is built in the traditional Andalusian style but with all the bells and whistles, so to speak.

Under the fresh coat of paint, however, there is a lot of history in Mijas. The area was already inhabited in pre-historic times and many different tribes and cultures would follow. The Romans and the Phoenicians would find a home here. Later the Visigoths settled on the slopes that faced the coast.

When the Moors conquered Spain, they allowed the Christian villagers to continue on with their lives, provided they would pay high fees for the privilege. The Moors called the villages Tamisa – and from here the name slowly changed into Mijas. If you find the word “Tamisa” written on restaurant or street signs, here’s why.

Remains of these cultures can also be found in the architectural style of the buildings. The white houses, so typical for the south of Spain, dominate the townscape. There are also traces of ruins in the fortifications surrounding the area that date back some 2,000 years. In contrast, the watch towers are of a much younger age, as they were built in the 19th century as a way to fend off the re-occurring pirate attacks from the sea.

An escape to Mijas

We park the car at the beginning of the town near a hotel named Trh Mijas. There is free parking here on an unsealed parking lot, tucked away in a cul-de-sac. We leave the car behind and follow the main street that runs parallel with the mountainside, the Avenida de Méjico. This is the main road leading into the village, and as we walk further and further the houses become older in style, the lot sizes smaller, the road narrower.

Behind the Plaza de la Paz the road gives priority to pedestrians. The houses are standing close together now, there would almost no space for a car anyway. They are two storeys high, with the typical barren front of Moorish style buildings. Closed shutters, barred windows, strong wooden doors.

A bar entrance in Mijas.

We come past a number of shops and restaurants. They sell locally produced artisan work, not so tacky souvenirs, expensive fashion. By now we have realised that Mijas is not just a simple tourist resort. It is meant to attract a certain class of visitor, the one with deep pockets.

It is hard to believe that the first telephone line to Mijas was only installed around 60 years ago. Before that, and before tourism brought money and opportunity to the Costa del Sol, many villagers were vulnerable to hunger and poverty. There was not much money to be made in the area. Most families relied on farming, logging and herding cattle.

If you think about it, the development that happened to Mijas within the time frame of a generation or two really is quite impressive.

Panoramic view over the roofs of the village.

The charming core of the village

Following this road eventually brings us to the more charming and authentic parts of the town. An area that hasn’t been sold out to tourism yet. Near the Plaza de Toros we hang out under the shady pine trees and watch the people go by.

There is a Catholic church here, the Iglesia de la Inmaculada Concepcíon. The remarkable bell tower is a recycled fortress tower of the Moorish castle that used to occupy this space. We have no opportunity to go inside, but that’s ok given that Mijas is just up the road from where we live now, so we will be back.

Not far from here there is also the bull ring. I am not going to touch on the discussion of the ethics of bull fights in Spain. Let’s just look at it as what it is. An usually shaped building with fantastic announcement posters on the outside. Letters written in giant tiles. Blue pots of geraniums. Even from the outside we can make out the seating areas for the audience, the raised seat of honour for “El presidente” and the exit doors for the shade and sun-soaked sides of the arena.

Further on, from the edge of the terrace, we take in the stunning panoramic views of the coast. The air is sweltering, while the moisture sits heavily over the country side. It’s a glorious view. This alone is enough to reward you for the trip up to Mijas.

To the other side we can make out the towering mountains of the Sierra de Mijas, picturesque with their perfectly shaped trees that sprinkle the slopes like artfully placed accents.

If you don’t pay attention you will almost miss it: There is a small church somewhere mid-way up to the peaks. The Shrine of Calvario was a place of contemplation of the Carmelite monks. We have been told that you can walk all the way up there from the village. You just need to follow the trail that is marked with iron crosses.

It looks like another great way to escape the crowds and the commercialised centre of the town without compromising on the experience of visiting this beautiful place.

You may also find this interesting

On the pursuit of the rabbit – a day in the Alpujarras

Andalusia Travel Guide – Everything you Need to Know Before you Visit 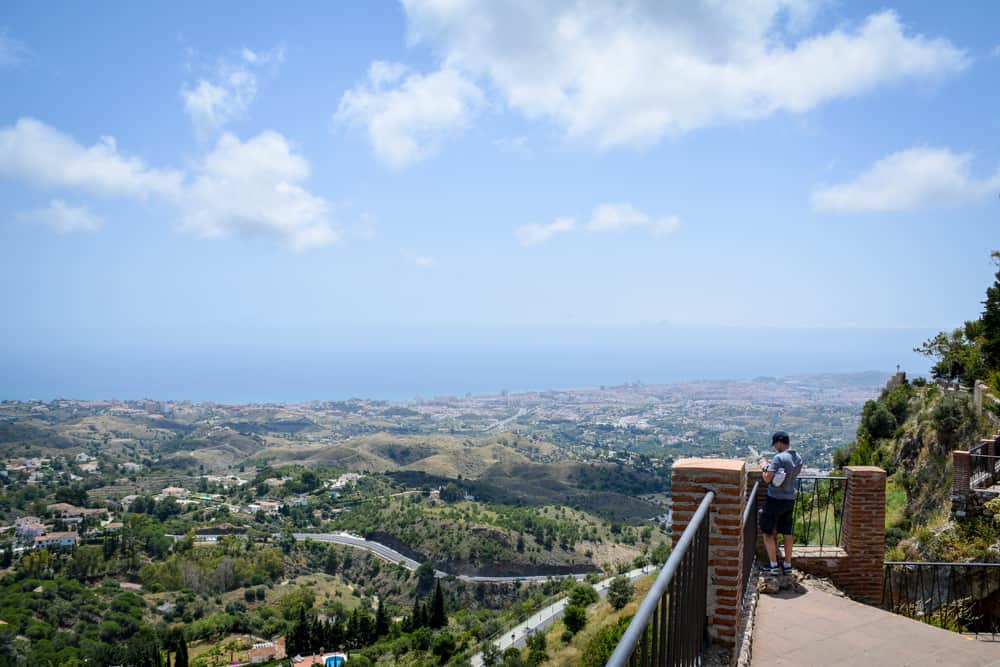 The views all the way to the coast.

From here we descend down to the Plaza de la Constitucíon, a small pretty square that is unfortunately under construction when we visit. From here it’s just a couple of metres to the Plaza Virgen de la Peña, a wide, open space with a park in the middle and parking spaces all around. This is the modern centre of Mijas, the one where you will find the cute but cruel donkey taxis, the pompous town hall and the oversized tourism office.

There are nice views from here too, but despite all the prettiness this is the kind of place where you feel compelled to watch your wallet. It’s not that anything happens to us while we visit. Nobody approaches us, and there are no visible signs of petty crime. But it’s this kind of place that is overloaded with tourists that prefer to stay in the safe confines of a well presented environment.

At the end of the day, we do manage to get out and have our adventure for the day. Don’t get me wrong, Mijas is a nice place to visit. It definitely has a lot going for it. There’s the cobblestone streets and the white-washed houses. Old buildings from various centuries and the panoramic views to the sea.

But it is also a village that has whole-heartedly embraced tourism to a point that it is not much more than a parody of itself.

We have seen many other villages in Andalusia, most of them with moderate to low tourism. It might be my personal preference, but these villages still have some authenticity. There’s chipping paint and lose hanging cables, a slower pace and broken window panes. We do like these places better than a village like Mijas.

For an escape attempt, Mijas was a fine choice. To discover the true heart and soul of Andalusia we suggest you go somewhere else. 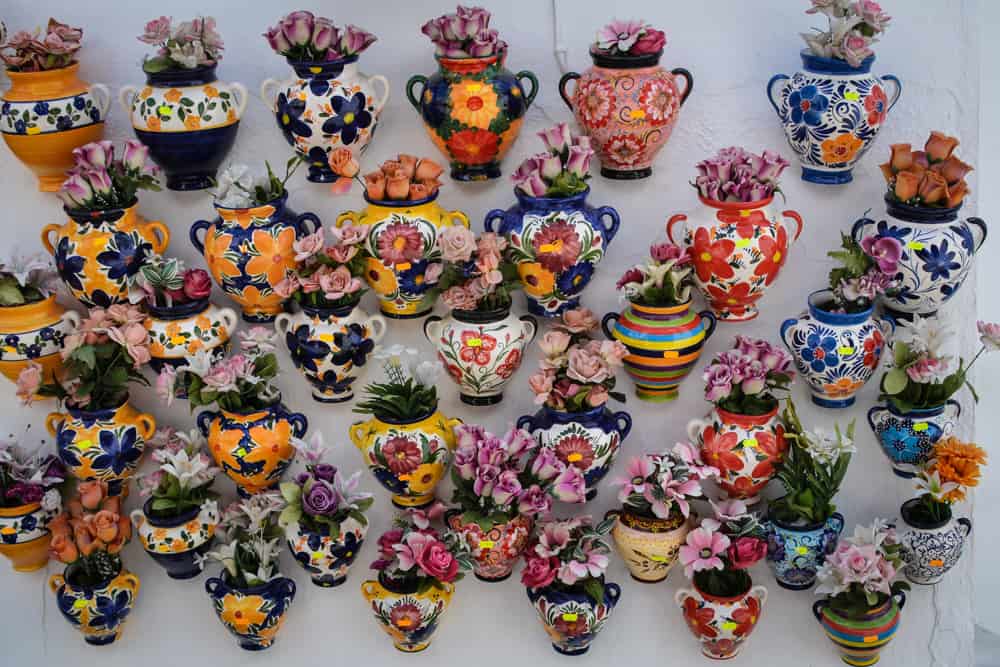 Colourful pots and flowers for sale.

Trademark blue pots with red geraniums can be seen everywhere. 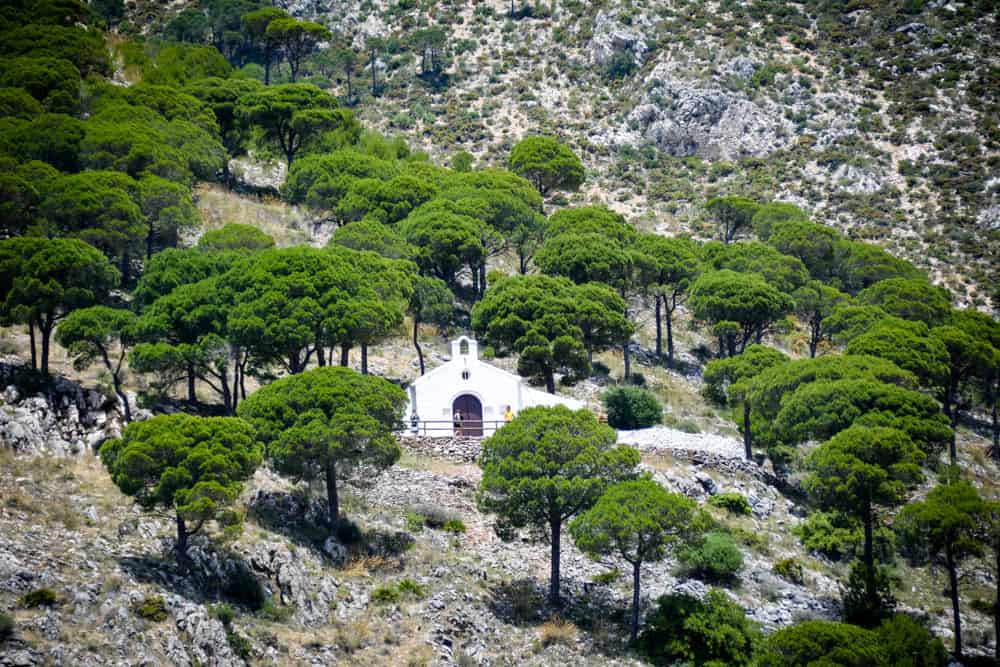 Way to the Museo Taurino.

Top Tips to Help You Plan a Stress-Free Trip