A Visit to the DDR Museum in Berlin

Our visit to the DDR Museum Berlin really touched me personally. You see, I was only 11 years old when it happened but I still can remember it very clearly. The Wall of Berlin came down and with it a whole system that controlled the lives of millions of people.

I grew up in West Germany, and even though we didn’t have immediate family in East Germany, I was donating jeans and Barbie dolls to unknown children, friends of friends, on a regular basis. No questions asked, it was just something that you did when you grew up in the West.

As a child, I had no understanding of what it meant to live on the other side of the inner-German border. The complex structures and systems that led to a state where people were not allowed to travel, couldn’t pick their desired career path, or wouldn’t find bananas in the stores, were a sad fact but nothing I would seriously question.

A Visit to the GDR With my Children

Things are different now. I wanted to learn more about this other Germany that was now long gone. I was wondering what childhood must have been like in the GDR (which is called DDR in German, hence the name of the museum).

What rules did people follow (the official ones and the unspoken ones), what products did they buy in the shops, and how did they live in East German cities like Dresden, Leipzip, or Jena?

At the DDR Museum, we were able to explore all this and a lot more together with the children. For them, this is an important part of their family history, because my in-laws both fled the GDR as children. They were just two of many thousand Germans who crossed the border in the darkness of the night, taking nothing more with them then the clothes on their body. With the knowledge that their life was at risk and that there was no option to return to their friends.

DDR Museum Berlin: Where Objects Speak for Themselves

As it happens, the DDR Museum is one of the most popular attractions in Berlin at the moment. It’s a busy place, and one doesn’t have to spend a lot of time inside to understand why people are intrigued about the former state of East Germany. All areas of public and private life in the GDR are on display – schooling and housing, education and politics, media and entertainment. There are lots of interactive displays to explore, which makes it so much more fun for the children.

We open drawers and find an old school bag inside – an original, as are all of the exhibits in the museum. We are free to open the bag, explore the insides. We find an old school book, Russian vocabulary, the words neatly written in ink on the lined paper.

There is a small room with toddler’s toys, tiny chairs, children’s books – examplary for one of the many kindergardens that were integral part of the GDR system as it allowed women to return to work after having babies. 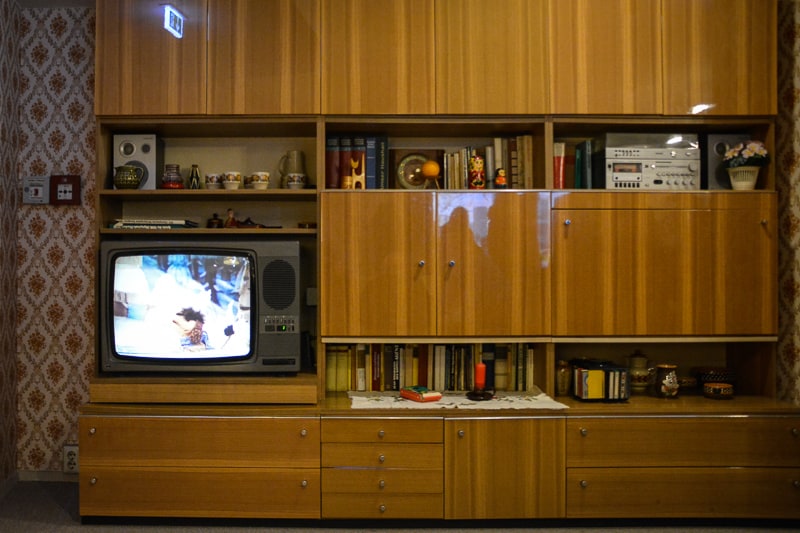 Many times we can hear German visitors mutter, “Just like what we had back then”, or, “Remember? We used to have exactly the same thing at home!” There is a certain nostalgia in the museum, a trip down memory lane to what certainly must have been warm childhood memories for many visitors present that day.

But of course, there were also the bleak and nasty sides of East Germany. You only have to have a quick look at the Stasi prison cell to understand that life in the GDR was no holiday when you didn’t conform to the rules or even when there was suspicion that you had done something wrong.

It must be incredibly hard to set up a museum about a time and a system that many people have witnessed firsthand. You want to stay objective and present the facts in a thorough way. Omission of certain aspects would be a grave error. Downplaying issues could offend.

At the DDR Museum, luckily, we felt that the topic was presented in a fair and balanced way. Visitors can draw their own conclusions based on what is presented – which is a lot.

The DDR is no more, and I am glad about it. Nothing good has ever come from building walls. Museums like the DDR Museum help future generations understand the repercussions of segregation, isolation, and secession. Definitely a place that should be included in your Berlin itinerary when you want to learn a little bit about Germany during the Cold War.

Berlin Family Holiday: An Unforgettable Week in Berlin With Children

Beauty and Tranquility at Monasterio de San Jerónimo in Granada