Bodrum Castle is one of the most visited attractions in Bodrum. And we think that’s justified. Because there are some perfectly good reasons why you should throw in a history lesson or two while you are holidaying in Turkey.

When we visited Bodrum we soon realised that the town was not just a pretty holiday resort. It is also steeped in history. Bodrum is home to one of the Wonders of the Ancient World, the Mausoleum at Halicarnassus. A monument so extravagant that its reputation would survive the turmoils of time. Unfortunately, the same couldn’t be said of the mausoleum itself.

The former grand tomb is today reduced to its foundations. Most treasures are in the possession of the British Museum in London. The building stones taken to be used elsewhere. Ironically, this means that in order to see the remains of the Mausoleum you actually have to visit the second most important historic site in Bodrum, Bodrum Castle.

The Traces of a Lost Wonder of the Ancient World

In the Middle Ages, the Knights of St John, also known as the Templars, decided that a new mainland stronghold was needed to protect the Christian world from Ottoman invasion. They used the site of an existing fortress to build one of the biggest fortifications of their order, Bodrum Castle.

And while it would have been possible to source building material from elsewhere it made perfect sense at that time to simply use the stones from a nearby ruin. An economical decision because the stones were close, easy to transport and already shaped into boulders that were good for construction.

One: Bodrum Castle was a Stronghold of the Knight’s Templars

The Knights of St John are a fascinating organisation. We had learned a lot about them during our visit of Malta the year before. The knights ruled the island nation of Malta after they had been expelled from the Holy Lands. They also had strongholds in different parts of Europe to strengthen their influence.

Originally, the Order’s main responsibility was the running of hospitals for pilgrims in the Holy Land. Hence they were also known as the Hospitallers.

But they soon developed into a military order. Now they took charge of defending Christianity from the threatening powers of the Muslim sultans.

An international organisation through and through, one could say the first pan-European organisation. Noblemen of France, Germany, England, Italy, Spain would work together with surprising efficiency for the common goal. The upholding of Christian influence in the Eastern Mediterranean region. 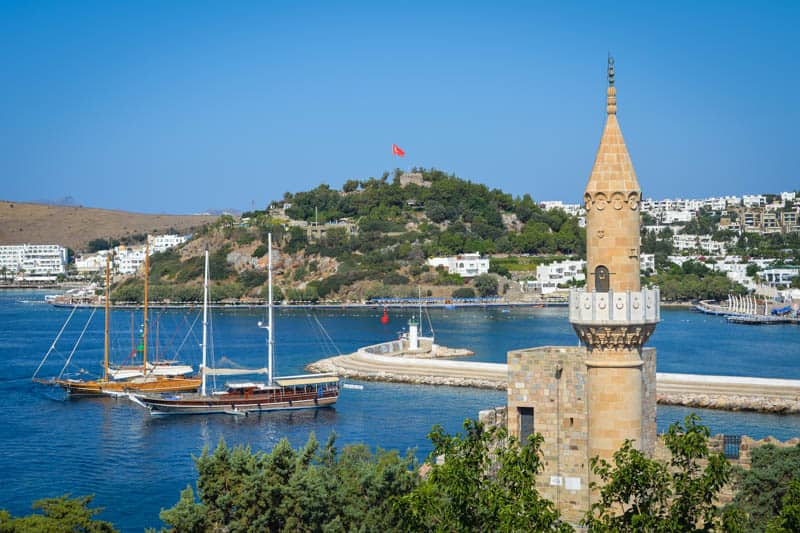 Two: A medieval fortress as you would expect to see it in Central Europe

Yet, there is more to see at Bodrum Castle than just the traces of the rule of the Order of St John.

Even today, Bodrum Castle is an impressive structure in the heart of the Turkish seaside resort of Bodrum. It is indeed as big on the inside as it appears on the outside. To our delight there is so much to see here that you can easily spend a whole morning inside its strong walls. A perfect medieval fortress complete with towers, ramparts, and coats of arms galore.

Bodrum Castle is a medieval castle par excellence. Built to repel and to confuse invaders, it comes with all the contraptions that a fortress of that time was expected to have.

The most impressive part of the castle, however, is probably the English Tower. It looks oddly misplaced in the Turkish heat with its English flags and classic fireplaces. You can clearly see the names of English knights inscribed in the stones, the coat of arms of important families everywhere. The deep window seats of the tower might just as well overlook the Sussex countryside.

And there is more to see. A dungeon at the end of a steep and forbidding flight of stairs, cut deep into the underground of the castle. Rows of medieval toilets. A jumbled setup of access points, meant to confuse intruders in case they were trying to force their way in. A chapel in its centre, now graced with a slender minaret that is decorated with the half moon.

Despite the impressive fortifications the castle was soon lost to Sultan Suleiman. It wasn’t invaded but after the conquest of another Templar stronghold, the Castle at Rhodes, Suleiman also demanded the keys to the Castle of Bodrum.

The Museum of Underwater Archaeology which is housed inside the castle comes somewhat as a bonus offering to the already satisfying experience of a castle visit.

To be honest, archaeological museums can be dead boring. Who in their right might would find glass cabinets filled with shards and rotten metal pieces fascinating? But the museum at Bodrum is actually much more interesting than that.

Centuries of seafaring activity in Asia Minor has lead to a rich treasure trove of shipwrecks just off the coast. Ships that were carrying goods from all ports of the then known world. Amphoras, of course, but also glass. Coins and statuettes, weapons. Everyday items like cosmetic boxes. The items that were salvaged from these Bronze age ships are indeed impressive and unique.

A jewellery box, for example, shaped as a seabird whose wings can be folded away to reveal the treasures on the inside. Axes with handmade carvings of fish, maybe to show ownership or a manufacturer’s brand. Artistically illuminated glassware that is displayed in a dark room to bring out the colours.

In the chapel which is located in the centre of the castle you can actually walk inside a replica of an ancient ship. A great way to get a feel for the atmosphere and the cramped space on board an ancient trading vessel. Another replica ship has been cut open lengthways and displayed along a wall. Here you can see how a sunken ship would break up and reveal its insides on the seafloor.

Underwater archaeology is a discipline in its own right with very unique challenges and results. Seeing this firsthand in a museum that is dedicated to the work of underwater archaeologists is definitely something worth checking out. Click here for more info about the Underwater Museum.

Four: Marvellous Views From Bodrum Castle and a Mediterranean Garden

Maybe the medieval history and the underwater treasures are not usually what would inspire you to visit a place. But inside the walls of the castle you will also find an impressive Mediterranean garden. It is said to display all species of the local region in one place.

A shady Garden Eden, populated by peacocks and flowering bushes. Picturesque stairs that connect the different levels offer new perspectives over the site. Perfect for a leisurely stroll around the grounds in your own time.

What we however loved most were the views from the castle over the marina. The sea shimmered in an incredible palette of blues and green. So crystal clear that we paused for a moment on one of the ramparts of Bodrum Castle to admire the incidental views. 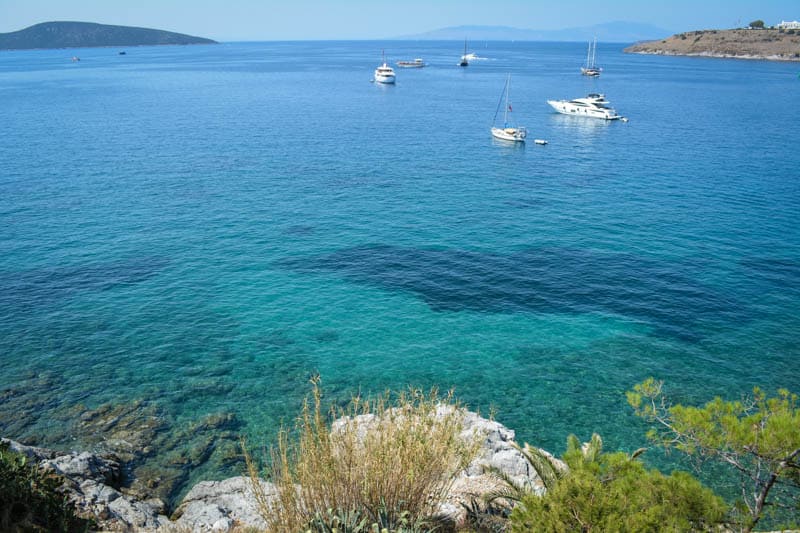 And here are some more photos of Bodrum Castle: 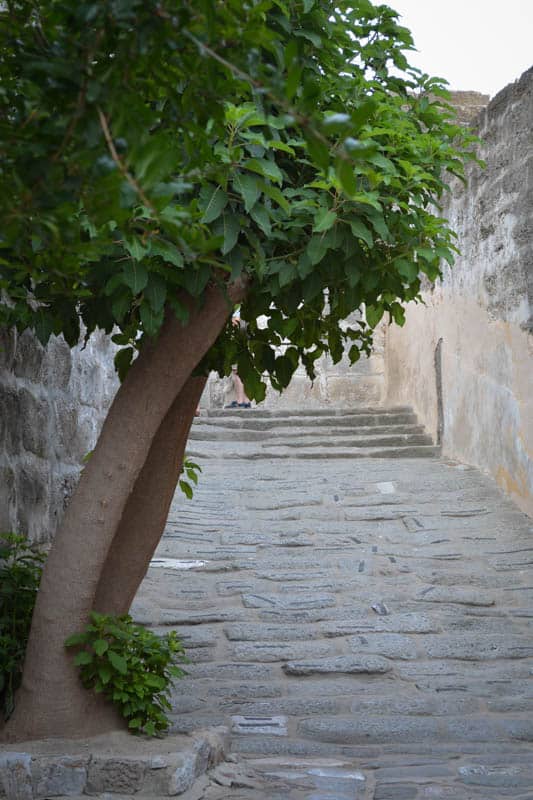 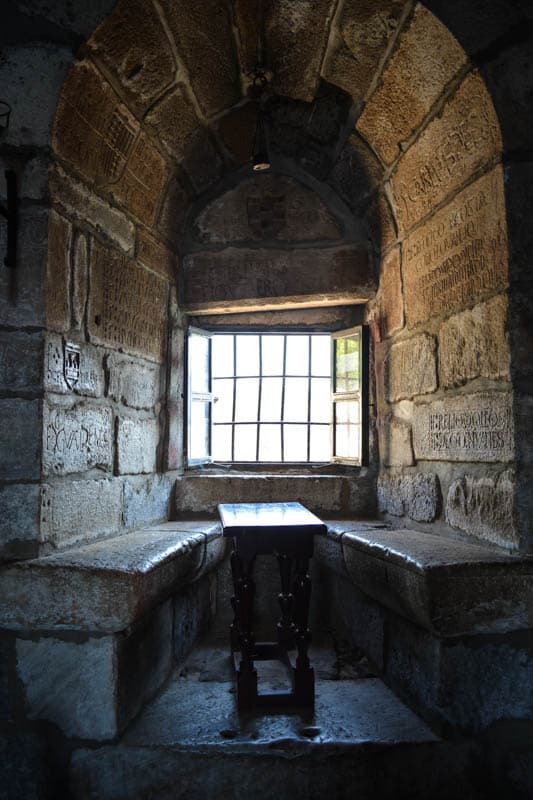 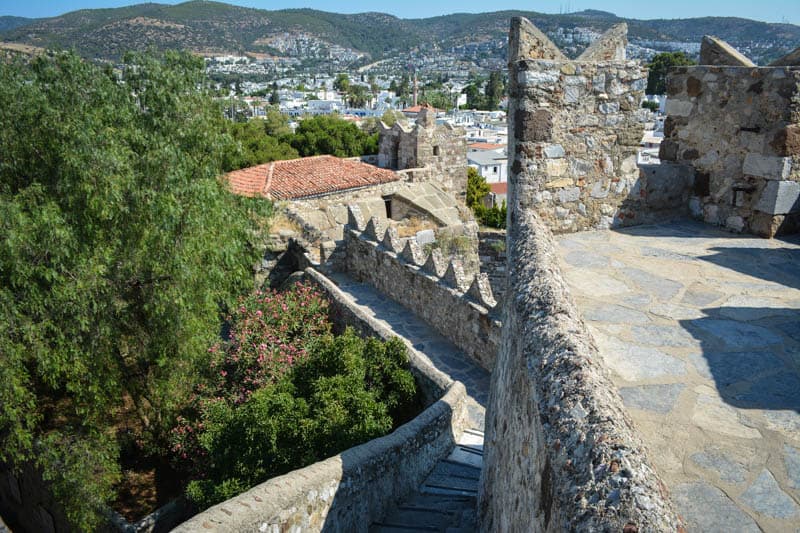 An exploration of the Cretan soul

Beautiful Chania: A showroom of cultures