Compared to other West European capitals, Berlin still remains a relatively cheap destination. Of course, you can easily spend a lot of money while there. But there are also a lot of free attractions in Berlin that you can visit. In this post I will try to explain to you what to do in Berlin when you are on a budget.

As a local travel blogger, I am always on the lookout for exciting and new Berlin attractions that are free to visit. So, in this list you will find not just free things to do in Berlin but also some off-the-beaten-path ideas.

After brainstorming for this guide I came up with a total of 100 free attractions! To make it easier for you, the list is split into themes: A) Free museums and attractions that are indoors (perfect for rainy, cold and windy days), B) free outdoor things to do, C) my most favourite parks and playgrounds (great for families and hot days), D) interesting self-guided walking tours, E) exciting street art hotspots, and F) the best lakes for summer.

Lastly, I also added some cool money-saving tips for your next trip to Berlin – how to eat and drink cheaply, get around, and save money when visiting the major sights.

A) Free Museums, Attractions, and Stuff to do on Rainy Days in Berlin

Berlin has a wide variety of museums, some of them are even UNESCO world heritage listed. Unfortunately, those museums that are well known, in particular the Museum Island museums, are not free to visit. Rarely will you find a day where they will open to the public for free.

However, there are many more museums in Berlin that are indeed free. I have included these museums in this list, together with many other free indoor attractions. 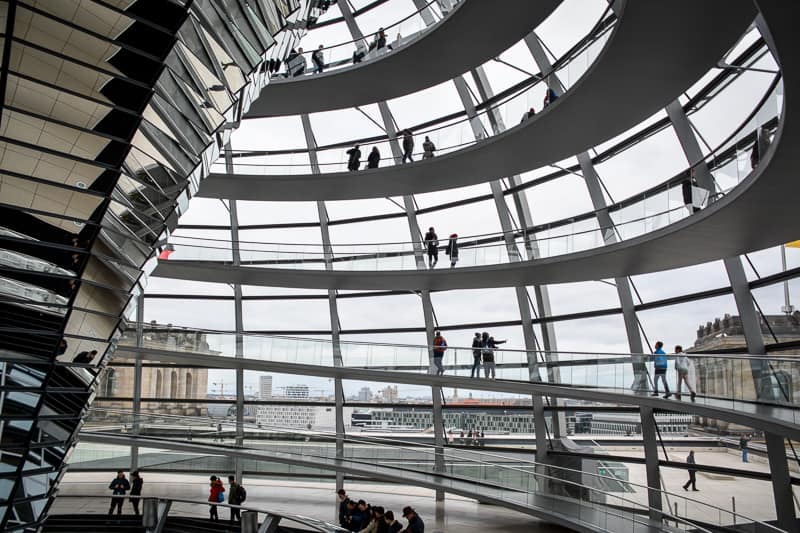 The Reichstag Dome is one of the many free attractions you can visit in Berlin. 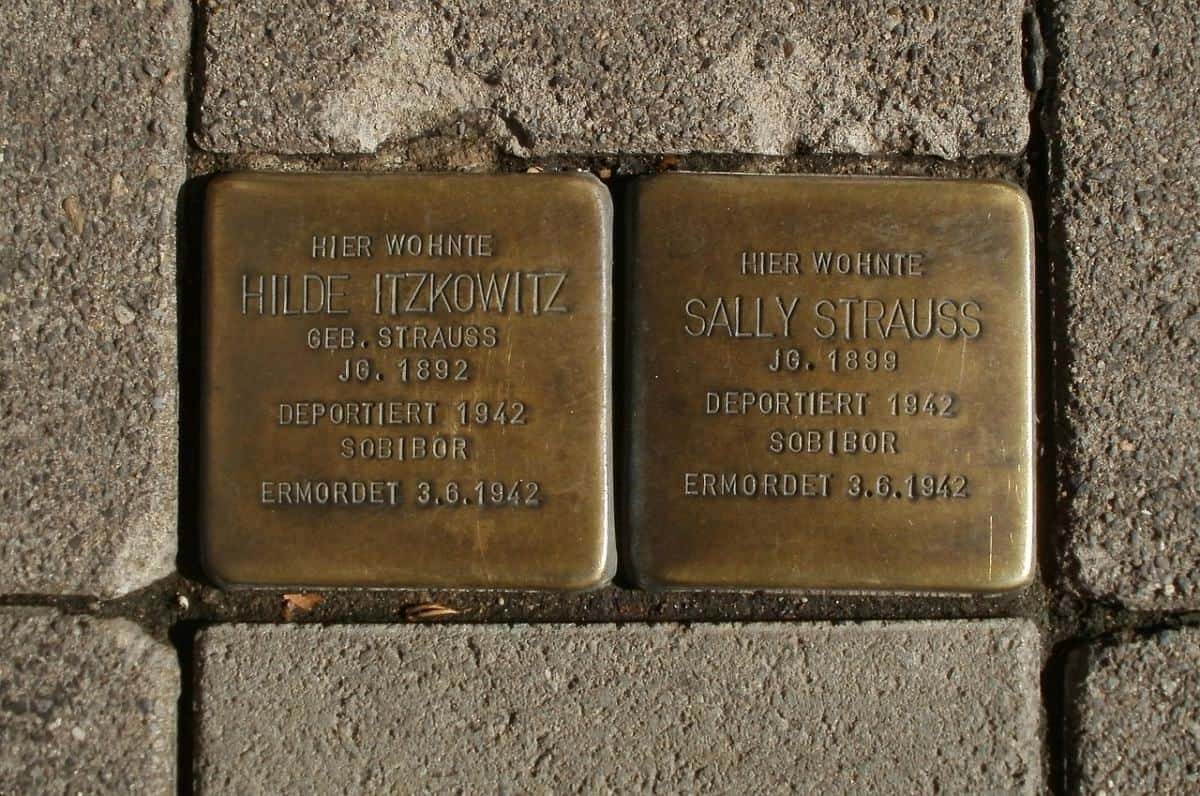 Stolpersteine can be found all around the city. They commemorate Jewish citizens who lived at these addresses and their fate during the Nazi regime. 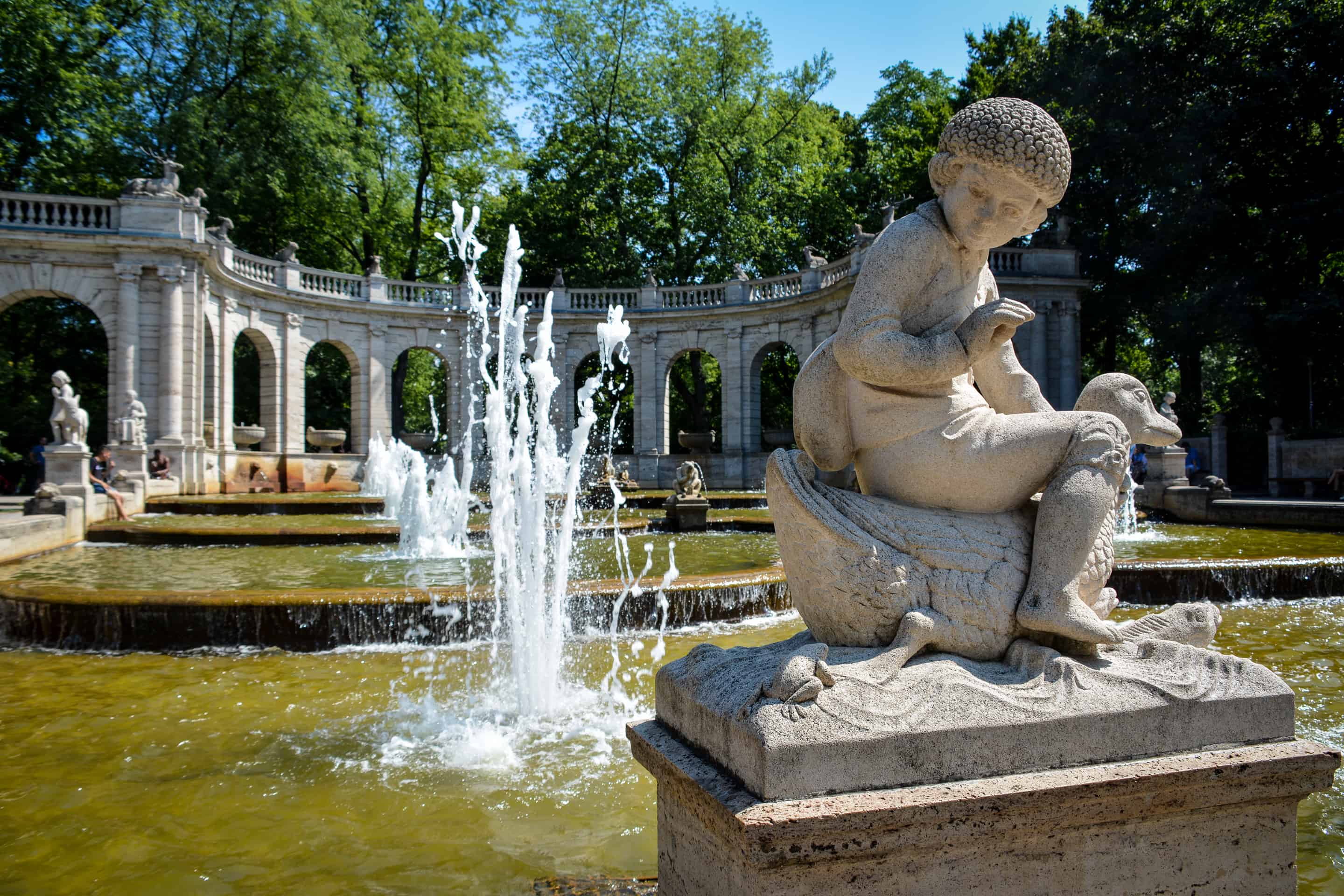 The Fairytale Fountain in Volkspark Friedrichshain is one of the highlights of this big park in the city’s east.

Despite its urban flair, Berlin is a green city. Lakes and forests offer lots of day trip opportunities. There are the River Spree and Landwehrkanal cutting through the urban landscape like blue ribbons. Small leafy squares and playgrounds add welcome places of relaxation and respite.

See in this list which parks are particularly beautiful and easy to reach!

There are many places to hang out in summer. One of the most popular ones is on the banks of the River Spree.

A walk along the broad Berlin boulevards or on the banks of a canal can be among the most relaxing things to do in Berlin. The city has some very charming areas which are best explored by foot. These self-guided walking tours will help you discover a very different side of the city. 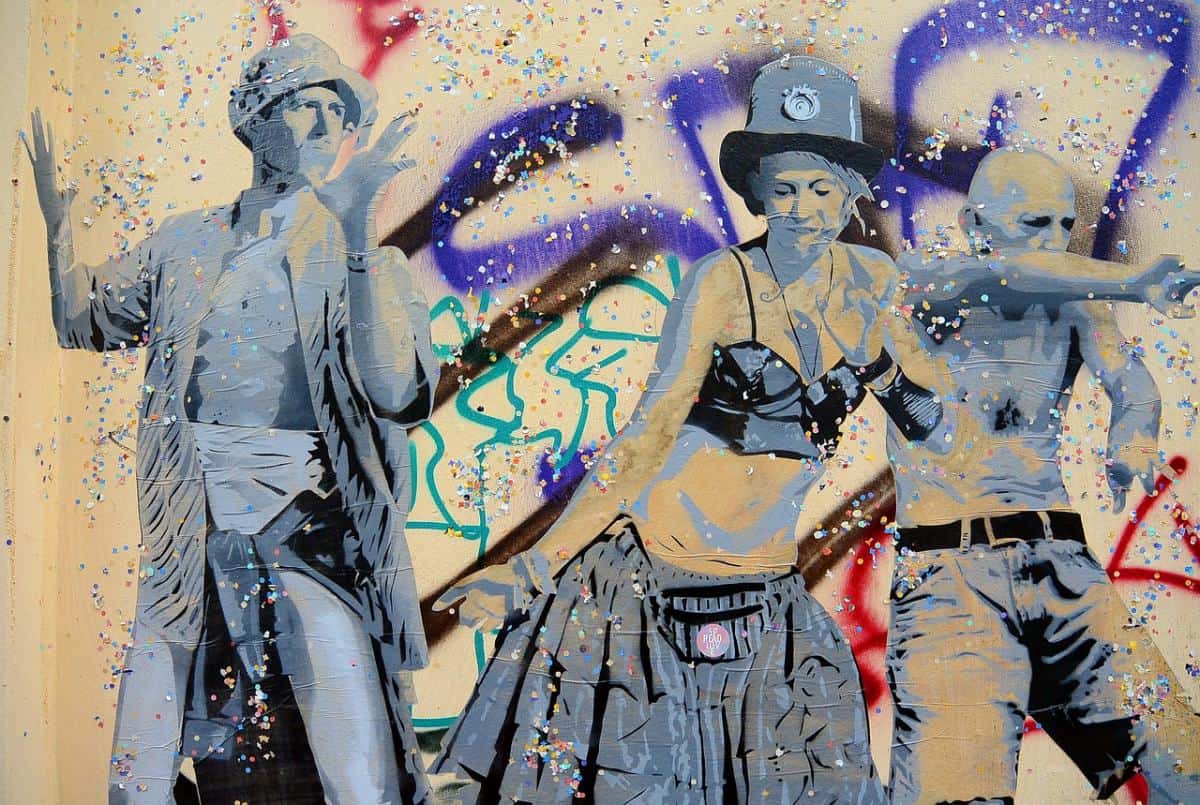 Berlin is famous for its exciting street art. Kreuzberg is a great place to start if you are on the lookout for the latest works of renown artists.

Street art is part of Berlin just like currywurst and tourist bashing. If you want to know what the latest trends in the art world are, you cannot close your eyes from the innovative, provocative and oftentimes funny urban artwork that celebrate the city. There is no real hotspot for street art in Berlin but if you have a look at the inner suburbs and neighbourhoods such as Kreuzberg, Friedrichshain and Hackescher Markt you may get lucky.

Here are my top spots for street art in Berlin. 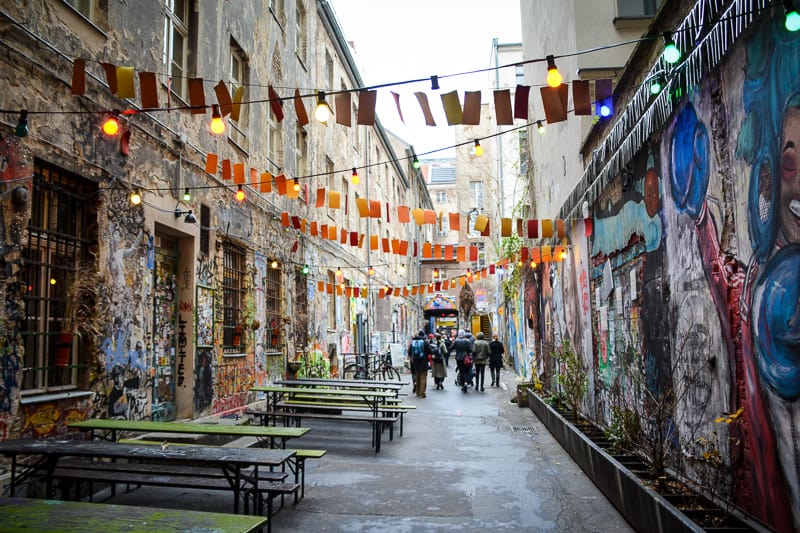 Street art is a big thing in Berlin. There are a couple of hotspots you can explore like this one at Hackescher Markt. 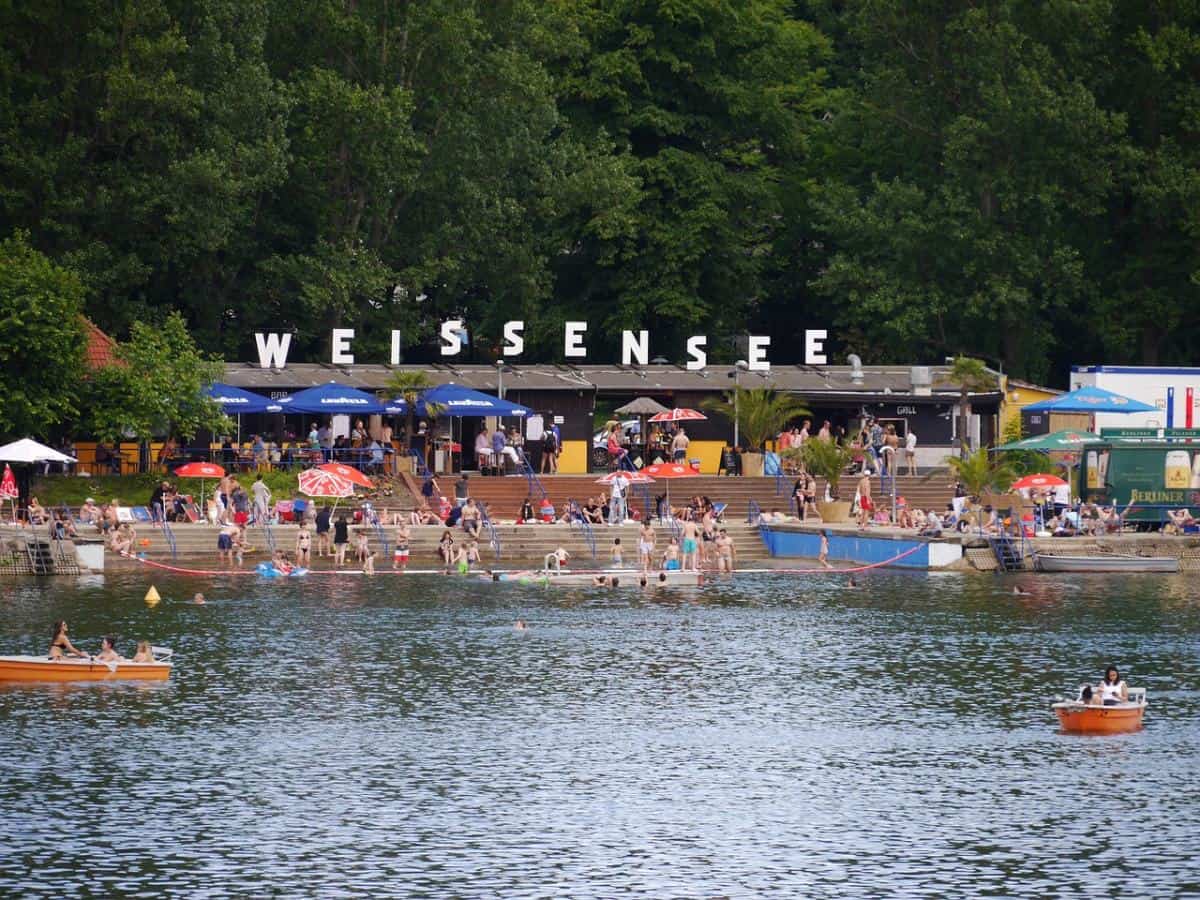 On warm summer days, Berliners like to spend their free time near one of the many lakes in the area.

The Best Lakes in Berlin

Berliners love their lakes. They tend to freeze over in winter and you may get the chance of ice skating on them. In summer, they turn into free open-air swimming pools, surrounded by nature. Between these two extremes, they are still beautiful places for relaxation and reflection. This list contains the best Berlin lakes that you may want to check out when staying in the city for a little while longer.

Berlin offers something for everybody. You can dine like a royal and sleep like a king, or you can go basic and enjoy the adventure. Trust me when I say that most Berliners live a very ordinary, down-to-earth lifestyle and that they do everything they can to save money in the process.

If you follow some of the tips below, you too will keep your budget under control and make this trip to Germany’s capital an affordable reality. 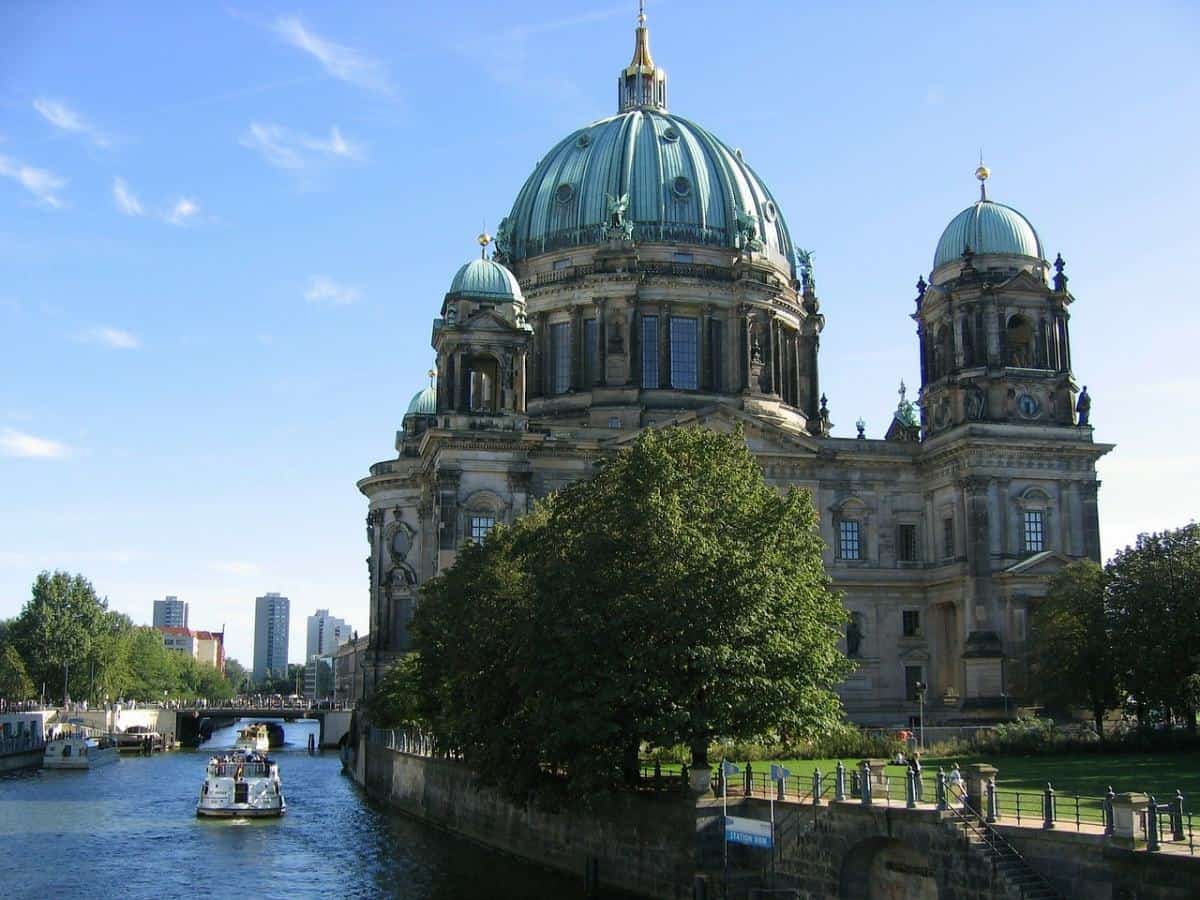 Summer is beautiful in Berlin. There are so many things you can do outside that I am sure you will never get bored.

Get a Travel Pass

In Berlin, chances are that you will want to visit many different things that are not close together. Since distances can be wide, you will need to get around somehow. Luckily, a car is not needed because public transport is efficient and cheap. Look out for tourist passes that will allow you to ride busses, trains, trams and subways. They start at 7.00 EUR for one day, up to 5 days (they get cheaper the longer time they cover). Both, Berlin WelcomeCard and Berlin CityTourCard will also offer you discount for some of Berlin’s best known attractions. You should look out for tickets that cover zones A and B which will allow you rides within Berlin including the suburbs but not outside (Potsdam or Schönefeld Airport, for example). Click here for more info.

There are plenty of tour operators in Berlin that offer the popular hop-on-hop-off bus tours around the city. Add to that a plethora of themed tours such as vintage tours, Trabi tours, and bike tours. But the easiest and cheapest way to see the city is by simply taking an ordinary bus that passes many well-known Berlin attractions. Bus 100 starts at Alexanderplatz and ends at Berlin Zoo. Between these stops you come past sights such as Brandenburg Gate, Reichstag, Bellevue Palace, Victory Column and KaDeWe. Alternatively, bus 200 drives by Alexanderplatz, Museum Island, Potsdamer Platz and Kaiser Wilhelm Memorial Church. Since you are already owner of a Public Transport Pass (see above) all of this sightseeing will be free of charge. 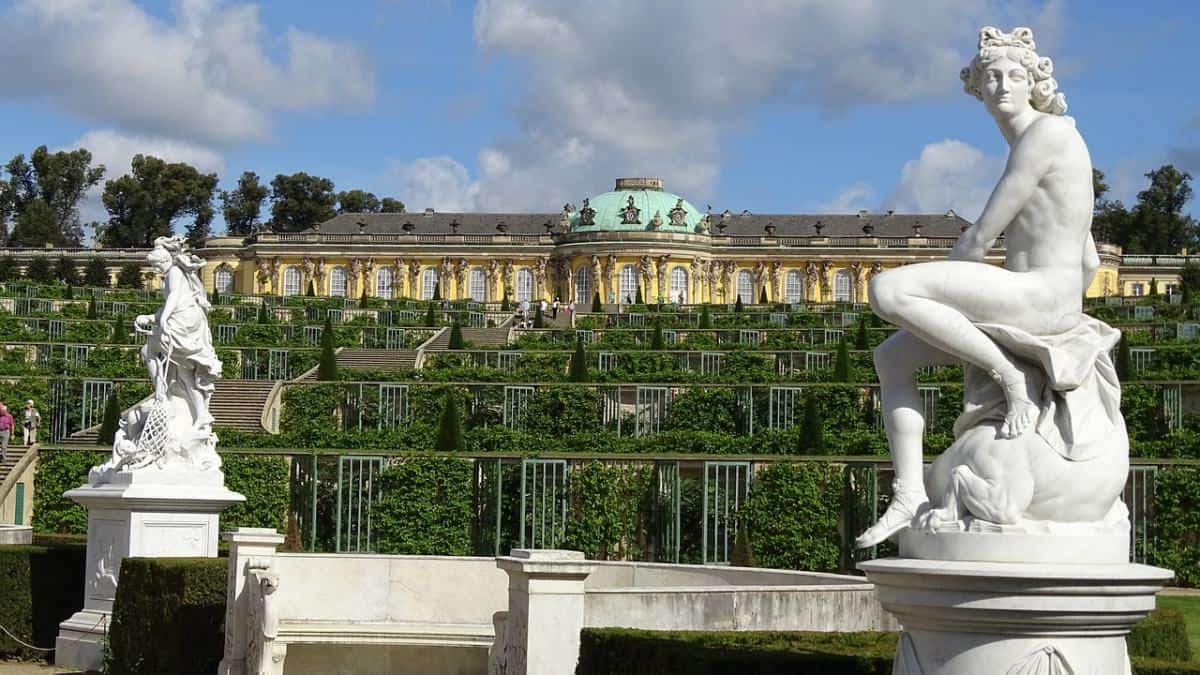 Potsdam is a great day trip destination from Berlin. While access to Sanssouci and other palaces is at a cost you can still visit the many beautiful parks for free.

Take the S-Bahn to Potsdam

The city of Potsdam is just outside of Berlin and can be easily reached by public transport. Just buy an extension ticket for zone C on the day that you would like to travel and enjoy the ride! Potsdam offers plenty of free attractions such as the Dutch Quarter, Sanssouci Parc and the beautiful villas of Berliner Vorstadt.

Shop at Supermarkets for Food and Drink

With the exception of the historic centre of Berlin around Museum Island and the Government Quarter, you will find plenty of supermarkets around. They offer great value on food and drinks including alcohol. In the front, there is usually a section for business people who are looking to grab a quick lunch: salads, wraps and cold meats. A word about alcohol: Drinking alcohol in public areas is not forbidden in Germany (as long as you behave). So particularly in summer you will see many people in Berlin’s parks and squares enjoy the warm evening breeze with a bottle of beer or wine in hand. It will save you the cost of going to one of the bars in town. Having said that, depending on where you end you partying at night, bars in Berlin can be pretty cheap too.

Make use of the Museum Pass

You’ve come all the way to Berlin but don’t want to miss out on the museums of the UNESCO world heritage listed Museum Island? Don’t worry, I understand. If you are keen to explore the cultural treasures from around the world that are displayed in Berlin, do yourself a favour and purchase a Museum Pass. For less than 30 EUR you will gain free access to 30 Berlin museums including Pergamon Museum and Old National Gallery over the course of 3 days. To get your Museum Pass now, click here. (Affiliate Link)

Introduce Currywurst to Your Life

When it comes to cheap eats in Berlin, currywurst is probably the best thing to try. Invented in Berlin (some say), you will even find a museum dedicated to the quick sausage dish in the city (Click here to read more about the Currywurst Museum). Buy it at any street vendor: For around 3.50 EUR you get a full meal consisting of a cut bratwurst with ketchup and curry powder, french fries and optionally ketchup and/or mayonnaise. Definitely not the healthiest option, but definitely cheap and delicious!

Have a BBQ in a Park With Friends

Staying with a group of friends and the weather is warm and beautiful? Get yourself one of these one-way aluminium BBQ sets and head for the nearest public park. Lighting a fire is not allowed everywhere but you can have a BBQ in some selected green spaces, for example Monbijou Park, Volkspark Friedrichshain and Mauerpark. Please ensure you stay within the designated areas and clean up after yourself.

Stay at a Hostel

There are quite a few good quality hostels in Berlin which offer dorm beds as well as private rooms. My favourites are Wombat Hostel, 25Hours Hostel, Generator Hostel and Circus Hostel. Click on the links to check rates and availability. (Affiliate links)

Free Berlin Guide: There Really are Hundreds of Free Things to do in Berlin

Berlin is a great destination for any budget – there are hundreds of free things to do in Berlin. Every day, new attractions pop up and free events are being scheduled. Look out for street parties such as the Carnival of Cultures (June), Christopher Street Day (July), International Beer Festival (August), and New Year’s Eve at Brandenburg Gate (December) to spice up your stay in the German capital!

I hope you liked this article. If so, don’t forget to sign up to the newsletter below for more fresh ideas in Berlin and all around the world! Found a mistake or outdated information? Send me a message!

Berlin Family Holiday: An Unforgettable Week in Berlin With Children

Berlin With Kids: A Comprehensive Travel Guide for Families

Where to Stay In Berlin: Choosing the Right Neighbourhood

Oranienburg near Berlin: Sweet Dreams of Summer at the Palace Park